March madness socked Cranleigh and surrounding villages right between the eyes, shutting roads, closing schools and offering a new generation of children their first ever experience of a deep freeze – something they will surely always remember.

The much-predicted ‘Beast From The East’ hit us lightly by comparison to many communities. But by coinciding on the first day of last month with Storm Emma it caused havoc among bird populations. People who provided food and water for hungry birds were rewarded with rare garden visitors. Ravenous Fieldfares overcame their normal shyness. ‘Chock-a-chock-chock’ they cried as they flocked in excitedly from the fields to fight over apples awaiting on the snow.

Other winter visitors, like the smaller Redwings, dropped in hopefully too. But finding themselves bottom of the Thrush pecking order, behind big brothers Mistle Thrush, Fieldfare, Blackbird and Song Thrush, they were forced to satisfy their hunger on leftovers of the ivy’s bitter crop. They crammed down enough to kill a human – but for them this meant sweet survival.

A poignant sideshow drifted in with the snow that morning. I saw a handsome male Bullfinch pathetically doing its best to chew some nourishment from dried and wizened blackberries on the bramble patch.

Dazzling Redpolls, Siskins and Goldfinches were fighting for a foothold on the feeders. Their frenzied feasting attracted unwanted attention and was sharply interrupted by the sudden arrival of a male Sparrowhawk who thought my feeding station was set up for his benefit. Luckily the Blue Tits sent out an air raid warning for the ‘little fellas’ just in time.

Everything escaped and the hunter sat on a branch looking puzzled. It was as if he had just been duped by a magic disappearing act and could not work out where his lunch had gone. He headed off empty handed.

In other gardens the crazy conditions brought once-in-a-lifetime memories. A friend in Pulborough saw a Cetti’s Warbler on a neighbour’s doorstep. They are normally skulking in marshy reed bed habitat.

Meadow Pipits – no garden lovers, these –ventured in for porridge, and some lucky observers even saw the usually secretive Woodcocks foraging in their flowerbeds.

Elsewhere a ravenous Water Rail, finding its usual dining room covered in ice, forgot its shyness. It strode forth to probe beneath the legs of another astounded, and frozento-the-spot, birdwatcher. Starving birds, like us, will do what it takes to try and live.

Up in the sky though, a battling performance largely unseen from the ground, was underway. Larger birds were fleeing the strong east-northeasterly winds to try and escape the blizzard and icy blast.

Many of these were waders, involving over a dozen different species in Surrey, and most were birds you would normally expect to see only on coastal estuaries. Some were forced down to try and find something to feed on along the edge of our lakes and ponds, or rock-solid fields. For a few it proved a hopeless task and they never flew again. During that horrendous morning, birders throughout the county and beyond were reporting a notable movement with many hundreds of Lapwings flying south west to escape the storm and the -11 windchill.

Eventually, at 11.30am, I witnessed a 10-strong Lapwing flock fighting hard to stay on course. This was the first sighting of this species over my garden for several years but seeing them like this was not such a happy occasion as before.

These birds were suffering. It was all too easy for their broad wings to catch the howling gusts and this sent them swirling and tumbling high-up in the snowstorm. Each time they were buffeted by the strong wind they had to circle round to get back on course. 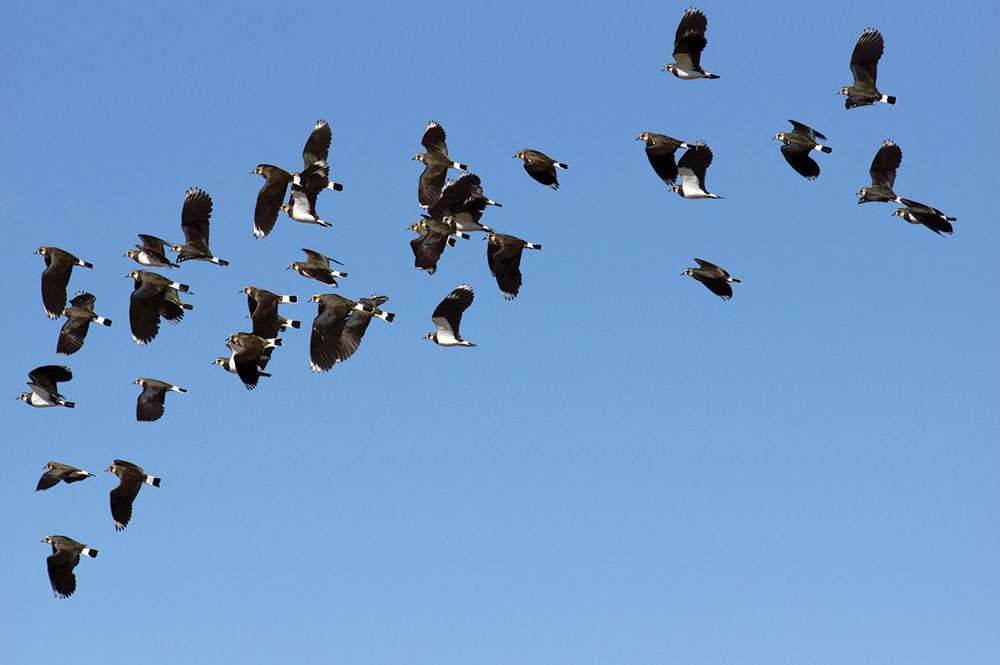 Gradually they progressed to become specks until they disappeared behind the house roofs. I wondered how many miles they had come. Possibly hundreds. And how many more they would fly before finding safety. I would like to think they made it – to wherever.

A few days later I was much encouraged to find 126 Lapwing sheltering and feeding in a kale field off Run Common Road. There were survivors! I wonder where they will end up once winter moves on. One ringed in Ewhurst in 1961 was found dead – shot or killed by man – seven autumns later in Dukhovshchina, Smolensk, USSR (1,377 miles away).

To see over 100 around here is a good count because the species has been declining for years and is now on the official Red List as a near-threatened species. Two decades ago it was a common resident, winter visitor and passage migrant and flocks of 200 could be regularly seen. My record count on village fields was 850 during an Arctic blast in February 1999.

On the ground is the best place to see this wader for it is a most impressive bird. Afar off it looks mostly black and white. But closer in it shimmers with a metallic green, blue and purple sheen to the wings, orange under the tail, and a long crest like a navigation aerial.

The Lapwing is also called the Peewit, after the sound of one of its far-carrying, shrill, piping calls. Sadly, changing farming practices and the loss of damp meadows and fields have sent its numbers plummeting.

If you are out walking this Easter then watch out for it. It is a super show off in the air, especially around this time of year, when the male performs diving aerobatic displays of a quality not seen around here since British Aerospace ruled the skies above Dunsfold Airfield.

Don’t forget to remember the Lapwing on Easter Sunday when you taste your eggs! It is the iconic Easter bird. And did you know it is behind those Easter bunnies too?

Before chocolate eggs were available, countryfolk at this time of year would search the fields to harvest Lapwings’ eggs from little scrapes in the ground.

Birds would often nest in the same hollows used by hares so it was not unusual to see this mammal hopping away during egg hunts. When people found its droppings alongside their prize it led to a belief that hares laid eggs.

The ‘Easter bunny’ should have been a hare! But it was considered wrong to associate the biggest Christian event with an animal that also had ancient Pagan worship connections. So, the term ‘Easter bunny’ was hatched instead.

Back Kitty – A New Life in Food
Next An end . . . and a New Beginning
Related Articles
No Comments