If they were rarities then birdwatchers would travel hundreds of miles to see them. Starlings!

Surely most people can identify one. A little smaller than the Blackbird and the adults are blackish. Quite drab really.

But perhaps we are too familiar with what is still a common bird in our gardens. Um, look again, close-up when one is on your bird table or strutting across your lawn and Sturnus vulgaris is anything but.

In fact, in summer the Starling is a surprisingly pretty bird, especially in the sunshine, when its oily looking plumage displays a startling metallic violet and green sheen, making it appear almost tropical. Its winter outfit is completely different with the yellow bill turning to grey and iridescent feathers becoming covered in small orange and white spots. Study closely and you will see many of these ‘spots’ are actually the shape of little love hearts, particularly striking on the ‘waistcoats’ of the juveniles.

And love ‘em we do – especially if we travel to the Somerset Levels or the piers in Brighton or Eastbourne near dusk. There you can witness ‘murmurations’ of thousands of Starlings acrobatically painting fast changing patterns across the sky. They rise and fall, twist and turn as one, then break apart into separate flocks before re-joining overhead. Take a brolly!

Starlings certainly get around and after breeding in our rooves or holes in trees they can disperse from the Cranleigh area in all directions. One ringed in Ewhurst was found dead in Belgium a year later and there have been recoveries from France and Germany too. 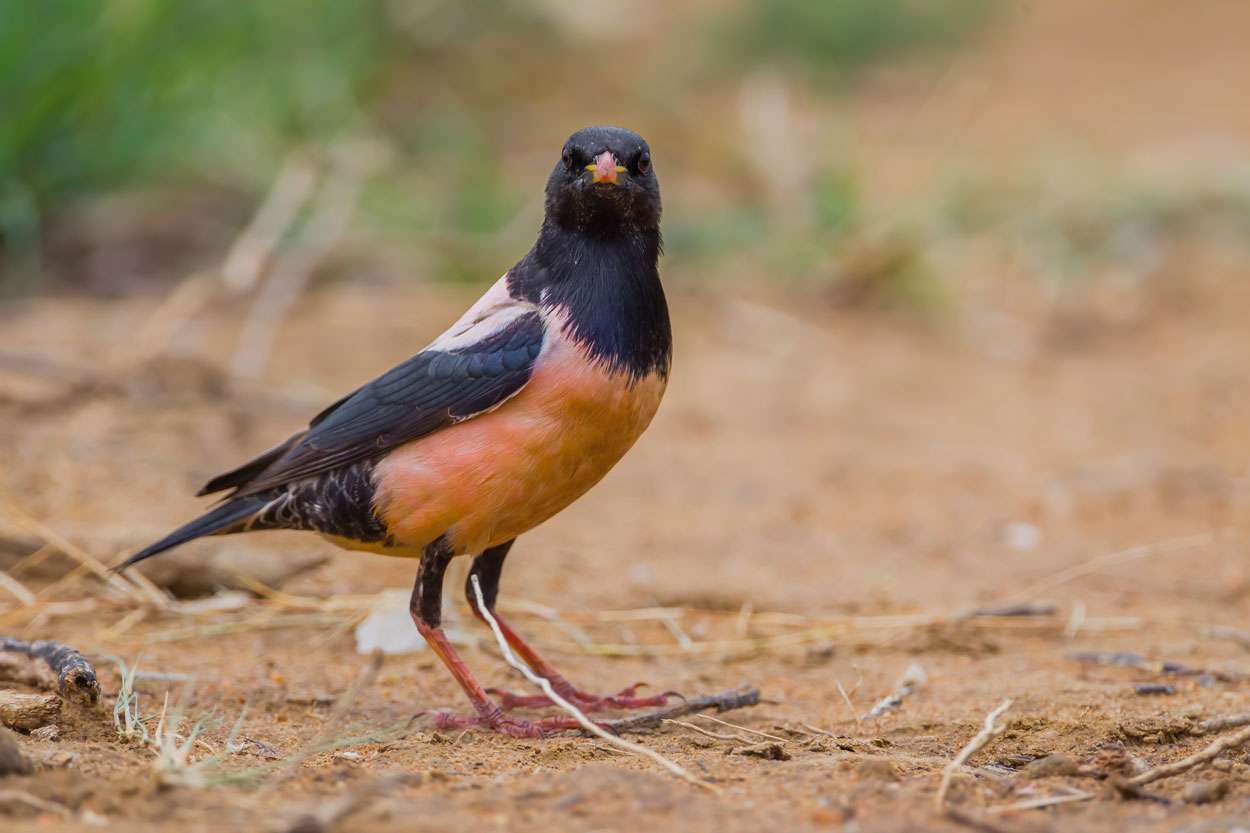 But they are getting fewer, like so many of our birds, and benefit from a helping hand from our feeders. I recorded in the 1990s how this bird appeared to be in trouble and that has since been backed up with similar reports in both the United Kingdom and northern Europe.

According to British Trust for Ornithology (BTO) surveys, Starling numbers have dropped by 66% since the mid-1970s and the bird is now on the national ‘red list’ meaning it is of high conservation concern and is a highly threatened species. Therefore, I afford it some forgiveness when it leaves its calling card on my car.

As you watch out for the Starling why not also keep an eye open for one of its ‘brothers and sisters’ that has been setting the birding world abuzz. In the last couple of months there have been sightings all around the country of the Rose-coloured Starling (Pastor roseus), alias the Rosy Starling.

This species breeds in temperate Asia and Eastern Europe. Last year I enjoyed seeing colourful flocks of hundreds feeding on insects in fields alongside the car as we drove deep into Georgia’s steppe country. They are meant to winter in India and tropical Asia. But some have taken a wrong turn this year.

Fuelled no doubt by an abundance of grasshoppers they have had a good breeding season and have ‘erupted’ to new territories. As I write there have been none in Surrey, yet, but I am still hopeful. 16 turned up in the week I am writing this, as far apart as Helston, Cornwall, to Cape Clear, Cork, Mainland Shetland, and, closer to home, Hailsham, East Sussex.

So why not one in Cranleigh or surrounding villages in the Surrey Hills? Lots of my birding friends have had the same idea on their patch but I admit it has been a bit tedious and time-consuming so far looking through every Starling flock we see to identify that they are ….oh, all Starling. Of course, it is inevitable that the moment you don’t look you will miss a Rosy. 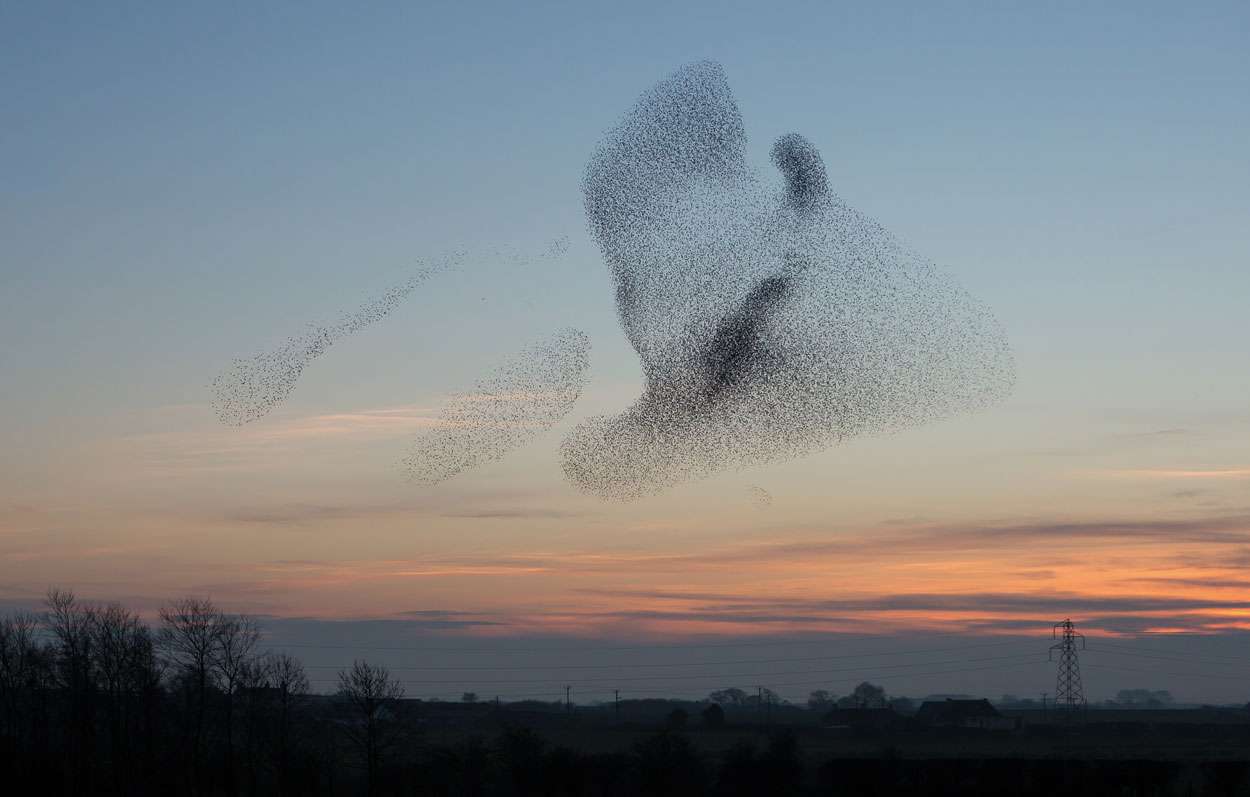 These essentially pink birds, with black wings, tail and crested helmet for the adults are a delight so I wish readers every success in finding one now that the alert is out. Get out the bread and suet.

Any birds visiting here could well stay much of the winter. The brown and shades of grey on the juvenile birds, which are the most likely to turn up, also give the bird another name. Birder on the Isles of Scilly in the 1980s coined the title ‘Pink Stink’ because juveniles were not as pretty as adults. Interestingly, its genus name Pastor apparently derives from pastor, the Latin word meaning ‘shepherd’, as in ‘pastoral’ but also as in ‘sheep.’ But they are not called pastors due to the adults looking priest-like. Fluffed up in winter they sometimes appear scruffy, as if wearing a sheep’s fleece like a shepherd.

Like their brothers and sisters, the Rose-coloured Starling is often found in gardens and around houses. I saw my first from a friendly lady’s kitchen in Southsea and my first Surrey one after the great gale of 1987, again in someone’s garden, at Christmas Pie in Normandy.

Thankfully, people can be most accommodating when a rare bird turns up to pay homage on their land. And no birders minds returning the favour by chipping in to help a host’s favourite charity by way of a thank you.

So if you think that’s the paparazzi outside because they know your little secret, don’t worry. It’s probably that they are birdwatchers. And there is a Pink Stink on your roof.

Back Tasting our Memories!
Next Memory Fading?
Related Articles
No Comments