One of our lookouts is the first to see them: ‘Hey, there’s three mysterious figures in the distance – and they are coming our way!’ We look up. So just who are these strangers? Right now we can only see their distant silhouettes under the blazing August sun. But as they come nearer their figures begin to take shape as they emerge from the heat haze. And all of them are on the ‘WANTED!’ list.

The first character we immediately recognise from the old days when we went searching across the border. Alert and aloof. An impressive sight quietly drifting against the sky. Poised for action like ‘the man with no name’. Head constantly turning in all directions. Piercing eyes peeled for a kill. Alongside is one of the noisiest individuals we’ve heard. Screeching alarmingly at us like an uncontrolled maniac. Body slim and streamlined. Moving fast now, this alien is on a mission – and heading right at us. And shuffling on behind – a chubby ruffian. By the look of him he’s not one any saloon bartender I know would welcome. Obviously an angry individual. Greets us aggressively with hoarse hissing and has a scary face. Just as well the grumpy fella wears a mask!

The trio may be strangers to these parts but now we’ve clocked them and we know exactly who they are. Meet… The Good, the Bad and the Ugly. Aka Red Kite, Ring-necked Parakeet and Egyptian Goose. While many other species are vanishing, these three relative newcomers to Cranleigh and the surrounding villages are increasing in numbers. 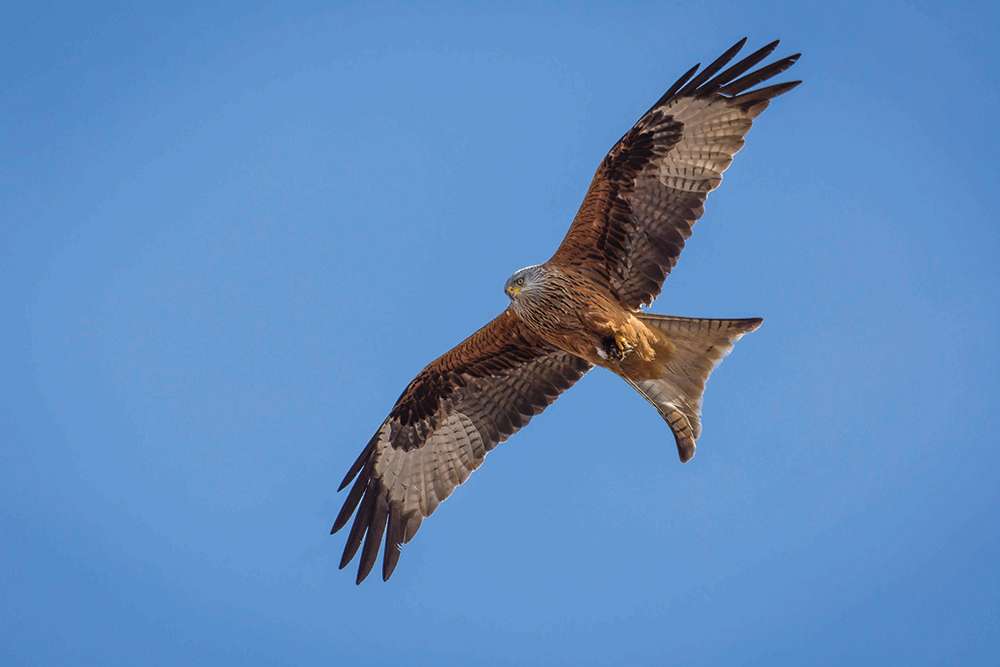 A day does not go by now in Cranleigh and the surrounding area when you can’t see the Red Kite over the High Street, our homes and neighbouring fields. Up until the 1980s we had to trek to this graceful beauty’s remaining stronghold in North Wales to get a glimpse. But its fortunes have changed and if you are driving up the M40 you will now see scores. The Red Kite was high on the ‘predicted’ list due to a doubling of county records over the mid-1990s following a successful Midlands reintroduction programme. I saw the first local record circling over woods at Baynards one May morning in 1999 when I was doing a breeding bird census for the British Trust for Ornithology.

Staying only two minutes, it drifted off north east, bringing the county total at that time to just over 50. A lot of people wished they’d been with me that morning but they did not have to wait long to see one in Surrey for themselves. Now this species has recovered dramatically and is a well-established resident. Watch out for Red Kites this month and next during harvesting. This is when groups of them circle opportunistically over the fields. Their orange-forked tails, like rudders, twist this way and that as they seek to snatch furry food dashing for cover from the noisy machines. 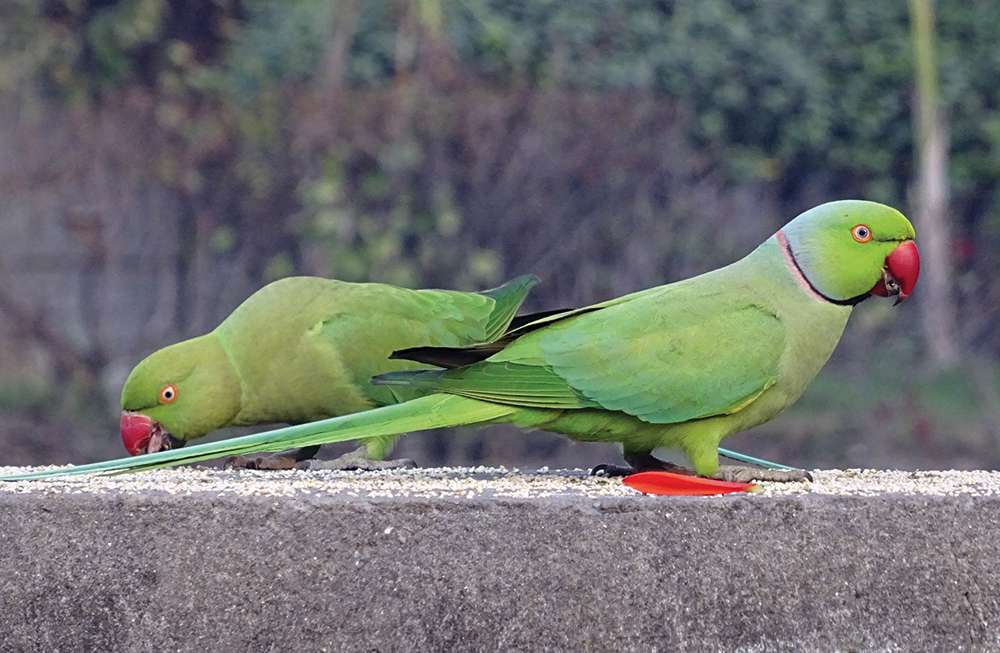 Ring-necked Parakeets, alias Rose-ringed Parakeets, are beautiful looking birds but don’t be deceived by these green monsters. They are bullies and should not really be in our part of the world at all. The reason they are here is because they were originally kept as pets in Victorian times – but enough escaped their cages to make a viable breeding feral population. Unfortunately they nest in holes in trees and so force out our native species. Ring-necked Parakeets hail from sub-Saharan Africa, north and east to India, and were only admitted to the official British list of birds in 1985. I saw my first Cranleigh one in August 1984 at Longpoles Road and there have been various sightings over the years since.

Lately most reports have come from the Forest Green area. Their presence is irregular and most of their visits seem to be ‘flypasts’ when they announce their arrival by screeching and hurtling across the sky like a long tailed falcon. They love peanuts so are regular visitors to bird tables where they take over and push out some of our other species that have greater need of winter nourishment. I have not known them to breed here, although they do at Betchworth and in the north of Surrey where flocks of over 7,000 have been counted at roost. Imagine the damage that lot would do to your peanut feeders! 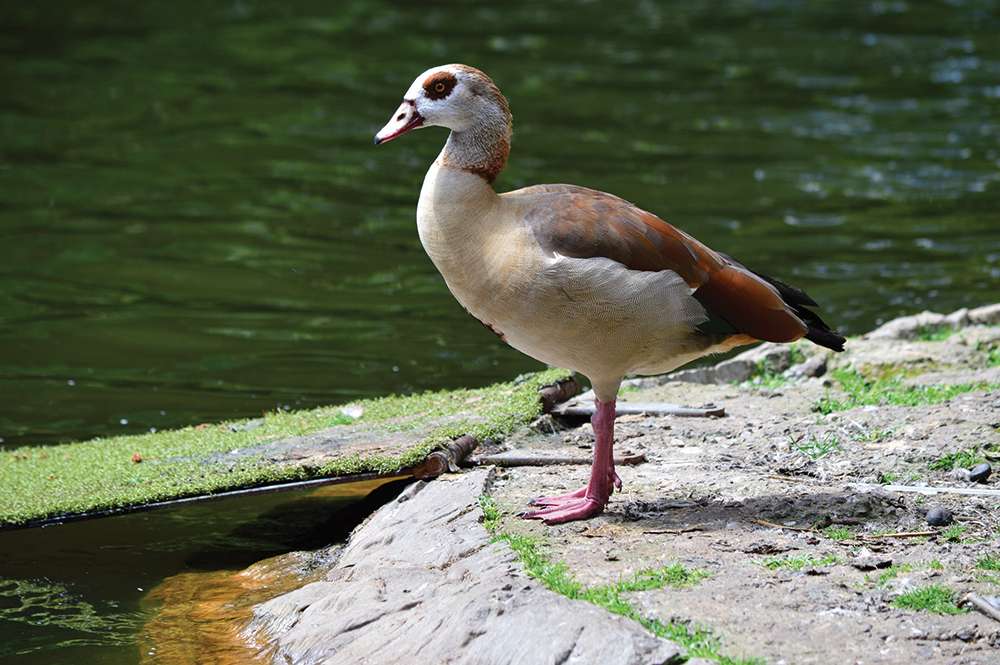 Another escapee appearing more regularly of late is the Egyptian Goose. And it is one of the weirdest looking birds I have seen. It has a face like a bandit and appears to have been designed in sections, each with its own version of brown, beige and grey. This species was introduced to Britain from Africa in the 18th century when it graced many a wildfowl collection. Of course many broke free and eventually the first pair bred in Surrey at Effingham in 1974.

Since the 1980s the Egyptian Goose has become increasingly common in the county but there were no reported records from Cranleigh until January 2010 when I saw a pair in a field off Knowle Lane. Subsequently there have been a number of other sightings on our golf courses and on large lawns, especially those near water. You can even see them standing lookout in trees. This odd bird favours a big hole in a tree to nest in. It’s best to keep your distance – Egyptian Geese are good guards and have even attacked and downed drones that got too close.