Geese are an increasingly common sight over and around Cranleigh. Greylag Goose numbers have rocketed in the last 20 years. From just the odd one or two pairs you can now regularly see flocks of 200 or more flying to and from their roosts in the mornings and evenings.

Canada Goose numbers are sometimes double that, and they too have enjoyed recent decades of breeding success on the many small pools and lakes in this area of Surrey. Many have benefited from the trend among landowners to fashion new ponds in their grounds and gardens.

Mixed winter flocks in the fields can attract other goose varieties – and visiting birdwatchers from further afield. The best was a scarce Surrey visitor, a White-fronted Goose from Arctic Siberia that I found in January 2002. This cold period enticed a number of displaced individuals to the southern counties.

Egyptian Goose (see The Good, The Bad and The Ugly Cranleigh Magazine August 2017) is also increasing in numbers and I’ve also had – no doubt feral – Barnacle Goose in the past and the highflying Bar-headed Goose, which has been recorded migrating over Mount Everest. The Cranleigh one would have been an escape from a collection, or the offspring of one that had.

Back down at sea-level, if you go to bird-rich areas like Pagham, West Sussex, at this time of the year you will see flocks of hundreds of Brent Goose feeding in the fields and flying over the salt marshes.

They are one of the south coast’s magnificent spectacles, especially as they fly overhead giving their excited gurgling grunt calls. Unless you want to look like a snowman be sure to wear a wide-brimmed hat!

But I’d only seen these birds twice in Surrey, a trio some years ago near Frimley and two more in early October 2015 heading south just after sunrise over Leith Hill.

Roll the clock forward to one early evening in October last year and I was settling down for my regular ‘sky watching’ session in the garden. 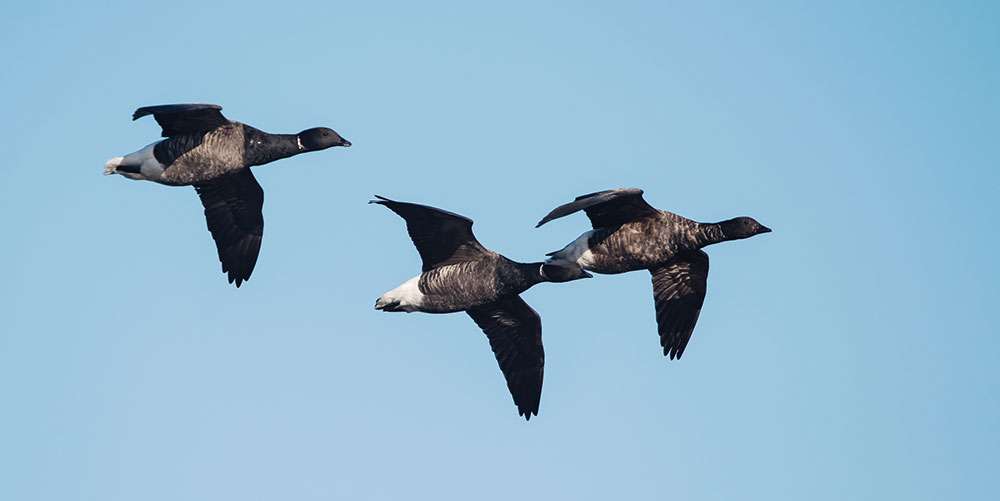 ‘Sky watching’ is only for the dedicated and is an increasing branch of birding for those of us unable to sea watch due to our inland location.

What’s going to fly over? Well, you don’t know unless you look. And that’s part of the fun. There could be something unexpected. Usually there isn’t. Mostly it is the usual village suspects, the
common birds, but just occasionally sky watching pays off with an exciting reward.

This particular late afternoon was the end of a rather windy day of south easterlies which had seemingly persuaded most southerly migrating birds to halt their journeys. I saw the usual aeroplanes from Gatwick and Heathrow milling around.

Magpies called, a Great Spotted Woodpecker drilled an oak branch above me, three species of Tit were around the feeder, and House Sparrows were assembling in the bushes for an evening natter.

And then suddenly to my left, emerging from behind the roof of a neighbour’s house, were a flock of small geese, about the size of Mallards but with longer wings.

They were only about 100 feet up at most and from their small size, black heads, necks and bellies – plus other features – I immediately recognised them as Brents! The charcoal colour of the Brent Goose gave it its name. ‘Brent’ comes from a Norse word called brand, meaning burnt. A couple gave a characteristic grunting and clucking-type call.

I was awestruck as this was only the second ever Cranleigh area record*. I counted 14 in all and from the way they were flying they looked exhausted after spending the whole day heading into the wind. Around the coast they normally fly strongly but this flock was in a loose V shape and appeared dishevelled and ready to put down for the night. 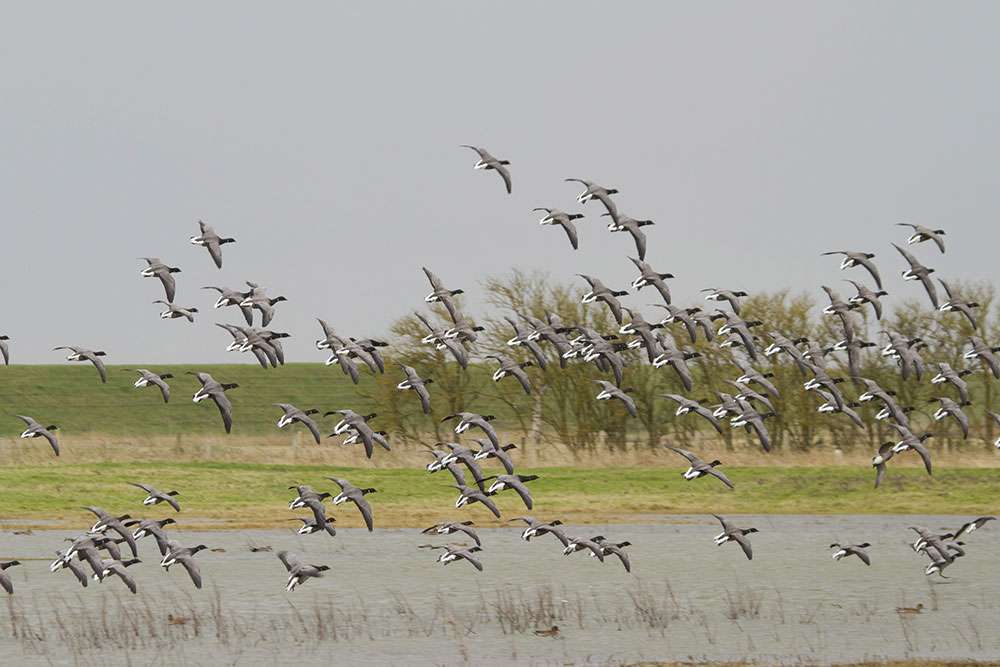 No doubt they included a family party. The young remain close to their parents during their first autumn and winter and they feed and travel with them within the flock.

What also hit me was thinking of where this group had flown from. They are the most northerly breeding goose so probably it was hundreds of miles from within the Arctic Circle tundra in Siberia.

Hopefully they had thrived well due to a bumper lemming harvest. For if this hamster-like rodent has a bad breeding season then the Brent Goose chicks can get wiped out by Arctic Foxes who put them on their menu instead.

And now they were over mine and many other Surrey folk’s gardens! What a privilege. In only a few seconds they had vanished over the trees towards the setting sun and were lost to view although some continued to call.

We had been graced with just a few magic seconds of their presence during lives which will see them clock up more miles than the average Surrey BMW. Later next month Brent Geese will begin heading back on their long journeys north.

You could wait years to see them flying over your home. Take time out to see them down the coast before they go.

*The only previous recorded Brent Goose was reportedly shot on an unspecified date in the 19th century in the Whipley Manor Farm area near Grafham. It was ‘presented to the Surrey Natural History Society ‘according to John Bucknill’s The Birds of Surrey (RH Porter 1900) and I was informed it was given by ‘a Mr Eager’, who owned the farm (per the late Major David Elliott).