The Blue Tits’ alarm calls earlier this Spring signalled a likely raptor was approaching and as I looked up to see what it would be a magnificent Peregrine Falcon powered south east against the grey sky.

It was a particularly memorable moment as this was the 100th species I have seen or heard in, or from, my house and garden.

And it reminded me of a close encounter I had with this quickest creature on the planet which has been clocked even faster than the new 200+mph Surrey-bred muscle car, the TVR Griffith.

There I was at my desk on the 13th floor of a high-rise block in Sutton when white blobs started raining down outside the window. As it was only the 2nd of November I doubted it was snow.

I soon identified another batch of falling ‘flakes’. Feral Pigeon feathers. That pointed to only one thing. Peregrine! I raced for the lift and was soon running across the railway station car park so I could look back above my office to confirm my suspicions.

And there he was. A Peregrine on a top ledge above the 19th floor of the Reed building, plucking its prey and enjoying mid-day lunch.

I had spotted him a few days earlier, flying around the building, but imagined he was just a day visitor. That was back in 2007. The species had 40 years earlier begun its recovery from near extinction, due to pesticide poisoning and persecution, and was already breeding in our county by then.

I was eager to help it do so again. By the afternoon I’d secured permission to climb gingerly onto the flat roof 200ft above the high street to investigate where a nest box might be suitably located for the next season.

This bird had clearly been around for some time because the shingle was littered with an array of feathers, including its own, Moorhen and Great-spotted Woodpecker. On an anti-pigeon roosting wire, stretching around the four sides of the top of the building, was a green plastic ring with some white numbering. I took little notice of this at that point, imagining it was a ring used to hold the wire coils together before they were unwound.

But after ‘doing a Google’ to try and identify if the falcon’s feathers were from an adult or juvenile bird I arrived at a website recording the progress of a breeding pair at Sussex Heights in Brighton. And I was amazed to see pictures of young Peregrines with rings on their legs – just like the ring I’d seen on the roof wire.

Back up on the roof I got someone braver than me to hang over the edge to retrieve the rogue ring, which bore the number ‘13’. After some detective work I established it was one of three birds ringed in the coastal town the previous year. I had already named this male Sutton bird ‘Lucky’, as apparently it must have somehow escaped after catching its leg on the wire in a freak accident. 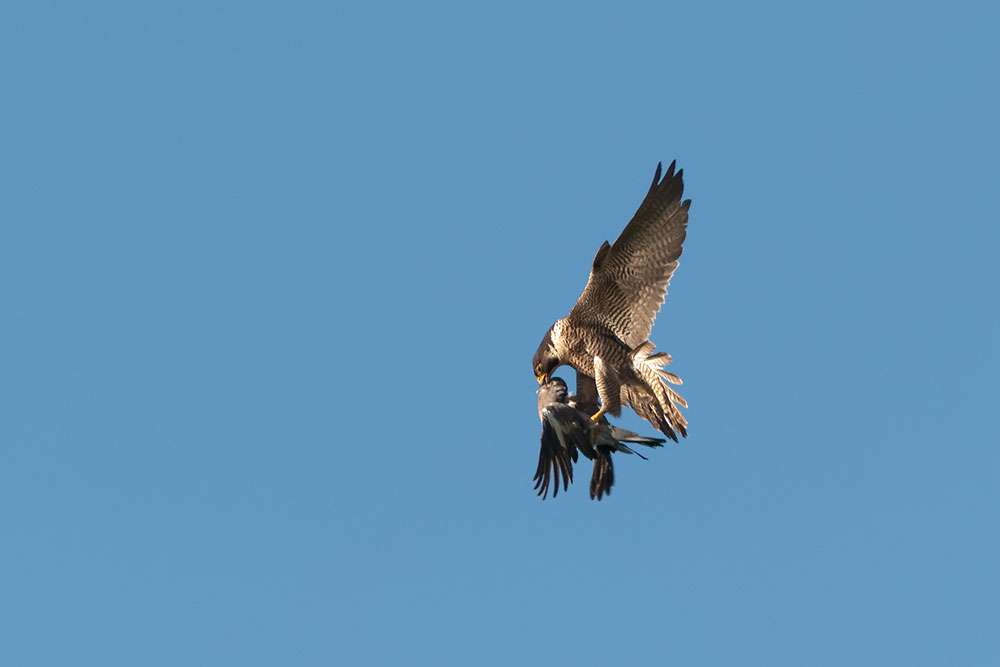 Well, it turned out that this bird had already been named ‘Lucky 13’ by a Peregrine conservation team in Brighton. Number 13’s siblings, 11 and 12, perished and he then survived a further escapade. He got blown off the roof before he could properly fly. But he was rescued from the street and taken back to the nesting scrape, via the residents’ lift.

Over the next few weeks I saw him regularly and was delighted when he attracted a mate. But I was to miss out on subsequent developments. ‘Peregrine’ means ‘traveller’ or ‘wanderer’ but soon it was me and my colleagues who were the ones having to move on.

We were all made redundant and I had to leave it to others to take up the story. I’m pleased to say their efforts paid off and have helped Peregrines breed regularly at this site in subsequent years.

And although I’ve only once had a Peregrine fly past my subsequent office window, the number 13 ring still hangs above my desk as a reminder of a strong but graceful friend and a modern miracle of survival.

Now see for yourself!

With the growth in Peregrine numbers their natural nesting sites on crags and cliffs have been supplemented by high rise blocks, skyscrapers, cathedrals and churches. Locally they are increasingly seen but remain rare.

The move to the towns has seen them change hunting strategy. They use the neon lights to pinpoint and pursue passing night migrants, many of them scarce visitors themselves.

Pairs now breed in various parts of Surrey and for anyone wishing to see Peregrines locally, rather than wait for Cranleigh’s first tower block development, I recommend a short trip north to Woking town centre.

There they have been successfully raising young on Export House since 2016. I’ve regularly seen them as I’ve passed by on the train.

This year the first egg was laid on 17th March and by the 26th there were five. All had hatched by 30th April. You might think they would be safe up there away from humans. But there are other enemies.

One fell victim to the severe cold soon afterwards and the birds have had hassle from a third adult Peregrine visiting the box to steal the chicks’ food.

Surrey Bird Club ran a stand last month in Woking Town Centre with telescopes for people who want to view these birds. Further opportunities will be on 9th and 16th June, by which time the remaining juveniles may be viewable outside the box as they take their first flights.

Check the website www.wokingperegrines.com before you go. They are viewable for incredible close-ups via four cameras. As I write, the female has just popped into the nesting box to feed the chicks and they are cheeping like crazy to ensure they get their share. I hope they make it.

Back Joy of Cranleigh – What was happening in Cranleigh in June 1918?
Next Up-cycling Sunshine!
Related Articles
1 Comment