Birding brings elation when you see the unexpected but inevitably it comes with frustrations too when you miss out (or ‘dip’) completely.

Last winter a really rare visitor to Britain, a Blue Rock Thrush, spent many weeks entertaining people from far and wide as it swapped its usual European mountain habitat to flit around the roofs of homes in a small housing estate in Stow-on-the-Wold.

It regularly came to feed at a bird table and was fairly tame – sparking much speculation as to whether this male bird was truly wild or perhaps, perish the thought, an escape from captivity.

But the doubters – and everyone else – were stunned at what happened next. It eventually departed on April 4th and two days later, as amazing as it may seem, the very same individual was relocated and identified ‘refuelling’ for a few hours at Beachy Head. Possibly it was migrating back to Switzerland after a warm winter break. Wild it was, then.

Draw a line between Stow-on-the-Wold and Beachy Head and guess where it would have flown over? Cranleigh! If anyone had firmly identified it here then they would have found a first for Surrey.

Now, I could live with missing it here as I did see the bird in question with my mate Matt Phelps when it was showing well in Gloucestershire at Christmas. But what was harder to take was when I suffered another Cranleigh ‘dip’ – in fact a ‘double dip’ a month later.

Early on May 2nd Matt lived up to his Twitter handle (@mostlyscarce) by observing two Surrey rarities flying south over his Chilworth garden. A pair of Cranes! He quickly alerted me, kindly without making any puns about my pen name, and added: “May yet turn and head your way – you never know!”

I looked so intently and hopefully out of the window at the grey sky that morning. But it was in vain. I was disappointed but that was nothing like how gutted I felt come the evening when I heard that 25 minutes after Matt’s sighting this pair of birdies were clocked flying south over Slinfold Golf and Country Club. 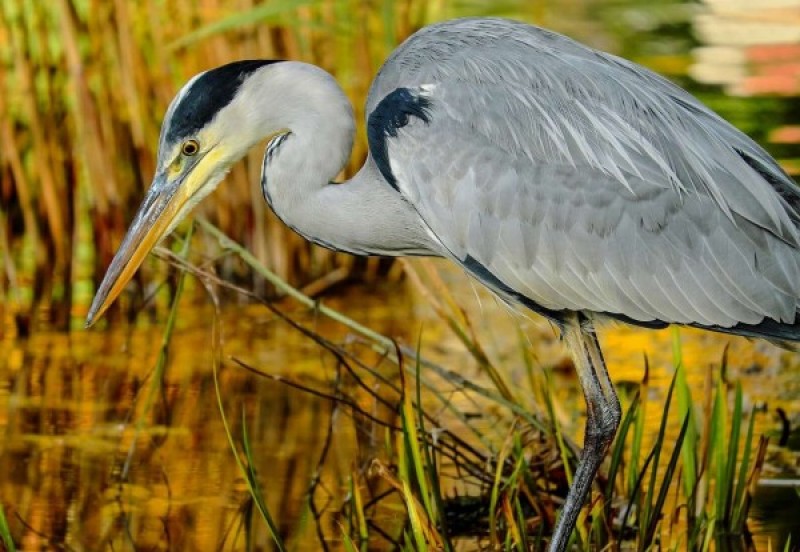 They were surely the same birds! And if you draw an imaginary line between the two sightings – yes you guessed it – then they’d have gone right over the village, in fact right over my house! Ouch!

As I failed to live up to my ‘Crane Spotter’ name the joke was on me. I consoled myself by remembering I had seen Crane in Surrey and would yet hope to connect with one locally now that this species is benefitting from British conservation efforts and enjoying more successful breeding attempts. Its correct title is Common Crane – but that is yet to be.

We take a big interest in this bird in Britain’s biggest village because we are supposedly named after it from ancient times. But which species are we really talking about? The contenders are Common Crane Grus grus and the Grey Heron Ardea cinerea. Now the former died out almost entirely in Britain many decades ago while the latter is a local resident breeder.

However, confusion between the two is rife and we just haven’t got our act together after all these years. Both species are depicted in Cranleigh on modern street furniture, murals and school logos, and in some cases it is hard to identify what they are meant to be.

The one outside Cranleigh Village Hall looks more like a White Stork. The best Common Crane depiction I’ve seen, so far, is Malcolm Skipp’s beautiful 2012 mosaic at the Cranleigh Medical Practice.

Country folk often referred to the Grey Heron as a Crane and some still do. The Common Crane is said to have been a resident of local marshland in olden times yet there are strangely no confirmed records of its existence in Cranleigh. Birds in Surrey, edited by Donald Parr (1970), accepted only two records for the species in the whole county.

Grey Herons, we know, were hunted by Royals and gentry in bygone times and eaten as a delicacy. King William, it has been recorded, once complained of a “half cooked Crane” during a hunting visit to Cranleigh’s Baynards estate – where the Grey Heron remains a regular sight. Did he mean the latter?

Well, maybe not. Cranes were a delicacy too! There are records of both species being featured on old menus – and writers even draw distinctions between their flavours.

The true origins of Cranleigh’s name remain a mys­tery. In discussion in 1999 with local historian Chris Budgen, author of our first full history book Cran­leigh – A History of Wealden Settlement (1998), he reported to me there was no evidence to support either theory.

Like him, however, I suspect the name most likely derives from the Common Crane Grus grus. It was considered long gone at the turn of the last century. But it’s now making a comeback thanks to conser­vation work and, who knows, it could be flying and honking over your own house before too long.