Cranleigh Film Club is showing A Man Called Ove (15) on Thursday 25 April starting at 7.30pm; doors open at 7.00pm. As usual our film will be shown in the Band Room, GU6 8AF, and there is ample parking in the adjacent Village Way car park. Refreshments are available. 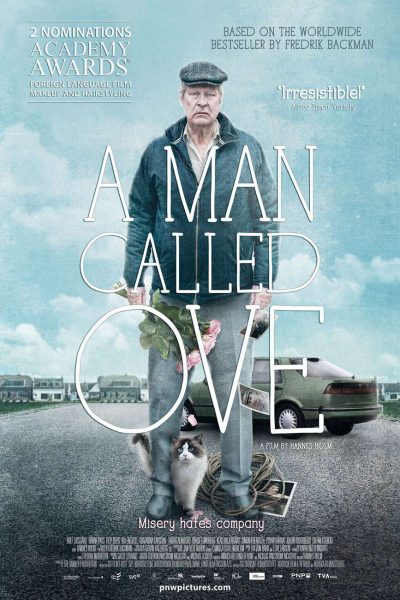 “A strong contender for feel-good film of the year,” Empire. We show in April “a gem, a satisfying and heart-warming tale of unreliable first impressions” – a comedy-drama from Sweden. An isolated, irascible man, a ‘nit-picking obstructionist’ (Guardian), missing his wife whom he loved deeply and who has given up on life, develops an unlikely friendship with his boisterous but good-natured new Iranian neighbours. “One thing is certain: whatever we do in life, no-one gets out alive,” he says in the film. It’s “a beautiful movie I can warmly recommend; it will make you laugh and cry.” It had 14 wins at awards ceremonies, plus 24 nominations.

The Guardian called it “a moving and funny tale of a suicidal Swedish mechanic being helped by his pregnant Iranian neighbour.” It’s hard to resist the joy of the film, the unbridled heart, and Ove’s hilarious hatred for all the world’s idiots.

Well-crafted and satisfying, nicely balanced between comedy and pathos. Lassgård, the lead, gives one of the year’s best performances: rich, complex, funny and moving.