Cranleigh Film Club is showing Lady Macbeth (15) on Thursday 31 January starting at 7.30pm; doors open at 7.00pm. As usual our film will be shown in the Band Room, GU6 8AF, and there is ample parking in the adjacent Village Way car park. Refreshments are available. 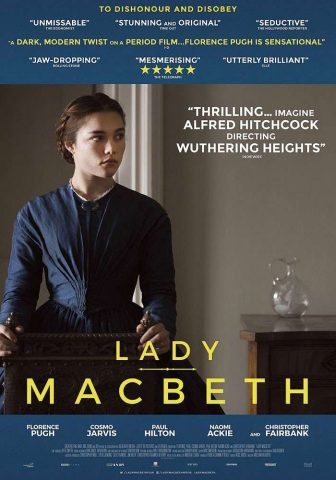 A strong noir from Cranleigh Film Club to warm you up in January!

Directed by William Oldroyd, it stars Florence Pugh (‘sphinx and minx’ – Guardian) as Katherine, a woman unhappily married to Alexander (Paul Hilton). Refusing to be broken in spirit, she frees herself from the shackles of patriarchy in the most drastic way, starting an affair with an estate worker, Sebastian (Cosmo Jarvis). When her father-in-law finds out she takes decisive action. The situation continues to deteriorate, “all driven by the sensuality and rage of Pugh’s performance,” – Guardian.

Oldroyd is a theatre and opera director (Almeida, Barbican, Young Vic). This is his first feature film and it won 10 awards, including Best Director, Best Actress for Florence Pugh, and Best Cinematography, in the Independent Film Awards. Oldroyd said of the story: “it’s a cracking read. We’re used to so much literature of the Victorian period where women suffer in silence or run away. Katherine full-bloodedly takes her destiny in both hands.”

Tim Robey wrote in the Telegraph: “Lady Chatterley gone ballistic – a British period thriller with a tone of mounting fatalism: a star-making mesmerising turn on one side of the camera, and one hell of a directing debut on the other. A cold oven which eventually blows a gasket. What’s fascinating about Pugh’s Katherine is how she both fights the power of her father-in-law (Christopher Fairbank), but also bends it to her will. She’s not a character you’ll forget, and Oldroyd’s portrait, less watercolour than study in soot, leaves you chilled to the marrow.” And Peter Bradshaw in the Guardian, “the presence of Anna the maid (black) (Naomi Ackie) and Sebastian (mixed race), and their shifting personal loyalties, create crosscurrents of power with the white ruling class to which Katherine’s allegiance is strained. The house itself is a potent character; we see only its prison-like interior, a place without comfort where movement is audible hence can be monitored. Katherine has cunning and a talent for survival.”

Back What is the true value of a traditional High Street Estate Agent? – Tim Crowe
Next Surrey Hills Rehab is expanding for 2019!
Related Articles
No Comments