Cranleigh Film Club is showing Paradise Now (PG) on Thursday 27 JUNE starting at 7.30pm; doors open at 7.00pm. Our film will be shown in the Band Room, GU6 8AF, and there is ample parking in the adjacent Village Way car park. Refreshments are available. 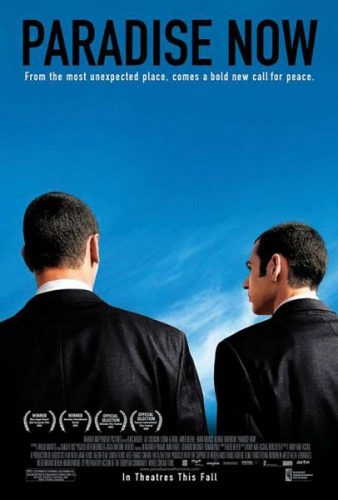 This month we have a tense, thoughtful, personal drama for you, where the tension racks up as it progresses. Two Palestinian youths from the West Bank are 48 hours away from becoming the latest suicide bombers. Volunteering to perform a suicide mission, they feel it would give meaning to their lives – though Said harbours doubts because of his girlfriend. During their mission they get separated. That’s the bones of the plot, but the film concentrates on presenting Said and Khaled as people who have reached a decision and now have to carry it out. They’re not fanatics; their organisation provides training, encouragement, shaves, suits, and a ceremonial dinner. On his video, Said expresses the Palestinian position, angry that the Israelis have stolen the victim-hood he believes belongs his own people. The martyrs’ heroism comes with everyday details: during a video a bomber interrupts his sermon with a shopping list for his mother. Then there is Suha; she and Said are falling in love. A Palestinian born in France, daughter of a revered leader, Suha has status. Influenced by the West’s scepticism, she questions terrorist acts on both theological and practical grounds: Islam forbids suicide; does a suicide bomber qualify as a martyr? She thinks the bombings create victims and inspire retaliation in a cycle of violence.

The New Statesman said: “its intensity gives Paradise Now a real sense of time and place, from the streets of Nablus to the beaches of Tel Aviv. Abu-Assad, the director, shows the men as they spend their last night with their families, eat dinner, sleep restlessly. Said sneaks off to meet Suha. The next day you see Khaled and Said being prepared by their handlers, a ritual that includes prayer, food, clothing, the making of their “martyr” videos and finally, the strapping on of the belt. Once the mission is under way, the film turns up the tension; every scene matters.” Paradise Now gained 11 Award wins and 14 nominations in total.