Cranleigh Film Club is showing Sunset Song (15) on Friday 8 March starting at 7.30pm; doors open at 7.00pm. As usual our film will be shown in the Band Room, GU6 8AF, and there is ample parking in the adjacent Village Way car park. Refreshments are available. 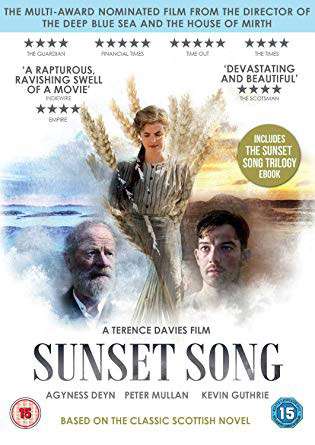 Written by the director, Terence Davies, from Lewis Gibbon’s novel set in the 1910s, Cranleigh Film Club’s offer for March tells the life of Chris (played by Agyness Deyn), an inquisitive and intelligent girl, one of the numerous children of a tyrannical Aberdeenshire farmer struggling to survive. She dreams of being a teacher. The years bring hope and disillusion, mirth and sorrow, dreams and toil, sweetness and violence, love and hate, peace and war. Finally they bring the dignity of a new Chris, a woman who has lived several lives. As she says, “nothing endures but the land.”

Sunset Song is Scotland’s favourite novel, according to a 2016 BBC poll. James Naughtie, who grew up in the area, wrote about it in the Guardian: “Gibbon portrays the cataclysmic impact of the war on a generation and their expectations. Chris loses her men, she has to cope with rumours of cowardice, and she sees the territory around her transformed. Life was hard. The story makes a natural drama because Chris is one of the great women of 20th-century fiction, but also because the setting is so alluring.”

Peter Bradshaw, wrote in the Guardian of “this deeply satisfying tale of a rural community before the first world war. It’s a story that counterpoints the passing joys of youth and love (‘lovely things that didn’t endure; the lovelier for that’) with that unending glorious earth. A sad, sombre drama.”

Mark Kermode, Observer: “A lyrical triumph, the director at the height of his powers. Song, ringing out through the rustle of wind and bird and harvest, threatens to transform this drama into a musical. What sings clearest, however, is the ravishing cinematography that takes us from the confines of candlelit interiors through glowing fields of gold and green and up into skies of blue, grey and white. Through it all, the land, like this exceptional director, endures.”

Please note it’s on a Friday, not the usual Thursday.