Cranleigh Film Club is showing Inversion (PG) on Thursday 30 May starting at 7.30pm; doors open at 7.00pm. Our film will be shown in the Band Room, GU6 8AF, and there is ample parking in the adjacent Village Way car park. Refreshments are available. 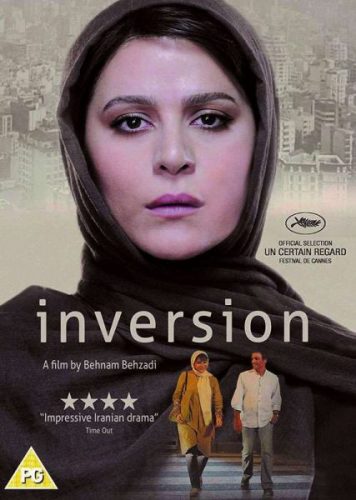 Inversion (PG)
A strong Iranian feel this month. Behnam Behzadi’s film, Inversion, centres on Niloofar, who has a successful tailoring business. The youngest sibling, but the only one unmarried and childless, she is tentatively resuming a friendship with a man whose previous courtship of her had been cut short by family circumstances. When her grandmother’s illness worsens in the Tehran smog her self-interested family forces her to give up her independent business life and move to the country to care for her grandmother. Even her suitor turns out to have a secret which contributes to her oppression. Time Out said, “It’s an impressive Iranian drama, delving into the labyrinth of Iranian social mores and the ways in which women of different generations mark out their own emotional space.”

Behzadi loved the cinema from childhood but there were few films after the revolution. He studied cinema and started in the theatre and photography whilst directing shorts. He has made over 20 films, mostly shorts, but this, his third feature, is his first using professional actors. He says he was inspired to make the film after walking past a girl on a Tehran street who was wearing a mask against the smog, and sobbing; did she wear the mask against the smog, or to protect herself from the reprimands of society?

“What sets it apart is its plucky heroine coupled with Behzadi’s ability to capture the strength of his female characters. A simple film, yet the character-based storytelling is nevertheless than compelling. Niloofar’s struggle is brought to life through the enchanting wide eyes of Saba, her young niece, who, with her more progressive attitude, is forced to watch as men trample all over her aunt’s freedom,” Little White Lies. “Introducing the film at Cannes, Behzadi explained the status of an independent filmmaker in Iran, “you feel you are alone all the time…you have nothing except your aloneness.” Having the strength to be alone is at the heart of Inversion. Behzadi’s storytelling is conventional, but the film’s appeal lies in revealing the web of family obligation and filial responsibility,” Roger Ebert.