Cranleigh Film Club is showing Graduation (15) on Thursday 29 November starting at 7.30pm; doors open at 7.00pm. As usual our film will be shown in the Band Room, GU6 8AF, and there is ample parking in the adjacent Village Way car park. 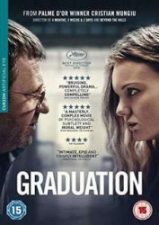 Graduation (15)
A doctor’s daughter in the Romanian town of Cluj is assaulted just before an important exam to determine whether she has a place at a British university. A corrupt official suggests to the willing father that the exam result can be fixed in return for a queue-jumping operation on a politician. To him the ends would justify the means, but his daughter resists the graft. A film about choice and compromise, the small questions that mushroom into crises; “misfortunes occur, unpredictably,” says one of the characters; the daughter isn’t certain she wants to leave her boyfriend and go to Britain to study. “Deceptively simple on its face, Graduation is full of such bluntly effective scenes, which Mungiu films in wide, generous shots, the better to accommodate his characters, their environments and their unspoken history,” Washington Post.

The Guardian said: “an intricate, deeply intelligent film. A masterly movie of psychological subtlety and moral weight about the choices people make as they claw their way. What about the innocent children for whose sake this alternative ethical system was created? Superb performances. A jewel in this exceptionally good Cannes lineup.” Observer: “superbly acted, edited and photographed, this is Romanian cinema at its best.” Roger Ebert: “one man’s moral choices – a masterpiece. Romania’s cinematic upsurge is the principal national film movement of this century.”

Membership costs £30 per year, covering all 12 films. To join please email your details to [email protected] btinternet.com. We make a £5 charge for guests at each film. Do come along and enjoy the atmosphere!

Back Remember a Recipe!
Next Cranleigh Fish – Celebrating 30 Successful years on the High Street!
Related Articles
No Comments