Films in Cranleigh and Surrounding Areas

Spring, Summer, Autumn, Winter . . . Spring Is a South Korean film from 2003,an exquisite meditation on the trials and burdens of life. A Buddhist hermitage has a monk and a boy contemplating beside a beautiful lake. The boy grows up, leaves, comes back, the monk grows old, and the cycle of life repeats.

Certain Women is directed by Kelly Reichardt whose Meek’s Cutoff was shown by the club in 2011. Michelle Williams stars, as an ambitions, frustrated woman, Laura Dern as a lawyer in an affair with a married man whilst defending a construction worker. A third woman is a Native American, acted brilliantly by newcomer Lily Gladstone, as a farm hand enrolled in night school who develops feelings for her teacher, played by Kristen Stewart. Separate stories set in Montana with little music and great subtlety- every look is meaningful. 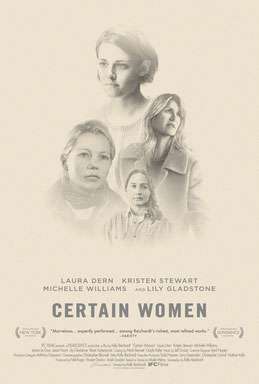 Goodbye Christopher Robin is to be shown at two local venues, at Cranleigh Arts Centre on Saturday 3 March (8.00pm) and Shere Village Cinema on 18 March. A film which resonates with the British public, it mixes fact and fantasy, enviable family life in leafy Sussex with the effect of world wars on father and son. AA Milne wrote timeless classic tales from stories about his son and his toys. The film respects the special place Winnie –the –Pooh holds, and conveys the celebratory status which resulted from publication and its devastating effect on the son.

The Death of Stalin is also being shown at both Shere (1 March) and Cranleigh Arts Centre (31 March). Armando Iannucci is famous for caustic, foul mouthed satires of incompetent civil servants and politicians. Taking on the subject of the chaotic jockeying for positions when the great tyrant died is more ambitious. The cast is outstanding: Steve Buscemi (Krushchev), Jeffrey Tambor (Malenkov),Michael Palin(Molotov), Jason Isaacs (Zhukov), Simon Russell Beale (Beria), Andrea Riseborough (Svetlana, Stalin’s daughter). The film is very funny and must not be taken seriously, but the Russians have banned it – Stalin is back as a giant of their history.

In Between is showing at Cranleigh Arts Centre on Thursday 8 March. A debut feature from Maysaloum Hamoud, It is an inspiring treat of a story about three Palestinian women living in Tel Aviv, each of whom is fighting her own battle for independence and fulfilment. As the title indicates, these women are caught between socio political and religious extremes. Laila is a rule breaking lawyer in a leather jacket and lives with her aspiring DJ lesbian friend. They take into their flat a puritanical young women due to be married to a conservative Muslim. We receive insight into real people’s lives outside the permanent issues about the West Bank and Gaza.

The Party will be screened at Cranleigh Arts Centre on Friday 23 March. Sally Potter’s sharp, funny play has been filmed, under her direction, with a stellar cast including Kristin Scott Thomas, Timothy Spall, Cillian Murphy, Emily Mortimer, Bruno Ganz, Patricia Clarkson. Kristin Scott Thomas is the shadow cabinet member hosting the party with her academic husband played by Timothy Spall. She has been promoted and could be heading to the top The other guests help to bring repressed feelings, resentments and secrets to the surface, which parties like this must have in plays.

Back Book Review – Frank Penny and the Mystery of Ludlow Hums – Jeremy Elson
Next Time marches on . . . but what about anti-ageing?
Related Articles
No Comments