Home » Education » Joy of Cranleigh – What was happening in Cranleigh in August 1918?
0

Joy of Cranleigh – What was happening in Cranleigh in August 1918?

Memories of the fun at Oakland’s: recovering soldiers put on a Pierrot show (with grateful thanks to Mike Rackley)

The Oakland’s Red Cross Auxiliary Hospital in Knowle Lane closed this month. Since January 1915, when the hospital opened, a total of 617 soldiers had been cared for, with no death or infectious illness, and not ‘a single case of indiscipline among the men’. Thirty beds had been continuously occupied, and this had risen to 33 since the German Spring Offensive of March 1918. The average stay of each patient was 35 days. The commandant, Mrs Clementina Rowcliffe, in the final report and accounts, wrote with the ‘keenest regret’ at parting from the team who had worked so devotedly and with a ‘happy spirit of co-operation and absolute lack of petty jealousies’. The hospital was dismantled: some equipment was returned to its owners, articles fit for hospital use only were given to the Cranleigh Village Hospital and others, and the remaining furniture was sold. The building was then handed back to its owners, Sir George and Lady Bonham of Knowle, who had generously lent it to the Surrey Branch of the Red Cross. 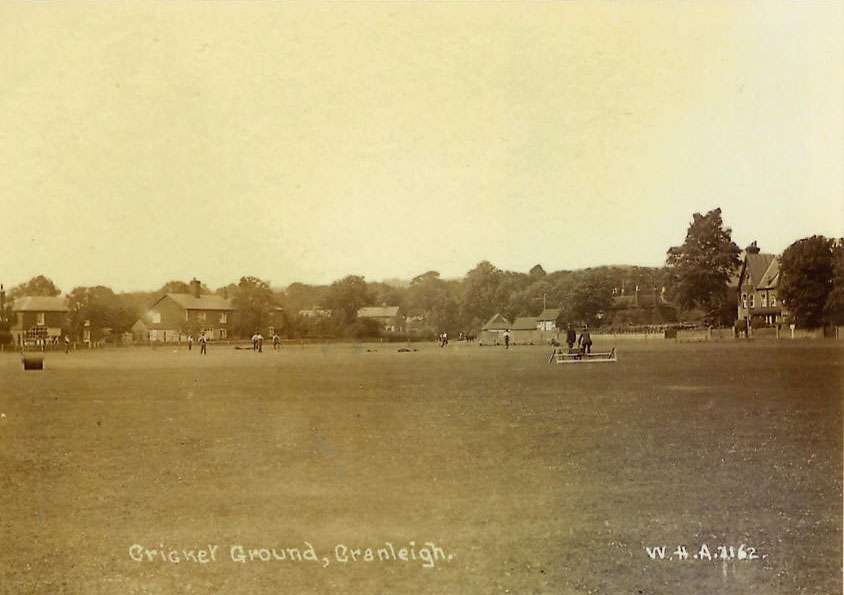 No cricket was played during the war on Cranleigh’s fine cricket ground, except by Cranleigh School. This was a cricket-loving region, as evidenced by the presence of cricket grounds in even the smallest village. Nationally, there was no 1st-class cricket either. Wisden’s annual Cricketers’ Almanack shrank in size, without its normal analyses of the county clubs’ previous season, and national statistics. Its regular feature on ‘cricketers of the year’ had been suspended. However, in 1918 somebody at Wisden’s had the bright idea of publishing its choice of five outstanding schoolboy cricketers.  Among these five was a boy of Cranleigh School, Harry Calder, who had taken a remarkable number of wickets in the 1917 season. 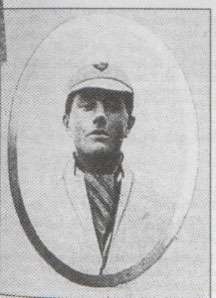 Harry Calder’s portrait in Wisden 1918 as given in Wikipedia (my thanks to Peter D. Marks for alerting me to this)

Calder had come to Cranleigh from South Africa in 1914 and played in the school 1st XI for five seasons, the last three as captain. He is variously described as an off-spinner or a fast bowler who bowled off a short run-up. After the war, Calder played one undistinguished match for Surrey 2nd XI against Staffordshire, and then returned to South Africa, where he took up golf and tennis instead of cricket.  He thus has the distinction of being the only Wisden Cricketer of the Year never to have played first-class cricket!

Attempts to cope with the shortage of food dominated the news in the Surrey Advertiser. Reports of the harvest in the county were encouraging: ‘motor reapers are at work in many places’. Wheat was a bumper crop, oats varied, there was less hay, ‘so much land having been broken up’, barley was average, but potatoes were promising. A demonstration of potato bread-making was held in Guildford. Here in Cranleigh, the Pig Club Committee planned to buy a boar for £10 10s. 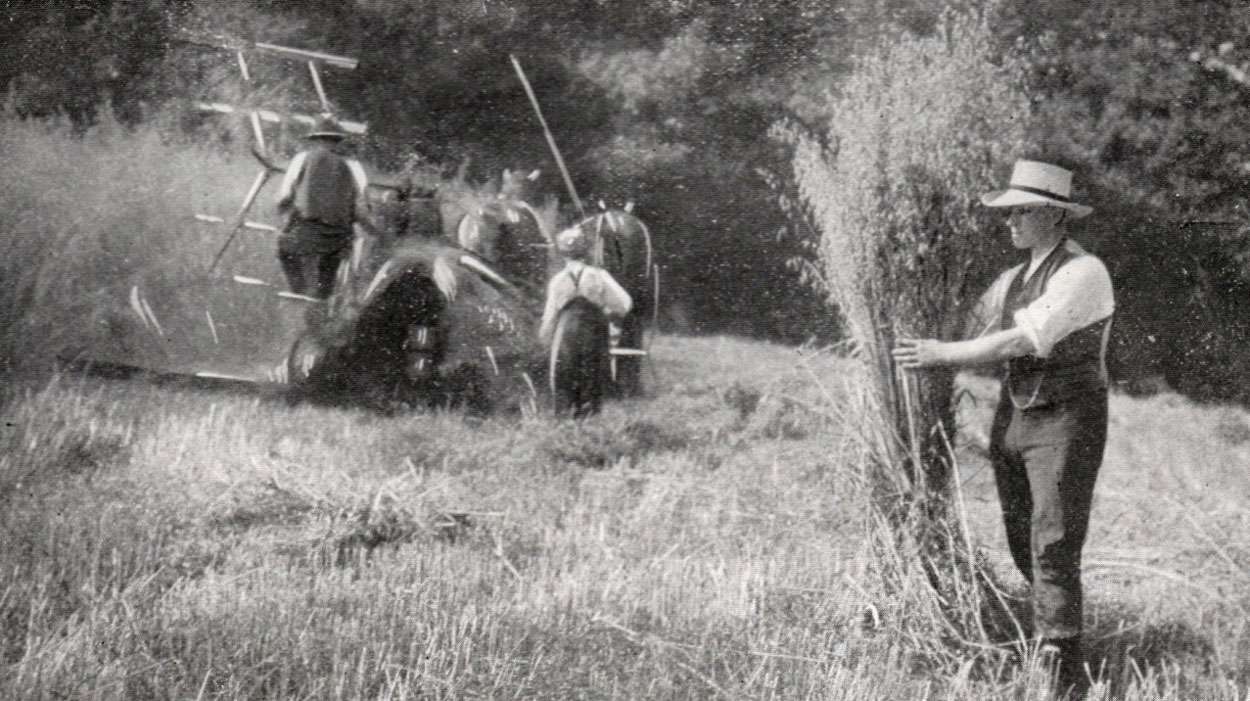 A fine crop of oats on one of the farms of A.B. Johnston of New Park

Meanwhile, poor Joe Cheesman, a prisoner-of-war in Belgian Flanders since April, had still not heard from his parents in Cranleigh. Nor did he have any idea whether the letters he wrote home were getting through. His mother wrote frequently and at length, but her letters were always returned, as having an inadequate address. At one point, she reckoned that she had had a dozen letters returned. She kept them all. 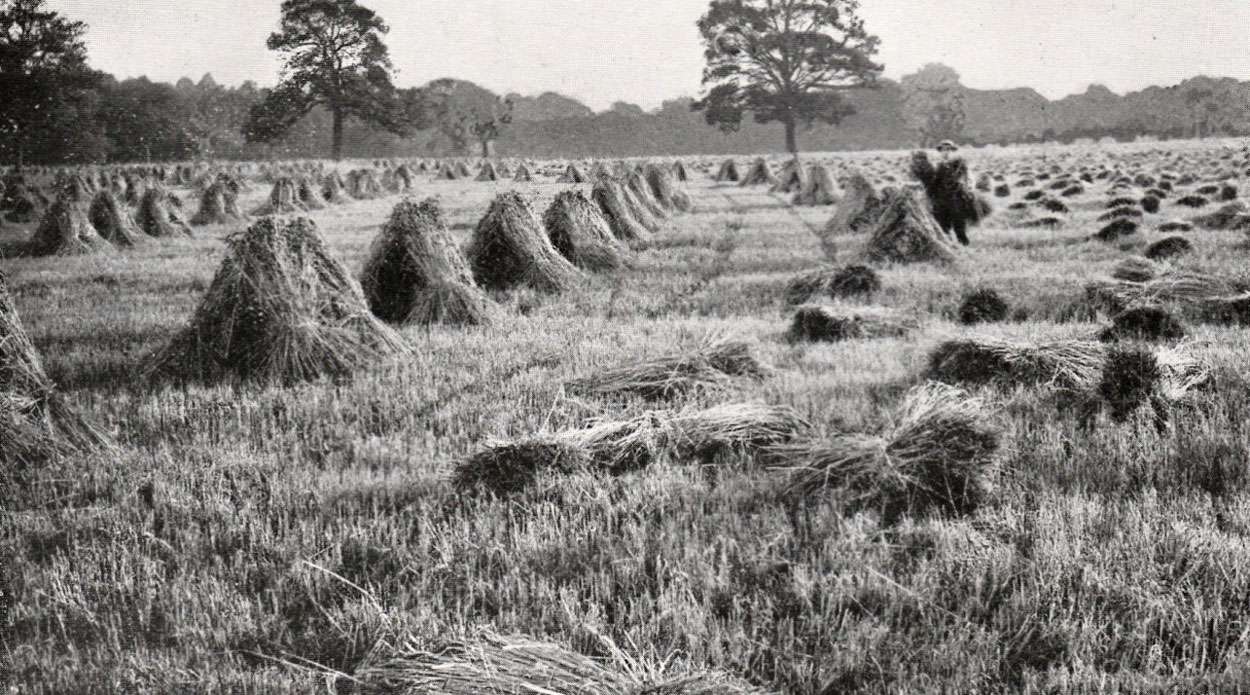 Harvesting in Cranleigh (A.B. Johnston, The Battle of the Atlantic (1941))

Unfortunately, Joe had developed a poisoned foot, and was admitted into the prison camp hospital. On August 9th he wrote home: ‘I am out of the hospital now and am very glad of it too. The hospital is an ordinary hut, the same as we live in, but being nearly empty and always quiet, the rats and mice have got very bold, and they were fond of climbing up my bed and dancing on the pillow, which you can imagine I didn’t like by any means. Besides that, they were fond of clearing up your bread and I can tell you we don’t get enough to feed mice.’

The Cranleigh History Society is not meeting in August. 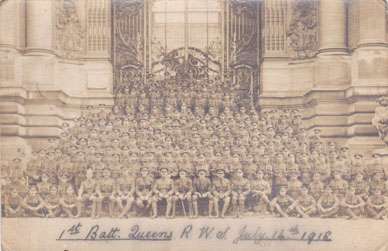 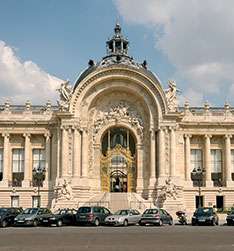 1st Battalion The Queen’s: where are they?

Mystery photo of 1st Queen’s in July issue. This photo of the 1st Battalion, The Queen’s, assembled in front of a very grand building on 14 July 1918, has now been authoritatively explained. The Surrey Infantry Museum says that a contingent from The Queen’s joined other contingents to form a composite battalion representing the British Army in France at the ‘Demonstration’ in Paris on 14th July (French National Day). Imogen Middleton, Project Officer of ‘Surrey in the Great War’, has identified the building as the golden gates at Le Petit Palais (just off the Champs Elysées). Grateful thanks to them all!