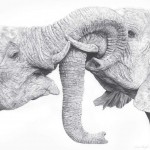 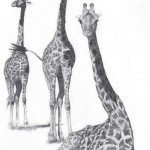 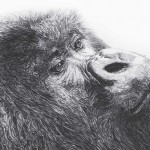 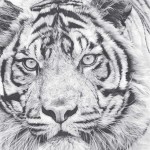 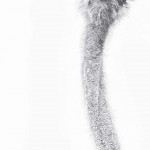 Born in 1978 and raised in Norfolk, Chris Wright now lives in Cranleigh with his wife, Rebecca, and two young boys, Patrick and Ben. A self-taught artist, Chris wanted to follow in his grandparents’ creative footsteps, and spent many childhood hours drawing Disney cartoons. Eventually, though, the countryside where he grew up became his greatest inspiration, and he developed a firm fondness for drawing animals, especially wildlife.

Chris established his artwork commercially in 2004, whilst studying for a Masters of Research in Environment & Development – a qualification that led to him working as Senior Programmes Officer, managing great ape and tiger conservation initiatives for the UN and the Born Free Foundation. Since 2012, Chris has taken on a new challenge in the form of primary education, and has been a Teacher at the Duke of Kent School for the past three years. In what spare time he can muster, however, Chris continues to draw, mostly to commission, for what has now become an international clientele.

His debut one-man show at the Barber Institute of Fine Arts in Birmingham in 2004 was a sell-out, followed by a similarly successful solo exhibition at the Cueb Gallery in London. Chris has regularly been selected to exhibit at the annual National Exhibition of Wildlife Art in Chester, he is a three times finalist in the David Shepherd Wildlife Artist of the Year awards at London’s Mall Galleries (where his work has been Highly Commended), and was awarded a Gold Citation by The Wildlife Art Society International in 2010.

Chris’ conservation work took him to many parts of Africa, Central America, Europe and Asia, where he enjoyed first-hand encounters with many of the animals that have inspired his art. Most
significant amongst them was the moment, in 1997, when he tracked mountain gorillas in Uganda. “Seeing them at such close quarters, in their own realm,” he explains, “was without doubt the most electrifying and humbling wildlife encounter I’ve been lucky enough to experience.”

Part of his commitment to the conservation of wildlife includes donating a percentage of his profits to Born Free’s project work to help keep wild animals where they belong – in
the wild. Chris’ involvement with conservation affords not only the opportunity to make a direct contribution to saving endangered species, but also keeps the stark realities of the threats facing the natural world at the forefront of his mind: “If ever I feel like I can’t be bothered to pick up a pencil, or sense that my concentration is waning mid-drawing, my wildlife experiences give me all the motivation I need to refocus, knowing that my drawings are helping in some small way.” To date, his artwork has raised over £14,000 for wildlife conservation charities.

Chris welcomes commissions and can also be booked as a speaker on conservation issues and/or wildlife art. Original drawings and limited edition prints are available at: www.cwright.co.uk, and progress on his latest drawings can be followed at www.facebook.com/ChrisWrightWildlifeArt.

Back The Joy Of Cranleigh – What Was Happening in Cranleigh in January 1916?
Next Crane Spotter – January – Waxwing lyrical
Related Articles
No Comments