The Art of Model Making – Just an idea!

In the original 1897 version of Bram Stoker’s book ‘Dracula’, we are first introduced to the Count when Jonathan Harker is invited into his castle in Transylvania. He is described as a “tall, old man, clean shaven but with a long white moustache, aquiline thin nose, arched nostrils, massive eyebrows, pointed ears, scant hair around the temples, domed forehead, white face, thin red lips, red gleaming eyes, wearing black from top to toe.”

Having re-read the book recently and thoroughly enjoyed it, I decided to try and create my own interpretation of Old Dracula especially as I have never seen an accurate version in film or TV (Please do let me know if there is one!).

“It is the fault of our science that it wants to explain it all; and if it explains not, then it says there is nothing to explain.” – Bram Stoker

FW Murnau’s fantastic Count Orlok from the 1922 film ‘Nosferatu’ comes close and Francis Ford Coppola’s wonderful 1992 Dracula has many similarities but is not quite accurate. Also, the story itself does not present Dracula as a ‘lover’ but as an Un-Dead, Un-Holy and Damned monster, who was once a Romanian warrior prince from antiquity who has lived for centuries, controlled nations, is 20 times stronger than a normal man, can move ‘panther-like,’ climbs walls like a lizard, thinks nothing of stealing a baby to snack on and then controls wolves to tear the mother apart – this truly is a terrifying and horrific character! 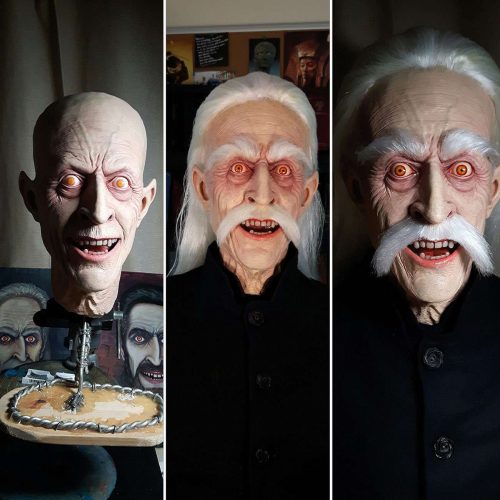 Importantly the only thing that can weaken him is daylight (it does not say it burns) and he is repelled by the Cross of Christ and the Communion Wafer.

So, this is my presentation of Old Dracula and I’m sure he is VERY pleased to meet you! – head sculpted from plasticine, painted with acrylics, painted and varnished eyes, wig hair stuck on and styled, coat made from black fabric and wadding, bookshelf made using plastazote and leather offcuts – plus a little Photoshop.

Back March 2019 – Begin the Spring Clean!
Next Adventurous Girls From Cranleigh Brave The Cold At Winter Camp
Related Articles
No Comments