Liquid sewage effluent in ‘our’ river, plus the lack of fish, have been in the local news lately. It has been good to see villagers kicking up a stink about it – especially as there are fears the water quality could get a whole lot worse.

On Cranleigh Civic Society’s website recently my heart dropped when I read the following paragraph: ‘In Cranleigh huge housing estates have been and are being approved which will knowingly increase pollution in Cranleigh Waters . . . ’

So I thought I’d take a stroll earlier this winter beside the water course to see what was about.

‘River’ doesn’t seem to be quite the right word. It’s more like a stream. And quite a stagnant looking one at that. The lack of water flow makes it look more like a narrow, winding lake.

But the overgrown edges – I’ve not seen anyone fishing there for years – have evidently been to the liking of one particular visitor. A bird that likes reedy-edged lakes, ponds and smelly old-style sewage farms.

Fitting then that it calls in the way it does. It sounds exactly like a squealing pig! When I first heard it late one afternoon the light was fading and I just caught the sound of a solitary grunt. And that was it.

I wondered momentarily if I was imagining it because, in 29 years of birdwatching in and around Cranleigh, I’d never been lucky enough to hear or see a Water Rail. There had been only seven records to my knowledge – although I have always suspected this highly secretive species is a more regular visitor than realised. But even the massively researched book Birds of Surrey makes no mention of Water Rails ever having been seen or heard here.

The last one in the village was reported as long as 10 years ago and I’ve never forgotten the frozen fingers I endured the following day when I spent a fruitless afternoon sitting quietly in the snow waiting for it to show.

Nearly three weeks after hearing that ‘grunt’ I was able to return, this time on a sunny and still winter morning. Almost immediately the bird called: ‘Eeeeek, eeeek, eeek eek!’ Yes! At last I’d found a local Water Rail! 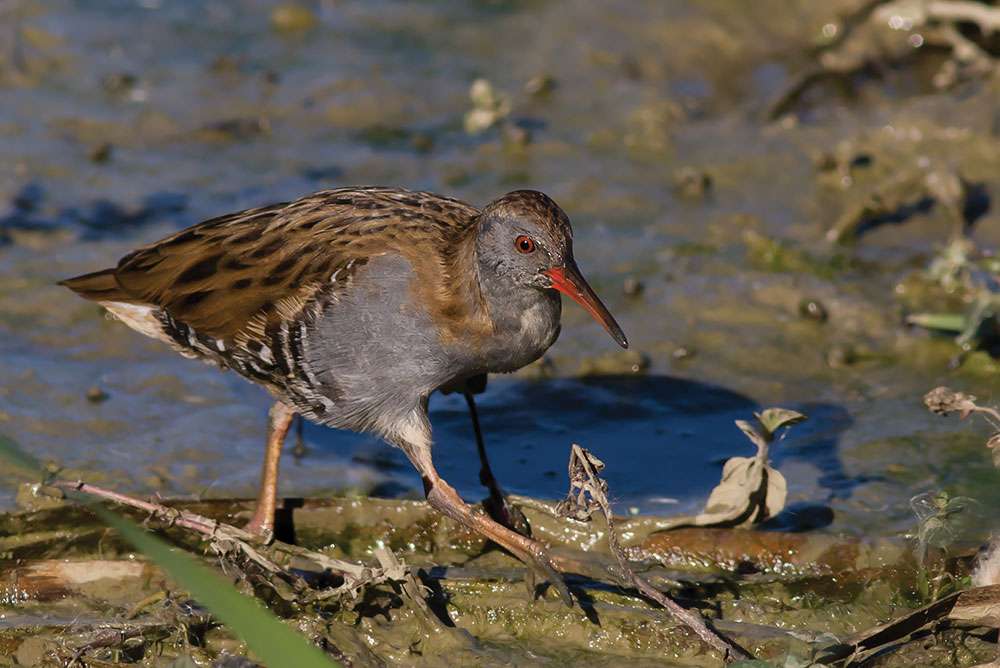 But now I needed to see it. That would be easier said than done because this species keeps low down under cover and generally only occasionally shows itself as it scurries across gaps in the reeds.
It called again, further away along the far bank this time, so I carefully edged along the path until I estimated I was in front of it and might just see it as it rounded a bend in the river and caught up with me. Twice more in the next half hour it squealed, getting nearer all the time – only now it was on my side of the water. I crossed over a bridge, ducked down in some dead weeds, and waited.

Ripples came out from the edge of the bank further downstream where something was indeed moving. I crept forward and, yes, there was a bird on the edge. But it was too big for my quarry. A Moorhen! But I figured it had its use. And now it was swimming upstream and towards me.

I followed it carefully through my ‘bins’, anticipating that it would surely agitate any Water Rail into showing itself. Bingo! Within seconds there was a movement on the bank opposite me and at last there in front of me was the elusive Water Rail of nearly three decades, crawling like a mouse under the flattened stems.

If it hadn’t been moving it would have been much harder to see because the black and white vertical stripes on its flanks provided brilliant tiger-like camouflage in the vegetation. The sides of its head and neck down to its belly were a subtle slate-blue and I was close enough to focus on its red beady eyes and long dagger-like bill, ideal for spearing prey such as a shrew or frog.

Within seconds it had disappeared from view, aided by its streaky brown upperparts that helped it apparently dissolve into the dark sedges. After another 10 minutes I gave up trying to relocate it.

But as I walked back to the car there was a loud, harsh cheeping noise coming from the far bank. Now the Water Rail was in full ‘song’. I was delighted to see it, on and off, for another five minutes as it strutted under a large patch of blackthorn. It frequently cocked its distinctive white undertail-coverts and ran across any gaps in the vegetation to lessen its chances of being ambushed by a greedy Grey Heron.

On a subsequent visit last month (January) I was pleased to relocate the bird and find it was not alone. It had at least one other ‘little porker’, squealing nearby, for company. And I later found a third bird.

They will hopefully see out the winter safely here before migrating back to breed on their likely home turf, probably somewhere on the Continent such as Germany.

Back Cranleigh Camera Club Events – February 2017
Next Joy Of Cranleigh – What was happening in Cranleigh in February 1917?
Related Articles
1 Comment