In my Crane Spotter column last April, I wrote about the irruption of the Common Crossbill into the Cranleigh area and several readers subsequently enjoyed seeing them.

Some years you get them and some years you don’t. They are never ‘common’ here. I said then it was the nearest thing we’d got to a parrot and I predicted that sightings might again be scarce in 2018. And so it proved. This year I’ve only seen one near Cranleigh – at Blackheath. But what I, and no other birder predicted, was that something even better would turn up. The Common Crossbill’s big brother. Parrot Crossbill. Chunkier than the smaller finch fella, this beefy rarity to England looks like a heavyweight boxer by comparison.

He has a fuller tum, a thicker ‘bull’ neck, and fiercer expression. And he tackles much bigger meals. The Common prefers the seeds in spruce cones. But the Parrot’s target is the larger offering of the Scots pine. And he’s always ready to give a few quick jabs with his super-sized bill at any cone standing in his way.

The males are decked in similar red and brown plumage to the Common while the females wear similar green, brown and grey to their relatives. Late last November a birdwatcher in Berkshire photographed what were thought to be Common Crossbills. These pictures were posted on a bird club website where alert viewers soon realised the birds were something more special.

The internet clicked into gear as photographs were shared and it was soon realised that the birds were Parrot Crossbills. The race was on to see them and birdwatchers from all over the country came to try and find them on Arctic-like heathland near Camberley. 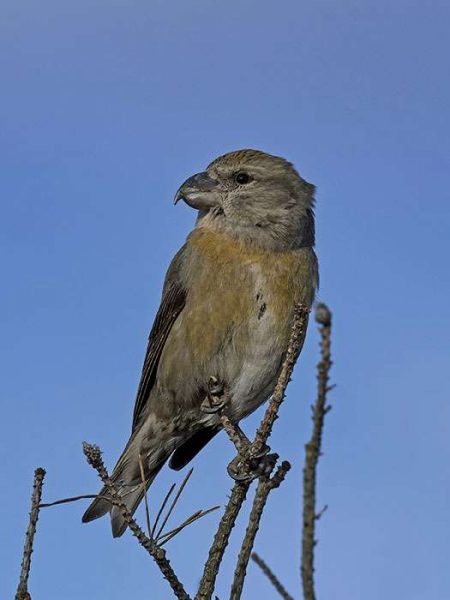 Called Wishmoor Bottom (honest – the Wish stream dividing Surrey from Berkshire is at the bottom of moorland habitat) it is a vast area of forest, tracks, gorse, heather and bogs used for Army training exercises. Not an easy place to find a bird that’s a few shades bigger than a House Sparrow and can give you the run-round, having already flown hundreds of miles from Scandinavia or Russia.

However as there were as many as 16 of them the task proved easier than expected. When they were deep within a tree they were easily missed. But they were invariably located when they flew excitedly from tree to tree and called with a deeper and subtly different sound than the Common Crossbill’s ‘gyp’.

In the early days of their stay they were also easier to locate because so many people were looking for them. The first time I went it was a case of finding the birders who were all staring in the same direction and waiting for the birds to show. Luckily one male soon did. He walked along a branch, impressively snapped off a cone with his foot, balanced it on a bench of pine needles, and prised open the cone scales for the prizes below.

But for those of us who like to keep a list of species we have seen in the county there was an annoying problem. The birds were 100 metres into Berkshire so could not be counted on the Surrey list. I waited for a couple of hours for them to cross over the border, but they never did. Frustrating! 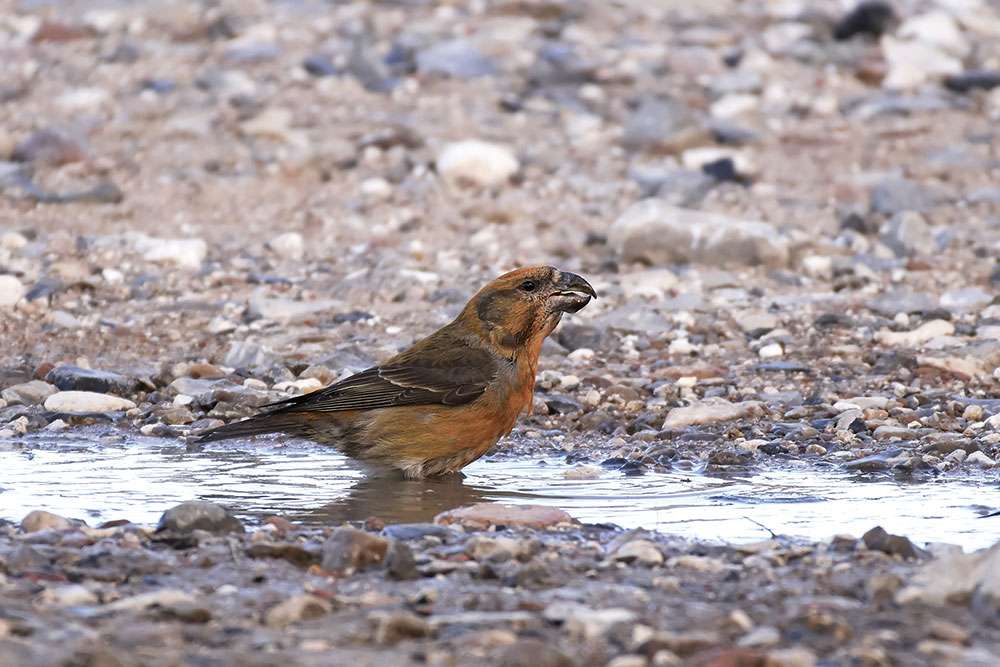 Friends and I thought if a flock could get to Berkshire then there was a good chance Surrey must be hosting others. So, over the next few weeks I gave the Scots pine areas around Cranleigh optimistic attention, spurred on by reports of other irruptive Parrot Crossbills being seen often in places as far apart as Norfolk and Derbyshire.

Sadly, everyone’s hunt in and around the Surrey Hills proved fruitless. But by now the Berkshire birds were regularly being seen flying to and from Surrey where they were apparently roosting. I tried again, waiting over three hours in freezing conditions. I gave them a helping hand by breaking the ice on the puddles where they were known to come down to drink, but this failed to make them show.

Two days later I gave it another three hours to the accompaniment of bitter cold and nearby soldiers’ gunfire. Again, no joy. It was eight days before I was able to try for a fourth time. Buoyed by reports of Surrey sightings over the previous week I searched for another four and a half hours. Optimism is an essential part of a birder’s kit.

And the rewards were there. 18 Parrot Crossbills on a feeding frenzy in a Scot’s pine that was – just – inside Surrey! All too soon the restless flock took off and flew right over my head further into the county before being lost to view.

It was a unique county encounter. Only three birds have been reported in Surrey before, in 1831, 1868, and 1963. There is documentation controversy over them all. Nobody can say when the next visitation could be but as I write they are still present and there are hopes they may even breed here.