Shall I or shan’t I? For years I’ve been debating about whether it is time to give the one and only rhododendron in the garden the heave-ho.

It has often failed to bloom and even when it does the pink flowers are few and far between and don’t seem to last very long. And then I’m stuck with a largely boring green bush for another year, failing to earn its keep and hogging precious space better used by something more fun. Well, like a lot of gardening jobs that need doing, I’ve always delayed the day of that rhododendron’s execution. After all the essential garden chores I’ve been keener to get out in the field to go birding instead.

And now? Well, if I have my way, that seven foot high garden misfit will be allowed to live! Forever! Things have changed. I love it.

After all those years it has finally paid for its keep. Early one morning as I was nipping down to the shed I heard a high-pitched call – ‘zit zit zit.’ A breakthrough moment. I knew the call could only be one thing – a little bird the weight of a 5p piece – but where was it? I strained my ears but could not be sure if it was in the crown of the oaks or somewhere else. I heard the sound again: ‘zit zit zit’.

My pulse was racing. It was really hard to tell where it was coming from. I looked above and around but there was no sign of the caller. Would I fail to see it before it inevitably flitted out of the garden? Or would I have a moment to treasure with arguably the crown jewel of the British birding world?

Again it called, this time much nearer, and out of the corner of my eye I detected a movement in the rhododendron about only four feet away from me. Then nothing. Blast! Then a quick movement again in the shadows at the base of the bush.

It manoeuvred like a mouse. Momentarily I saw a bit of the tail. Then as it hopped through the branches a bit of a wing came into view. Come on boy – show yourself! I feared it would fly but suddenly, after a few more seconds, its head came into view as it popped up onto a branch.

And there it shone in all its glory. It viewed me briefly, and unimpressed, as it moved swiftly on. I had to check it out quickly to make sure it wasn’t its near cousin – the Goldcrest. But the broad stripe of its supercilium, like a white diamond above its eye, plus its golden bronze shoulder patches, gave the game away for sure. Just like I’d hoped. Firecrest! Oh yipeee! 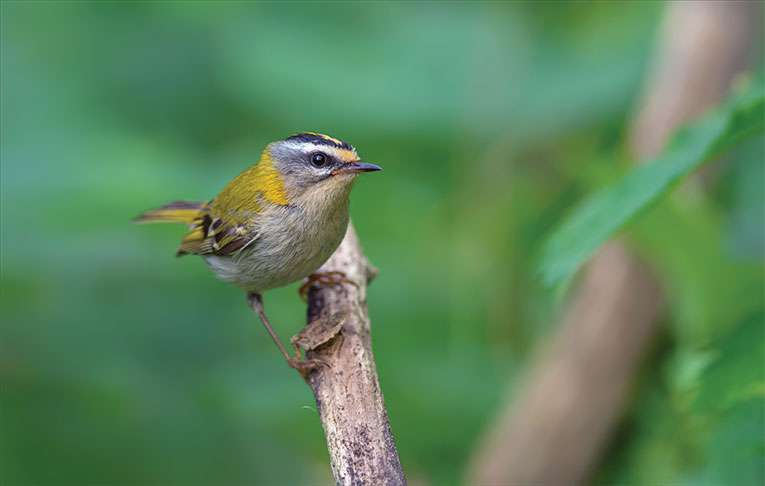 This was the first I’ve ever found in the garden. One reason is that this species has, until the turn of the century, been relatively rare in Surrey. And locally too.

The other reason is that they are, after the Goldcrest, our smallest bird. Even tinier than a Wren. And they move so fast they are easily missed. They don’t pose for selfies like a Robin or Blackbird, The call, and the song, can be a giveaway but for many the high frequency makes it impossible to hear them.

People therefore have to rely just on binoculars and even then risk a strained neck and a cricked back as they look directly up high into a tree where maybe a Firecrest is hunting.

Of course, the best idea is to lie on your back and look through your ‘bins’ vertically upwards. But few are prepared to look so silly or to risk attracting unwanted attention from a passing dog. So there the bird was after a cool 29 years of me hoping and looking. Bird species number 96 for my garden! I felt elated as I watched it with my naked eye. It was so close I could almost touch it.

But then just 30 seconds later, after snatching all the microscopic insects it could tease from that rhododendron, it flicked back up and out of view into the tree canopy. Firecrests are constantly on the move to get the food they need to keep up their calorie count. 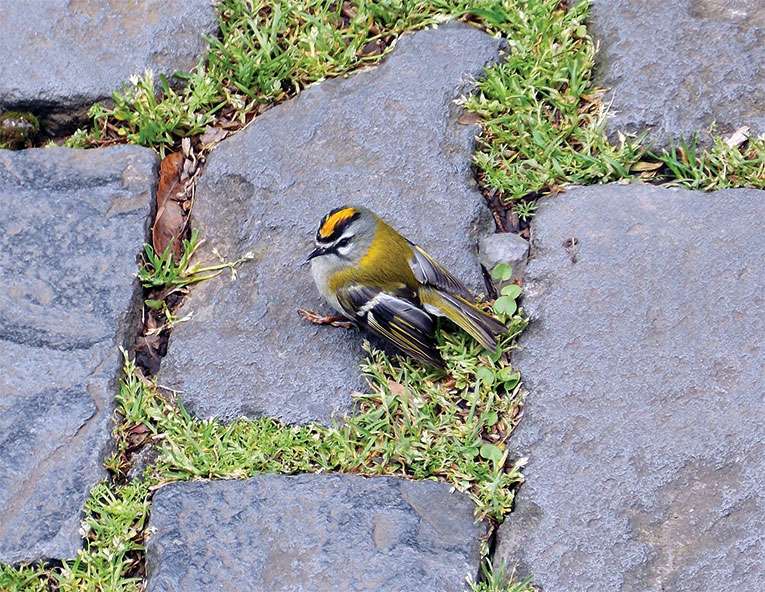 This beautiful species may, with patience, now be found in the Surrey Hills. But it was only an occasional visitor and passage migrant until the turn of the century.

I saw my first local one on Holmbury Hill, and others since, including breeding season birds. Then the singing males raise their fiery orange crowns Mohican-style to court females in a stunning acrobatic display.

My last sighting was low in a front garden hedge in Ewhurst when I was unsuccessfully following up a report of Waxwings six weeks ago. I’ve looked out for ‘my one’ since – but with no luck.

Maybe he’s slipped in and out a few times without me connecting. Or he could be on the Continent. Or maybe he’s in your garden – right now!