The last few weeks have, as usual, been one of the most exciting times in the birding calendar. Summer migrants started arriving from the south as early as March.

Sand Martins, Swallows, House Martins – to name but a few – had all made it around here by the end of that month, flying north over Cranleigh and surrounding villages and filling the gaps vacated by wintering visitors such as Redwings, Fieldfares and Meadow Pipits.

But first back, as usual, was a Chiffchaff. I had my first sighting of the year in Cranleigh on 13 March when there were three singing and fly-catching from trees along the Wey and Arun Canal.

Within days these chirpy chappies were abundant along the woodland edges.  They could be easily seen before the trees came into bud, flicking through the branches above carpets of snow-white wood anemones and blazing yellow lesser celandines. If there is a spring that launches spring, for me it’s the ‘Chiff’

Earlier still though was another species, some of which have completely changed their migration strategy. The Blackcap. This little silvery-grey warbler is the one you can frequently easily hear in the area but far less often see.

Its fluty jumbling warble, made up of a rich variety of deeply beautiful and squeaky grating notes, invariably belts out from deep cover with hardly a pause for breath. No wonder country folk once called it the Mock Nightingale.

The Blackcap is also something of a ventriloquist so even when you think you have pinpointed where it is singing you may find you are way off target. It will have been the bird you briefly saw only in the corner of your eye. The one that darted out of its hiding place – 10 feet away from where you were looking.

This is one of those birds, like a Common White- throat or Green Woodpecker, whose name tells you what it is. ‘Blackcap’. Except around half of them go incognito. The females, and young males, have a gingery-brown cap.

My first presumed new spring arrival this year was a male singing his head off from a blaze of blossoming blackthorn along the Downs Link on 29 March. Did I see him? Nope.

Another interesting aspect is that because they are getting well fed here and have not had to fly so far, they should be fitter than the more long distance holidaymaking  Blackcaps.  They can be the first to ‘get their towels by the pool’ and find the best places for breeding success. 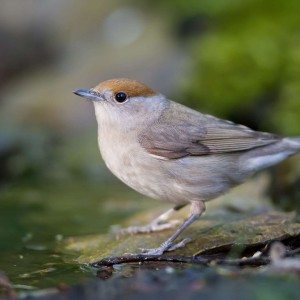 Are individual Blackcaps now resident in Britain? How many of the German birds annually backtrack to us? Researchers from the British Trust for Ornithology, Oxford University- and others, have started a three year study to find out much more about this wintering enigma.

Working this last winter in Cornwall they fitted tiny geolocator backpacks to Blackcaps and gave each bird a unique set of colour rings on its legs to aid visual identification.

If  the birds return to the same gardens  at the end of 2017 – and the researchers  can catch them – in­ credibly they will be able to ‘read’ the data on these devices and work out within 70km just where these fellas (and ‘Browncaps’) have been.

It should throw up a fascinating insight into the life of one of our best songsters and currently puzzling species.

If you are lucky enough to spot a Blackcap with a ‘backpack’, or sporting coloured rings, do please report it to

Want to know more about birds in Surrey? Why not join Surrey Bird Club? Subscriptions are only £15 a year and this brings you a quarterly magazine, an annual bird report, organised field meetings and lectures.

Sign up with a direct debit at www.surreybird­club.org.uk and you will be given a copy of the 700 page ground breaking book Birds of Surrey, by Jeffrey J. Wheatley, TOTALLY FREE! Its cover price is £35.

Published in 2007, it includes records from an army of keen birders, including myself, a systematic list and species accounts, breeding distribution maps, analysis of breeding surveys, population estimates, charts and histograms, ground and aerial photographs, plus vignettes, paintings and line drawings.

There are also background chapters on climate, history, geology, personalities, other societies and habitats and the effects of human intervention.

The offer applies while stocks last only