People Profile – The Robertson’s – From a tiny seed

‘With the right light and some simple equipment, it’s easy to grow from seed and propagate even more from the parent stock. Armed with enthusiasm and a bright idea, Robert Alexander Robertson started business in Bramley and made it bloom.’

Robert Alexander Robertson didn’t know what he was starting when he travelled from Glasgow to Bramley over 91 years ago.

R.A. Robertson & Sons has been a familiar fixture on Bramley High Street since 1926. Founded by Robert Alexander Robertson, the business was originally set up to provide a service for charging accumulators, but by the 1960s, the business had expanded to both groceries and electrical appliances. By the time Leonard Robertson succeeded the family business, a much bigger market for electrical products had grown, so new premises were built to keep up with demand. These premises are the same that stand there to this day. 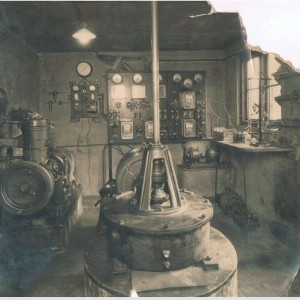 Leonard passed the business down to his three sons, Graham, Gerald, and John. John is currently in charge of the electricals as a fully qualified electrician.  His expertise ranges from changing a simple light bulb to rewiring a whole house. Gerald has since left, and Graham, the youngest, is a fully qualified Miele engineer with an impressive 35 years’ experience under his belt. The two brothers run the family business, along with the help of an expert and loyal workforce.

In 2010, George Robertson joined the family business and is the fourth generation the store has seen.

It all started when Robert Alexander Robertson, Graham and John’s grandfather came down from Scotland, where he was working for a Scottish electrical engineering firm that erected a windmill in the grounds of a large house in Station Road in Bramley.

When the windmill was complete, the owner wanted someone to stay behind to maintain it so Robert volunteered to stay, renting lodgings in Eastwood Road from which he kept the windmill running for two years. 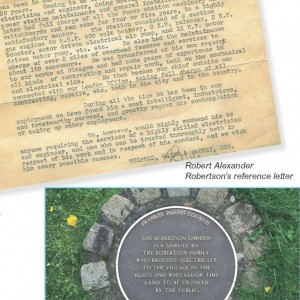 In 1926, the main power cable came to Bramley and Robert saw an opportunity to start a business charging accumulators, getting involved in an assisted wiring scheme in which people had their houses rewired for these power cables. He went out and got himself qualified to rewire houses and set up a small shop opposite the bed centre in Bramley. As the years progressed and he got married, Robert acquired what is now NISA and converted it into a grocery, green grocery, and electrical shop, moving into the accommodation above

‘He pulled him out of school and into work’

with his family. However, as soon as Robert saw his son, Leonard, come home with a prefect’s badge, he pulled him out of school and into work as an electrician, wiring houses.
Robert and his wife ran the grocery side of things with Leonard’s brother in law, whilst Leonard ran the electrical side of the business. At the back of the greengrocers there was also a small fishmongers for which John remembers going to collect the fish off the train when the Horsham to Guildford railway line was in use.

Robert could see that the electrical industry was expanding with the invention of refrigeration and TV, so when three cottages nearby became vacant in turn, he bought them up with the intention to knock them down and build a shop devoted to the electrical side of the business. The Robertson’s lived in a flat above, and rented a back one out as another source of income, with one of the cottages reserved for the chief TV engineer so he could be close to the shop. They recall that the first colour TV they sold was to the dairy on the corner, whilst John remembers his grandfather buying 50 Electrolux fridges in the 60’s because they were in short supply, selling them in no time.

Robert’s grandchildren loved the shop from the start, racing back every day after school to help out. John remembers they used a lot of paraffin for heating and they’d leave the cans for the end of the day because they knew he liked filling them for customers. John studied for an apprenticeship and qualified as an electrician, working in the field for five years, before coming back to his father to work in the shop. Gerald loved electronics as a kid, and he was always playing with children’s electrical sets, however he was more interested in the theory, 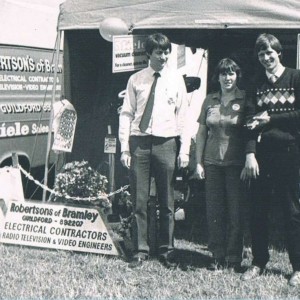 Whereas Graham and John were more practically minded and wanted to get their hands dirty.

TV was a large part of the shop, with three TV engineers employed at one point. There was also a full time domestic engineer in the repair workshop, who worked with toasters, kettles, and irons, repairing dozens of electrical appliances a week for local customers. In the 60’s, Miele came to a trade show that Graham attended, and he decided to take on the agency and become one of the first Miele agents in the south of England.

‘Part of peoples every day lives’

The team have been going for years for courses on the products. This means that, aside from phoning Miele up themselves, Robertson’s now provide the only service engineers in Surrey trained specifically for the brand.

The service has always been an important aspect of the shop. If they can’t repair an item, then they’re able to install and fit a new one, along with providing advice and ongoing help for the customer should they run into any problems.

John says: “We find our customers come to us for the service, they want the product fitted, connected, and demonstrated, and many of them would be happy to pay more for that human element that the internet sites don’t provide.”

‘We’re not just an electrical shop’

Robertson’s has been in Bramley for 91 years, and has become an active member of the community along the way. John says: “people love to come in for a chat. We get people phoning up for all sorts of things such as “Sorry to bother you but I can’t seem to find the phone number for the little shop across the road’.
We like to think we’re not just an electrical shop, but a part of people’s everyday lives too.

The shop today sells all manner of appliances, from televisions to dishwashers, to DVD players. The friendly staff are on hand to assist with any questions you may have, from queries about faulty lighting to replacing your washing machine.
Robertsons of Bramley 01483 892207

Back Joy Of Cranleigh – What was happening in Cranleigh in May 1917?
Next Crane Spotter – May 2017 – Blackcaps
Related Articles
No Comments