As more and more developers move in to Cranleigh to erect homes for thousands of newcomers let us spare a thought for the fate of some of our long-established residents. England’s ‘largest village’ is changing fast and surely will not be able to celebrate that tag for much longer. Every field currently seems to be fair game for a planning application. And once a development gets approved then this appears to only create appetite to try and fit in even more.

We’re taking a hammering and so is one of our more scarce and beautiful birds. The Yellowhammer. A lot have been forced to move out already – and they won’t be coming back. The fields and hedgerows where they once fed and bred are going – and in a number of areas have already gone. The Yellowhammer, a cheery countryside bird, is a little longer than a House Sparrow. It sings its distinctive song from the top of a tree, bush or hedge. As many people have remarked, use a bit of imagination around its eight-note song and you might hear: ‘A-little-bit-of-bread-and-no-cheese.’ 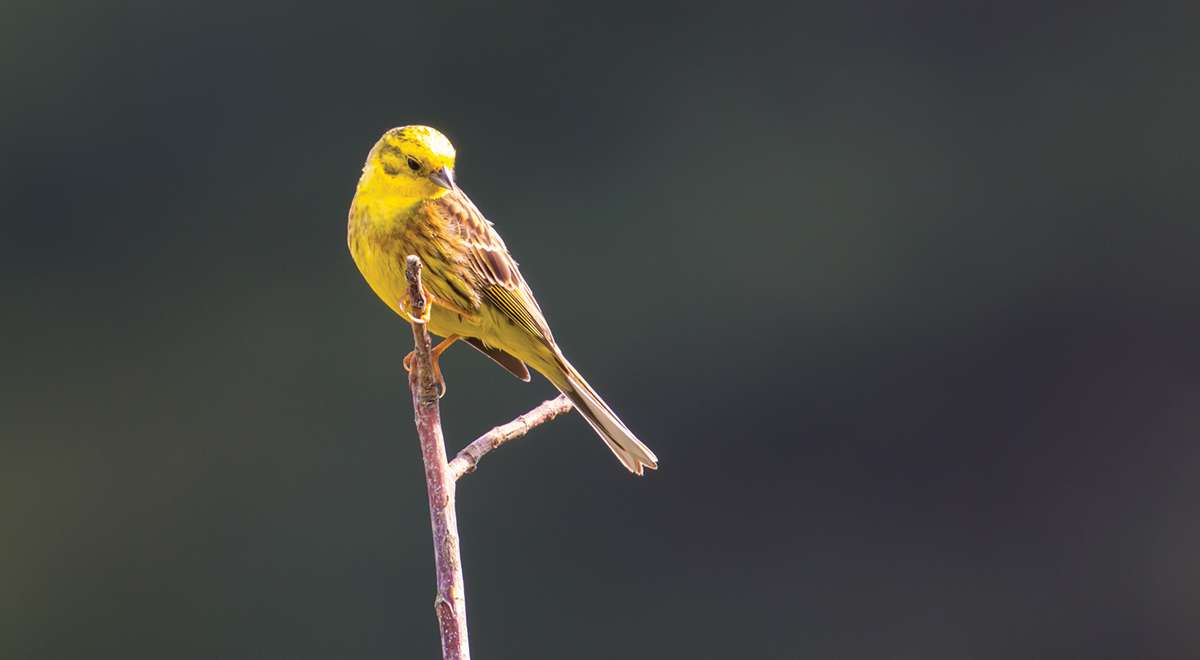 Males have a fierce yellow head and underparts, with a reddish brown ‘waistcoat’ and rump, with brown and black streaked upperparts. When flying away it often gives a short ‘click’ call. The females, like many in the bird world, are much drabber. And that’s a smart move because they don’t want to attract a predator while sitting on their eggs. I vividly recall seeing my first one when I was only just four years old. I remember thinking how beautiful it was. I had never seen one before and the moment was all the more poignant because I don’t think I’d previously seen death either. This little chap had been killed by a cat and I was struck by how it was retaining its dazzling yellow splendour while being so lifeless. I could not fathom how such an amazing creature could possibly be dead. It made me very sad.

Today I’m sad for the fate of the Yellowhammer on a wider scale. It is on the official Red List as a species of greatest conservation concern. Assessment criteria for this includes historical decline, trends in population and range, localised distribution and international importance. Around Cranleigh and surrounding villages it was once a widespread and common resident breeder. I used to see as many as 50 together. Back in 1989 one of Surrey’s biggest ever counts was made in Ewhurst when there was an exceptional flock of 200 in a field unusually left as stubble. Most of these would have been winter visitors. They brought with them a rarity that breeds from the Urals to Siberia and China, a Pine Bunting – Surrey’s only record and the first seen in an inland county of Britain.

But the local, county and national population was already in trouble and by 1998 the Yellowhammer stopped breeding in the Surrey Hills at Winterfold Heath. That looked ominous and so it proved. This century it became far harder to find around the village. Counts of 20 or more in Surrey are now exceptional and here a pre-breeding season flock of even 10 would be highly notable. Thankfully it is still possible to see the Yellowhammer around Cranleigh but it is much sparser and a couple of pairs on a two hour walk is a good return. At least five of this bird’s previously favoured areas are now either occupied by homes or are muddy development sites. The loss of so many working farms has undoubtedly contributed to the Yellowhammer’s decline. Changes in the way we farm, such as autumn sowing, means stubble fields are rare now so the bird has to go elsewhere for food.

But where the Yellowhammer does hang on, as it does here, it would be good to do what we can to encourage it. Humans obviously need somewhere to live – and so does the Yellowhammer. What is needed is a balanced, conservation-minded approach that allows both to have a home. ‘No-cheese’ need not mean ‘no choice’.