This month I’ll be looking out for a generally hard-to-see migrant bird that passes through the county on autumn passage – the Ring Ouzel. It’s the moorland version of our common Blackbird and not a species most would expect to see around Cranleigh and surrounding villages. It has been a scarcity here. Up until the end of the last century I could find no definite records for the area whatsoever. But this probably meant nobody had deliberately searched. Undoubtedly the species was no complete stranger to the vicinity. However, I could never find one. Since then I’ve worked out a few effective ways to see them – but first I’ll go through what they look like.

The male Ring Ouzel is slightly smaller than the male Blackbird but has longer wings and a proportionately longer tail. It is mainly black with a pale yellow bill which, unlike the Blackbird, has a dark tip. A distinctive white bib forms a white crescent below its throat. The wing feathers are edged white, forming a silvery panel, and – if you are fortunate to be close enough – you may see the edges of its flank feathers are white too, creating a number of ‘V’ shaped markings.

Females are brown with less distinct features and they have a dirty white ‘half-moon’ bib while young birds, known as first-winters, have more visible ‘arrow head’ shapes but look like they have rolled in the mud and need a bath. The young females lack any obvious crescent. We know Blackbirds well because they are often quite tame, come to our bird tables and sit on our lawns. Not so the Ring Ouzel. It is a bird of wild and rocky open places on its breeding grounds in Norway and mountainous terrain in Britain.

I came across my first breeding pairs on Dartmoor just after dawn one April morning when it was icy cold and quiet and the well-dewed heather was steaming under the sun’s first rays. Until then I had not seen them but suddenly the males burst into song. Three, each on its own wind-dwarfed tree, filled the still air with a hauntingly sad, melancholy mixture of repetitious fluty notes that must have carried for miles. 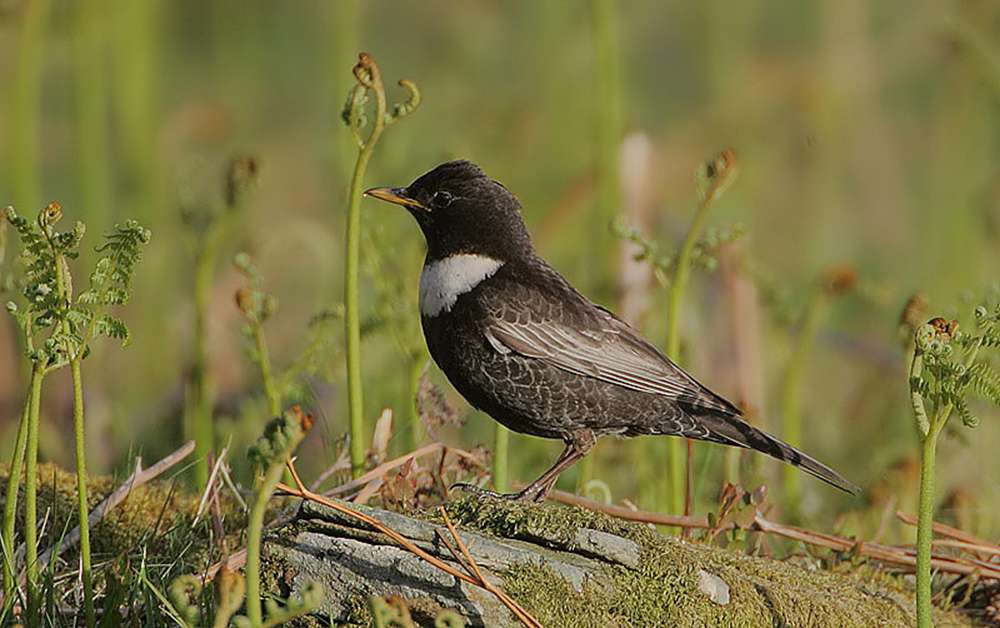 Life can be tough on the moor and this species was letting me know it with a song that seemed to protest it would rather be raising young somewhere warmer, like back home in southern Spain or northwest Africa. On migration the Ring Ouzel is a shy bird and easily disturbed if you see it in one of its likely spots, such as a cricket pitch, park or sports ground. It may also be located by an angry sounding clicking call – ‘chack’. The long-awaited first ever documented record around here was a spring male bird found near the pond on reclaimed heathland at Holmbury Hill by ranger Peter Haynes on 17 April 2001. It was observed for no more than five minutes before being lost from view in the trees. I whizzed up there hopefully – but not quick enough.

It took another six years before I found another. This was a young female bird at Winterfold on 6 October 2007 – the same day as that autumn’s first Redwing. It was feeding on Whitebeam berries and stayed until the berries ran out the next day, enabling a number of other local birders to see it. Other records followed in the Surrey Hills with a first-winter male on 2 November 2008, after easterly winds, and a male and young female on 16 October 2014. They were in the very same tree as the bird seven years earlier.

From this I learned to do a recce early each season to find likely trees where Ring Ouzels will stop for an autumn feed. I have found the ripe red Whitebeam berries are their favourites but, annoyingly, this tree only appears to fruit every three years. Interestingly though, if the Whitebeam crop fails it seems that the orange Rowan berries do well. And these also attract ravenous Ring Ouzels. Inevitably there will be flocks of Fieldfares from Scandinavia in the vicinity too and by looking through them carefully I’ve regularly found our target bird hiding among them in recent years. They migrate together and will strip a tree of its fruit in days. Two years ago I enjoyed seeing three Ring Ouzels for some days in a larder frequented by only eight Fieldfares. But within a couple of days another 120 Fieldfares had joined in the merry berry feast. The food source was gone next day – and so had the birds.

A more unusual way to see Ring Ouzels has been revealed to me in the last two years. This involves getting up at first light and scrutinising flocks of fast-passing migrating Fieldfares and Redwings. It is also possible to ‘pick one up’ by hearing its explosive flight call – a sound that has been described as a cross between a Fieldfare and a hysterical Green Woodpecker. In one morning last October friends and I notched up an incredible 19 Ring Ouzels this way. This was more than are seen through out the whole of Surrey during some autumns. They were flying singly, and in small groups, among a massive south westerly movement of 1,500 Redwing. Hopefully we can get a record count this year.