A flash or shining iridescent sky-blue shoots by like an arrow – and before you can fully register its magnificence it has gone.

That’s about all most people see of a Kingfisher and even then they count themselves lucky. Lots of people have told me they’d love to see one but never have.

They are generally shy birds and it can take some patience to find one. They can spot little fish at some distance so it’s no trouble seeing you 100 metres away. Get within half of that and they are off like a shot, further along the river.

Sometimes you can get lucky and stumble upon one much closer as it sits intently scanning for breakfast on an overhanging lookout branch beside the water. Early in the day is the best time to catch the Kingfisher.

Most people never forget when they first saw one because meeting what is arguably our prettiest bird is such a special experience.

I can remember being totally enthralled to see my first when I was a boy during a fishing competition one winter on the River Mole at Dorking. It suddenly arrived, seemingly out of nowhere, and landed for half a minute on my rod. What an introduction! 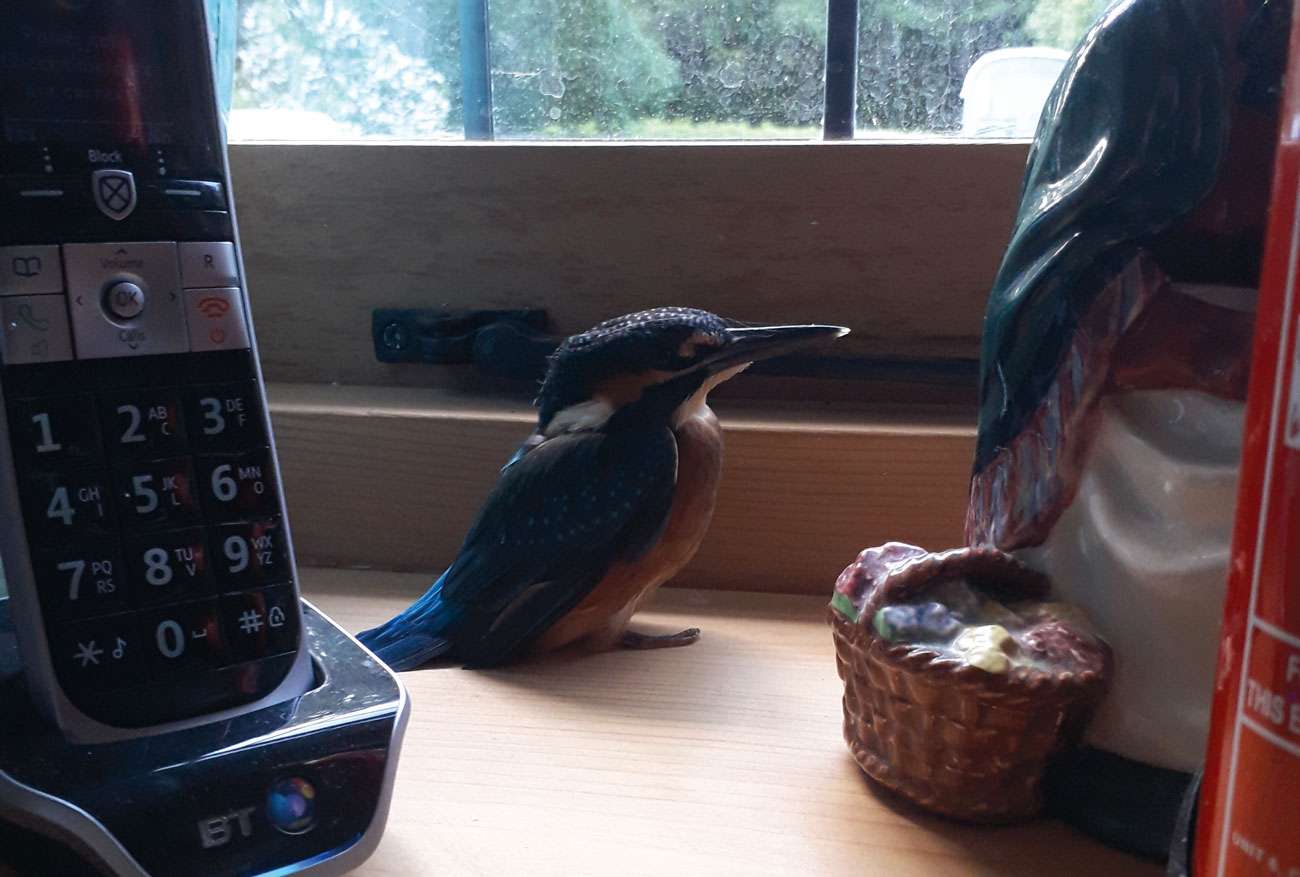 Even though my 10-ounce roach and a tiddler gave me second place, and I won a prize, the catch of the day was surely that bird. It was kitted out to brighten the December dullness with shining Chelsea-blue wings, Man City sky-blue back and tail, Liverpool red legs, flashes of England white around the throat and neck, and Holland orange for the cheeks and underparts.

And that massive referee-black dagger! I wasn’t sharp enough then to work out if it was a male or female, but I learned later that the female has a dash of red at the base of the bill. Not that you are likely to see that unless you have binoculars or are right on top of it.

Kingfishers can turn up when you are least expecting. Go looking for one and they are easy to miss, even when you know they should be around. Be doing something else near the water, like just going for a walk, and suddenly you see one.

I usually hear them first because they are blessed with a snappy two-tone whistle that warns everything ahead to watch out because the birding equivalent of an RAF Typhoon is zooming in at low level.

Hard to see they may be, but you never know with birds. Really crazy, bonkers, one-offs can happen and for a guy in Churt this last summer he got what must rate as a once in many lifetimes experience. Rob Douglas had a Kingfisher in his house!

It apparently flew in through the patio doors, ‘flew around for a bit then settled for a short while before flying back out and resting in an Oak tree for ten minutes!’ He got a record photograph of it sitting on a shelf between ornaments and a phone. 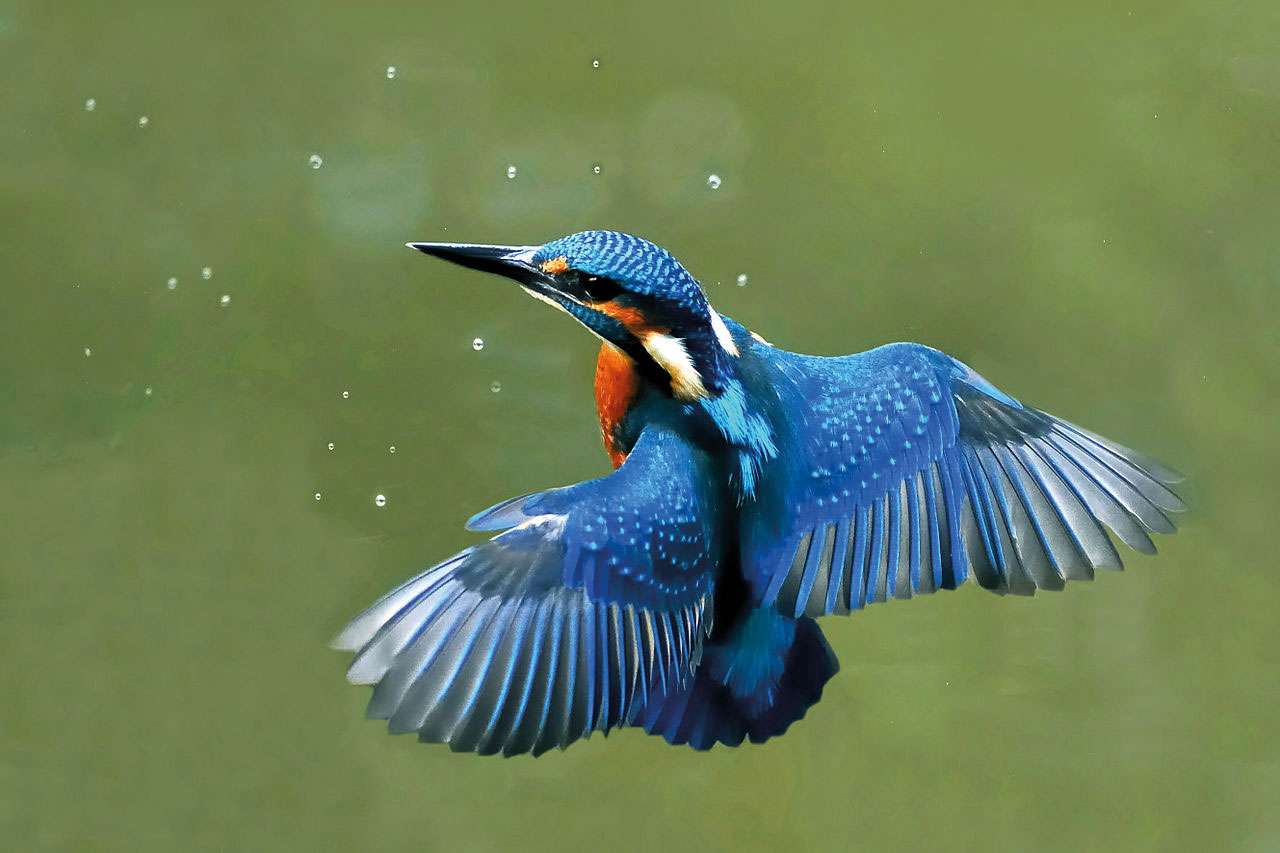 It seems this species can be attracted to windows and if there is a second one visible on the other side of the room maybe it thinks it is flying under a bridge, leading to tragic results when it confronts a wall of glass.

Back in October 1996 a male, and a female, flew into a large window at Cranleigh Leisure Centre, presumably after jetting along the adjacent stream and mistaking the swimming pool for a lake.

The male was killed outright and the badly stunned female was subsequently released, apparently unharmed, by the stream. The male went off to be prepared for a new life at a taxidermist’s (£370). I wonder whose room he is brightening right now. Better there though than a ladies’ hat in Victorian times.

I would recommend getting some of those raptor outline stickers for your windows – this will help protect many fatal attractions.

In Cranleigh, Ewhurst and the surrounding area the Kingfisher is a scarce but resident breeder, being seen along Cranleigh Waters, small streams, fisheries and sometimes even people’s small back garden ponds. At least six regular sites are known.

Like the Churt bird, they have turned up in unexpected places such as ditches in Cranleigh School playing fields, a Ewhurst orchard, and have even been seen hovering over tiny garden fishponds more than a quarter of a mile from the nearest stream. 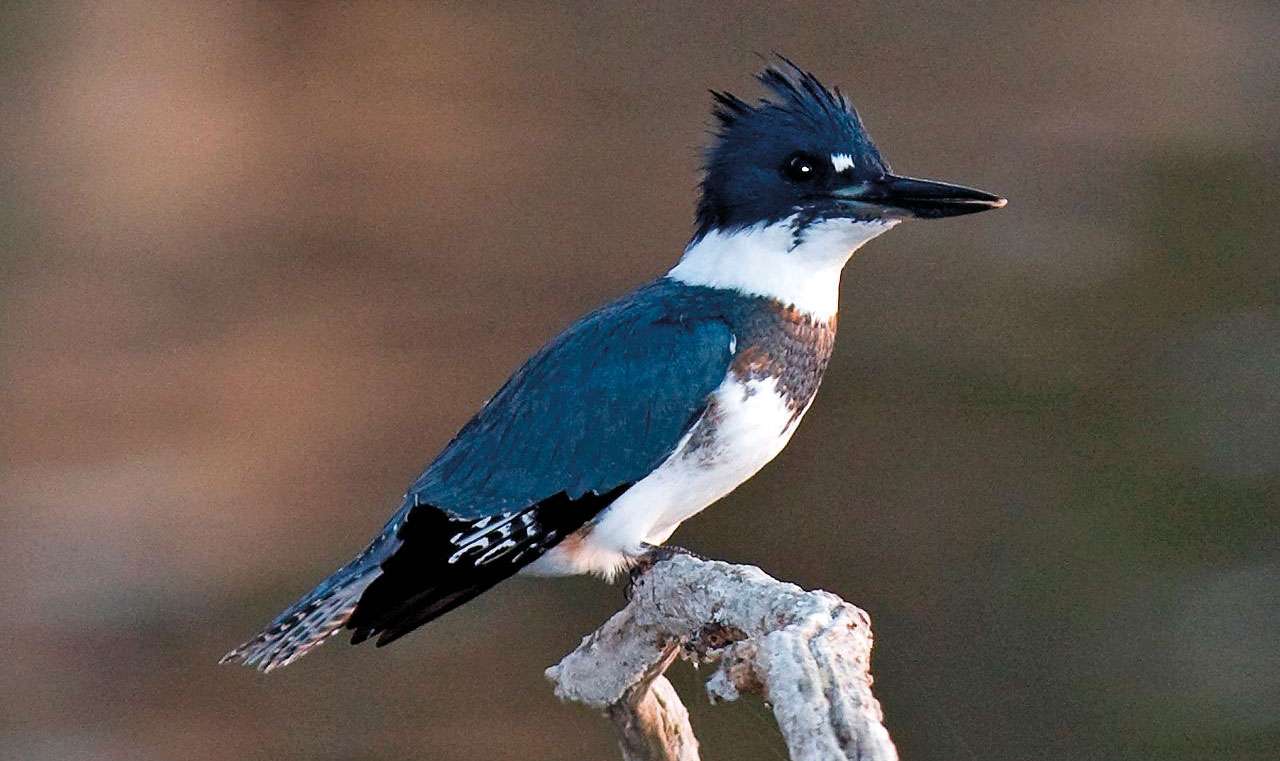 There are as many as 87 different species of Kingfisher across the globe. And they are not all into fish. I’ve seen wonderful varieties in places as far apart as Panama forests, Israeli plantations, and in New Zealand where they sit like sentries on telephone wires and dive into sheep fields for insects.

Like I said, they can be hard to see and my worst experience of this was when a massive rarity to the UK, a mighty male Belted Kingfisher from America, turned up one April Fool’s day on a National Trust lake in Staffordshire. When the news got out, everyone thought it was a joke but emerging photographs quickly proved otherwise.

Dawn next day saw me and many others circling the lake during a six-hour wait for a bird that had not been seen in England for 25 years. Suddenly there was a massive ‘snap’ as birders in unison closed their tripods. You’ve never seen a place evacuate so fast!

News had come through that a fisherman in the north east near Hull had seen it flying round a fishery pool. Oh no! It was back-in-the-cars time for most of us and an additional 200-mile round journey.

But the bird evaded our valiant attempt to re-find it and hundreds of birders went home disappointed.

Only to hear three days later that it had been re-found yet again-on the River Dee in Aberdeenshire. I’m afraid that’s the one that got away.