Cranleigh Film Club is showing Paterson (15) on Thursday 28 February starting at 7.30pm; doors open at 7.00pm. As usual our film will be shown in the Band Room, GU6 8AF, and there is ample parking in the adjacent Village Way car park. Refreshments are available. 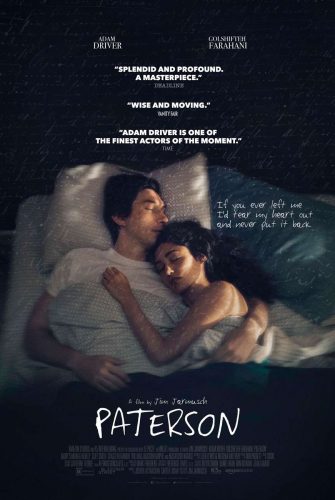 Played by Adam Driver, Peterson is a bus driver and poet; his muse and wife Laura (Golshifteh Farahani) dreams of being a country music star and opening a cupcake business. Set in Paterson (NJ), it’s inspired by local poet William Carlos Williams.

Jarmusch, the director, grew up in Ohio, always interested in film. He moved to Paris, spent most of his time at the Cinemathèque Française, and on a whim applied to a graduate film school in New York. His work is independent, unhurried, focussing on mood and character. He’s also a musician; “he has music in his head when he’s writing a script so his film is more informed by tone than by anything else,” said van Wissem, a Dutch composer who has worked with him.

The review magazine Roger Ebert said, “The man, the bus, the passengers, the bar patrons, all pour into the poetry. It’s a movie that grows more enigmatic on a second viewing. Asked at one point why he doesn’t carry a smartphone, Paterson responds that it would feel like a leash. The film feels as if nothing is happening, but it’s not happening beautifully, and then there finally is an event that’s heart-breaking and comical.”

And Tim Robey in the Telegraph: “It’s an honour to know Paterson, and a serious ache to say goodbye. Farahani’s adorably daft performance as Laura manages to avoid all the manic-pixie traps – just as Paterson does, we cherish our time with her, and we also value a bit of sanity and space. The film has incidents rather than plot: disruptions, minor mishaps, happy accidents. How Jarmusch takes this match-stick house and fills it with such calm and wisdom is a mystery with only one real answer: he’s an artist. What’s consoling for us, and will honestly make this a film a treasure for years to come, is getting to partake in it. In a culture of manic oversharing, Paterson undershares – he doesn’t even have a mobile phone, let alone social media.”

“Driver has never been more beguiling as an actor,” Guardian.

Back Book Review – My Box-Shaped Heart – Rachael Lucas
Next JUST DO IT! No time like the present . . .
Related Articles
No Comments