When I was a little boy, my favourite thing to do in the world was to visit my grandmother, every Sunday, after church.

We’d pull into the drive, in the bottle-green Morris Minor, and my father would step up to the door, heavy boots re- sounding on the porch, and rap the big, brass knocker with his signature five knocks/pause/two  knocks pattern. “Shave and a haircut, two bits”, I vaguely recalled my mother’s voice explain, when I asked, “Why does Daddy knock like that?”

And then the door would swing open, and there would be my grandma at the doorway, all powder-white  curls and milky eyes. Her laugh was her best feature. She lit up a room with her riotous chuckle, made you feel warm inside. I  would  push  past,  between  my father’s  legs,  echoing her giddy laughter and flashing the broad, toothy grin I reserved only for her, to wrap my small arms around her ample frame.

Her hugs were like coming home. My head resting on her chest, my nose filled with her lavender perfume, feeling her body shaking with mirth at my enthusiasm.

Grandma  was my favourite,  because  I was a naughty child.

Mum and dad always said so, told me I was wicked for smashing the good china and digging up the garden.

At which point they’d pointedly look from me to Billy, my cherub-cheeked, four year old brother, before telling me I was a very bad boy for trying to place the blame on such an innocent little boy.

And then they’d scold me and leave, missing entirely the mocking eyes and protruding tongue of my angelic little sibling.

Grandma  believed  me, and that is why I loved her the most.

In the spring, grandma and I would walk, hand in hand, down to the fields behind the house, to see the buttercups in bloom.

Grandma loved to see the golden flowers, sprouting all over her field. She’d pick one, turn to me, and say, “Now tell me, do you like butter?”

I’d laugh and say “Yes grandma, you know I do!”

To which she’d reply, “Well, let us check!”,  and shakily raise the flower to my chin.

I’d wait patiently while she fumbled and then squinted her cloudy eyes to look for the yellow glow underneath my jaw.

Then, that warm chuckle again. “Ah, so you do!”

One day, in the following spring, we were due to visit grandma once again. It was my mother’s birthday, and we arrived to a wonderful tea, laid out on a table that grandma had covered with her best, white tablecloth.

The table was topped with all manner of fresh fruits, desserts, and fresh bread with jam, and grandma had placed her most expensive tea set, reverently in the middle. Piping hot tea filled the teapot, steam already rising from its elegant spout, adorned with painted buttercups. It was my favourite tea set too, and she got it out rarely.

Billy and I were ushered outside as the adults convened in the kitchen, putting the finishing touches to the meal.

Feeling a little put out, I turned to Billy.  “Fancy a game?” I asked him.

Billy pouted for a minute, casting his eyes about in thought, before a devilish glint entered his eye.

“I want to play tag!” he proclaimed.

“Alright Billy, I suppose so”, I sighed.

“Me first!” he yelled, before scarpering off as fast as his little legs could carry him.

Wanting to be fair and not catch him immediately, I resolutely kept up a jog in order to prolong the game, which quickly turned into a sprint as I saw where he was headed. The dining room.

I watched him duck inside with an exhilarated squeal, and heard a sickening crash right before I ducked in after him. My eyes were met with devastation, and Billy was at the centre of it.

There he sat, wild curls framing his flushed face as he took in what he’d done.

Shards of  grandma’s  precious tea set surrounded  him, vivid red strawberries crushed into his dungarees where he’d fallen heavily onto the fruit bowl.

My mother and father came rushing into the room, to stop still and stare at the mess Billy had created.

“WHO DID THIS?” my father shouted at the top of  his voice.

Billy and I stared at each other, neither moving until I saw, with horror, his little grass stained fist, slowly rise from the floor, to point one finger steadily at me.

All eyes in the room glared at me accusingly.

I wasn’t allowed the rescued remains of lunch that day, nor was I allowed dinner.

That night, grandma came into my room to sit at the end of my bed, taking in my tear stained face with her unfocused eyes.

She held her arms out to me and I settled into her lap, my head against her shoulder.

Grandma reached into her pocket and produced a buttercup, and I looked down at it with a watery smile.

She held the yellow sprig to my chin, giving me a wrinkled grin as she did so, her eyes crinkling at the corners. “Well, let us check”, she said

After a moment of peering at my jaw, she croaked softly, ““Ah, so it was”

Two weeks later, my grandmother died in her sleep.

Every spring since, she’s reminded me, in her own way, every time the buttercups sprout up, that I’m not a bad kid, and I never was.

Those little, yellow harbingers of spring remind me to believe in myself every year, even if no one else does. 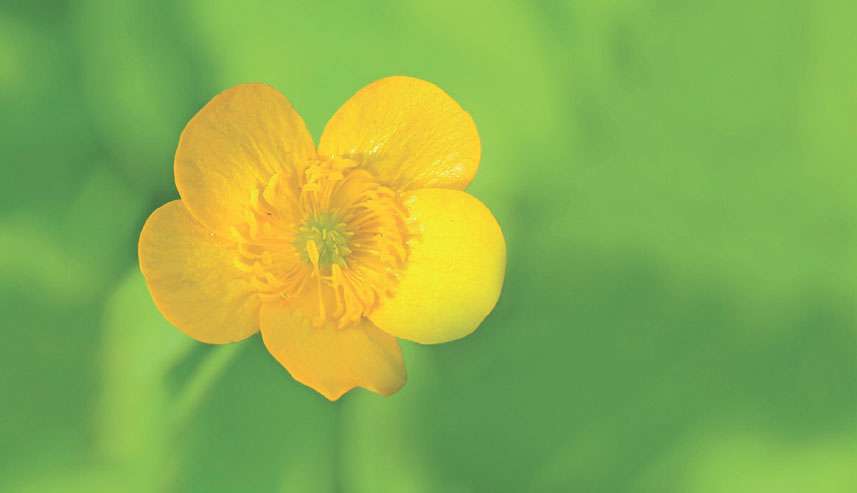 Does the above rhyme look familiar to you?

’I’m sure we all have fond childhood memories of “the buttercup game”. The simple act of holding a buttercup to someone’s chin, and observing a yellow glow, was conclusive proof, for a child
any way, that that person must indeed like butter.

Disappointingly, according to the physicists at Cambridge, the reason behind the glow is more about the interplay between the epidermal layers of the petals, and less about your fondness for spread.

The light passes through to the petal’s epidermal layers, which are separated by a small pocket of air, and the light reflection by the smooth surface of the epidermal cells and the little air pocket, causes a huge increase in the “gloss” of the petals. This is the process that creates the signature golden glow to appear under your chin.

Insects love it too! This glossy sheen mimics the presence of nectar droplets on the petals, making the buttercup very attractive to bees.