On Saturday July 19th, a month after the Peace of Versailles was signed to conclude the Great War, the whole country celebrated Peace Day.

In Cranleigh, the church bell-ringers started the day with a peal of bells at 5.45am. A lunch was laid on for Service and ex-Service men in ‘the Central Hall’ – a corrugated iron building where films shows were held. The room was decorated with flags and streamers saying ‘Welcome Comrades’ and ‘Your King and Country Thank You’. A silent toast was drunk to the fallen. 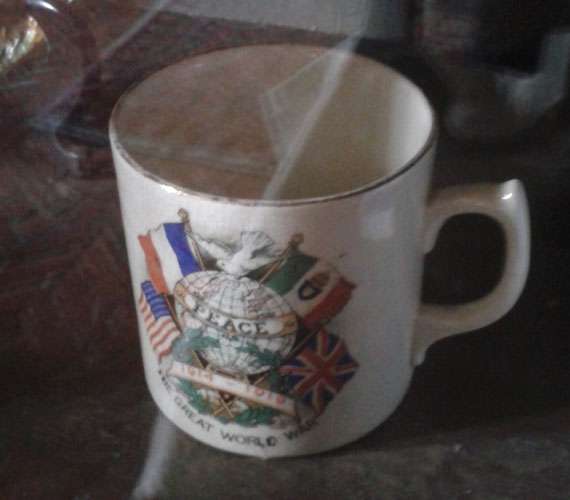 In the afternoon, Sir George and Lady Bonham opened the grounds of Knowle to the public and ‘crowds thronged the park and gardens’, having walked or cycled there down Knowle Lane. There were sports for children and adults, and a play called ‘Pandora’s Box’ was performed by children from Miss Kathleen Tapp’s school ‘Hesketh’ in Bridge Road. After a children’s tea, Lady Bonham gave each child a ‘peace beaker’. 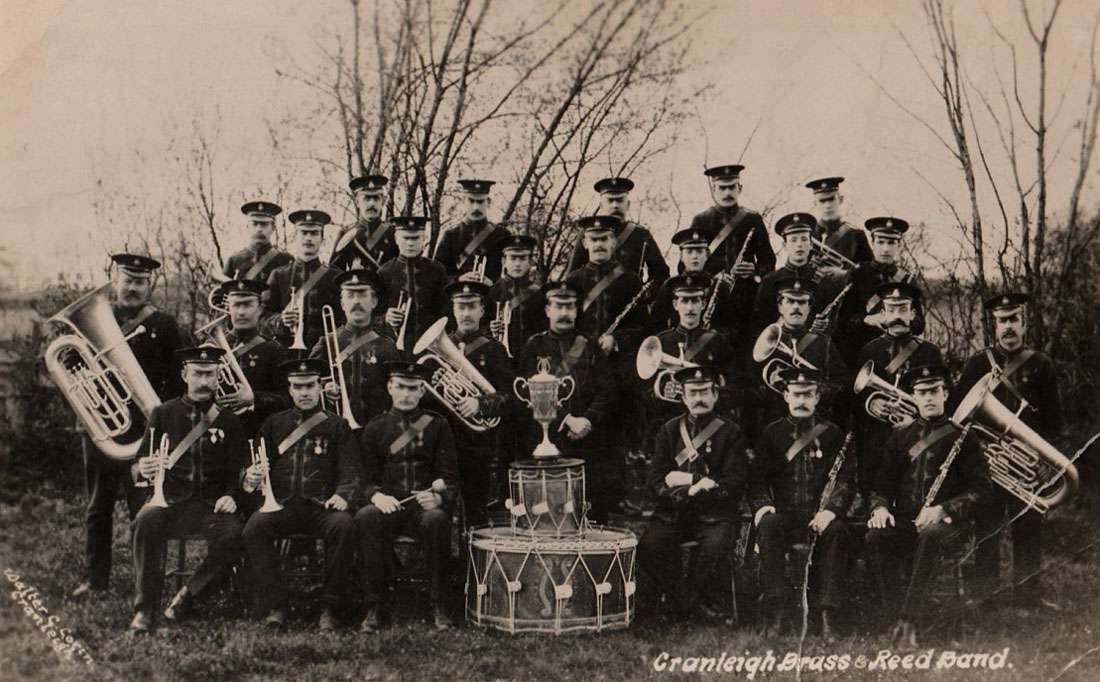 At intervals during the afternoon, the Cranleigh Brass and Reed Band provided music. Then at 8.30 there was dancing on the lawn. At 10.30, fireworks were let off from the roof of the billiard room at Knowle. Dr Arthur Napper (the local doctor, who lived at Broadoak) and others lit flares on Pitch Hill. ‘What would have been a glorious sight was largely spoiled by mist and rain’, commented the Parish Magazine. 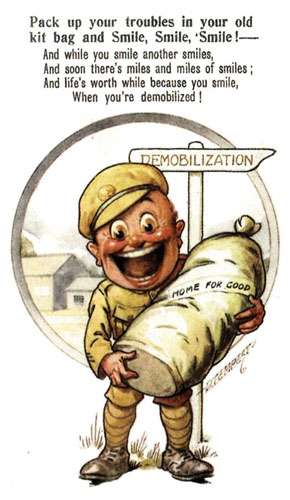 Cranleigh was gradually returning to normal. At the Village School, the wartime dinners for children were discontinued, too much regret, and the War Savings Association was closed; the Church Lads’ Brigade went to camp once again at Folkestone for a week; and the Cranleigh Cricket Week was revived. According to the Parish Magazine this ‘demonstrated that Cranleigh had some players of high standard’. The Cranleigh football team was also revived, and beat Godalming 8-0. 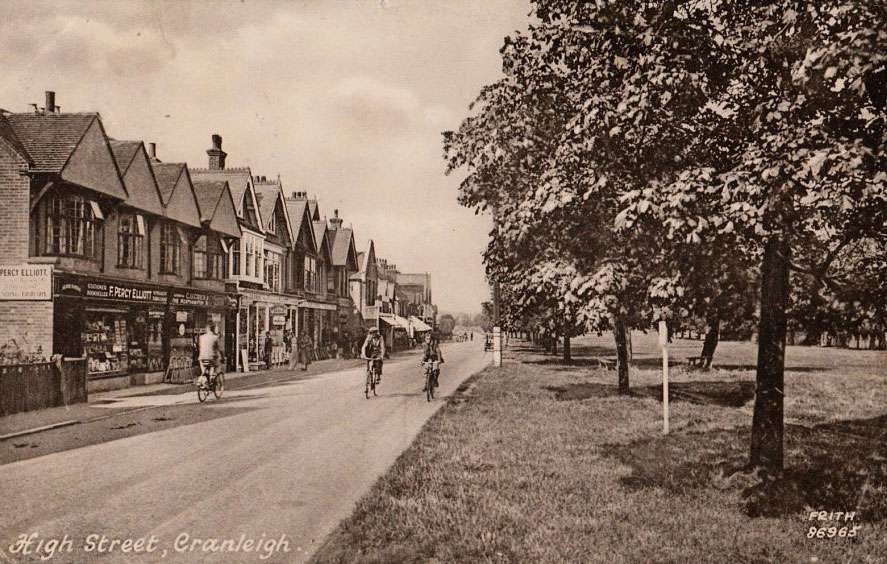 Crick’s new shop in the 1920s, 2nd from the left (a Francis Frith card, courtesy of Mrs Vera Wilkinson)

The St Nicolas Sunday School went on an outing, as before the war. They went by train to Bramley, then walked to Wonersh Park (by invitation). The children enjoyed the peacocks and deer, the ponds and streams, and played cricket and other games. The tea was transported in a motor van. Races followed, and everyone sang the National Anthem. 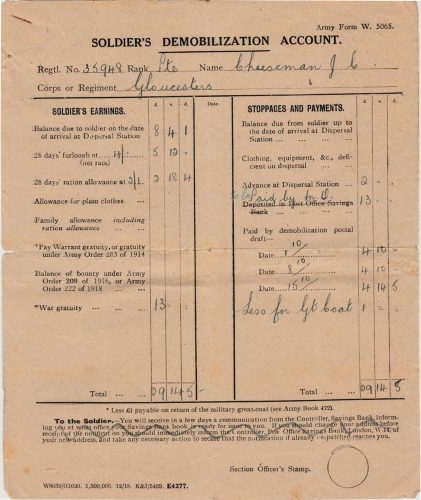 Rennie Crick of the Royal Army Medical Corps, whose career we have followed during the War, was demobbed in February 1919. He went straight to Rushden in Northants, to see Rosie, the girl he had been corresponding with virtually daily for the past year. During the summer he got engaged to her! However, before the diary ends in December 2019, there were indications that all was not well with the relationship. In 1925 he got married, not to the girl from Rushden, but to the girl who had worked for Rennie’s father in the Northampton Boot Store since 1915 and whom he had known in the Wesleyan Methodist church since 1910, when she was 8! Rennie did not go back to the printing apprenticeship in Reigate which he had left for the Army, but instead joined his father in the Northampton Boot Stores. They moved their premises in 1925 to a newly-built shop next to the Methodist church where Rennie worked for the next 40 years. 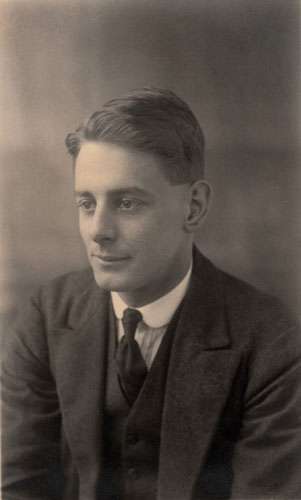 Joe Cheesman after the War

Joe Cheesman, who had been made a prisoner of the Germans, was freed on the eve of Armistice Day and escaped into Holland. He spent Christmas in Victoria Road with his family, but was then sent to Catterick in North Yorkshire, where the soldiers passed a frustrating and fairly pointless time awaiting demobilisation. On Peace Day, there were sports and fireworks at Catterick, and Joe could count eleven bonfires visible from the camp. He was eventually demobbed and ‘transferred to reserve’ on October 21st 1919. In a final settling of payments due to him, he received a war gratuity of £13, and chose to keep his army great coat, which cost him £1.

The Cranleigh History Society meets on the second Thursday of each month at 8.00pm in the Band Room. The next meeting will be on Thursday July 11th, and will mark the Centenary of the World War 1 Victory Celebrations.

Back Singing for your supper!
Next Crane Spotter – July 2019 – ‘Shopping’ for High Street Early Birds
Related Articles
No Comments