In the middle ages, the whole country was divided up into parishes, each with its own church building and also an area of land called ‘the glebe’ which was assigned to support the priest. Cranleigh’s glebe was larger than average, because the clay soil was so poor. The priest could either work the land himself or let it out as a farm. Here, he let out most of it, and it was known as Parsonage or Glebe or Rectory Farm. 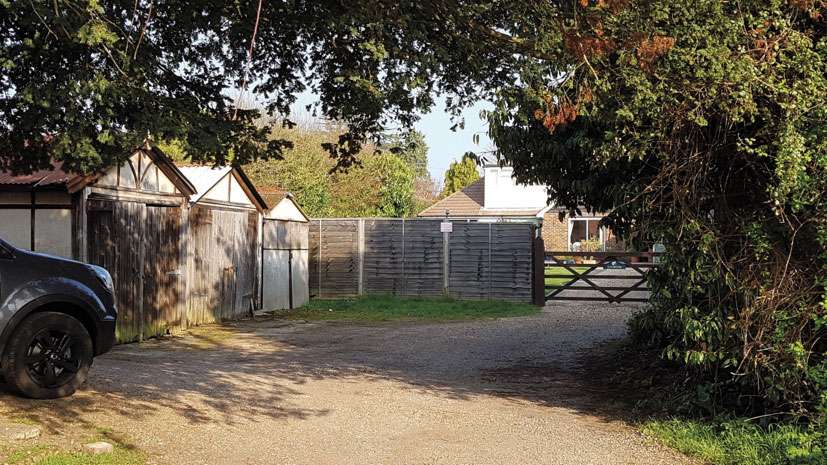 By a happy chance, we have some information about Parsonage Farm in 1819, when one James Puttock was leasing it. In his ledger book he entered the farm produce that he sold. The first two entries read: April 19 Matthew Bristow 17 lambs at 38d each = £32 6s, April 22 Mr Peto a carcased sheep = 18s. (Mr Peto was the master of the workhouse, and was buying in bulk for the inmates.)

Letters of the rector’s family at the same period show that finding a suitable person to lease the farm was a continual headache for the rector. 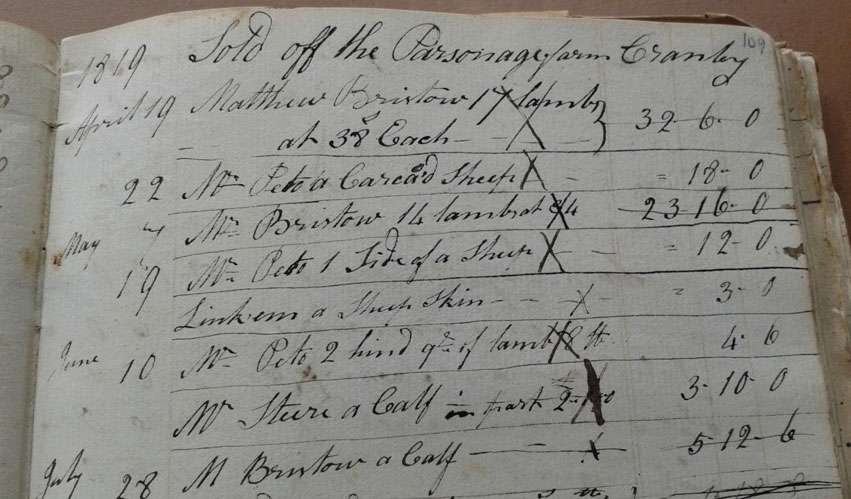 Parsonage Farm featured in the Surrey Advertiser in 1916, when an elderly farmworker fell from a hayrick he was building. He was taken to the Village Hospital, but died four days later.

But where precisely were the Parsonage Farm buildings? Nobody seemed to know. Surprisingly, the deeds of a house in St Nicolas Avenue supplied the answer. An Act of Parliament of 1888 made it legal for a parish to sell some of its glebe land and reinvest the proceeds in other assets, notably government stock. In 1913 some of Cranleigh’s glebe land including part of Parsonage Farm was sold by the rector to Sir Charles Chadwyck-Healey of Wyphurst. The map accompanying this sale reveals that the farmhouse was on Ewhurst Road. 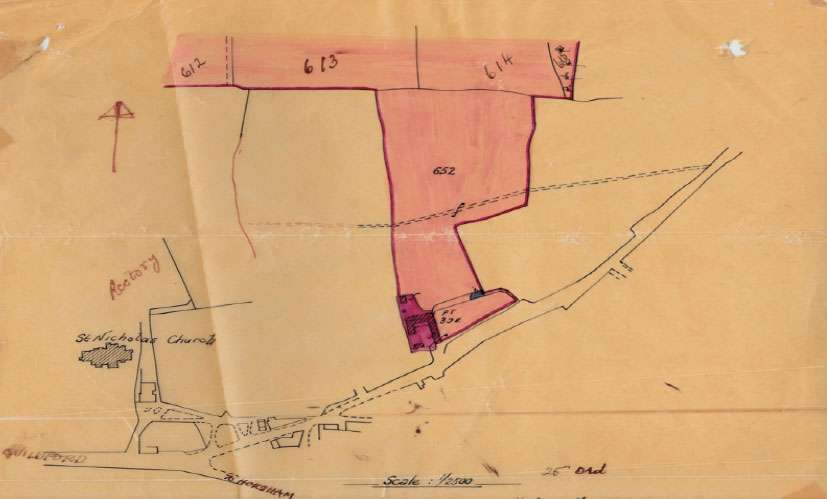 Sketch map of 1913. Pink is the land of Parsonage Farm which was being sold; deeper pink denotes the farm buildings and yard. They are just north of Ewhurst Road. Notice the footpath going east to west which is still in constant use. It crosses St Nicolas Avenue and goes beside the cemetery.

Knowing the location of the farmhouse enables us to identify it on the 1871/4 Ordnance Survey map, where it is shown but not named. It has been circled in red on the map given here. Ewhurst Road is called, rather delightfully, ‘Bedlam Lane’. The more respectable, but less evocative, modern name replaced it by 1891. It is interesting to see the Pound, shown as a little square structure, next to the brook (Cranleigh Waters) and south of the track that became Mead Road: this was a lock-up for any stray animals found wandering in the village. A brewery is marked next to the White Hart public house. This was Bruford’s Brewery that within the next few years moved to a more prominent site opposite the Obelisk. 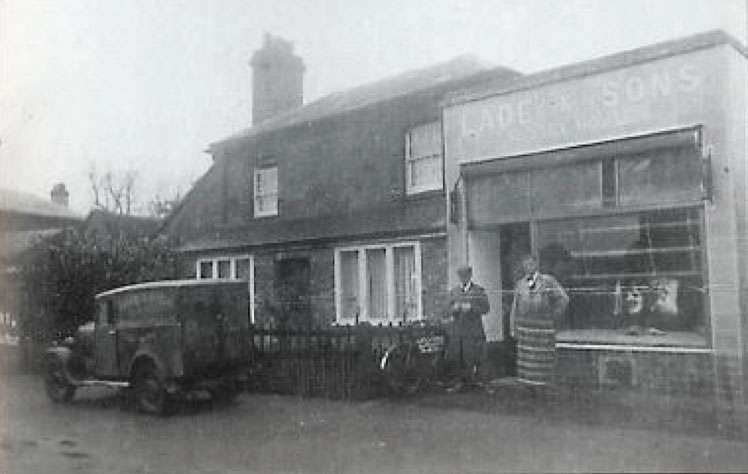 Bert Lade, on the right, who raised the alarm, outside his butcher’s shop in Ewhurst Road

The end came for Parsonage Farm in 1922, when a serious fire broke out. Mr Bert Lade, the butcher, was sitting in the office of his shop in Ewhurst Road on a Monday afternoon, when he noticed flames rising from a haystack across the road, and raised the alarm. The Cranleigh Fire Brigade was soon on the scene, taking their manual engine on to the lawn of ‘Dewlands’ in Dewlands Lane, so as to draw water from the large ornamental pond there. It was the largest fire in Cranleigh for some years, and the Guildford Fire Brigade was called also. The blaze soon spread to other haystacks, and was only 12 feet from engulfing two cottages (nos. 3-4 Lade’s Cottages). Walter Corin, the photographer who worked at ‘The Studio’ next to the Obelisk, was on hand to take dramatic photos of the fire at its height. Seven haystacks and some stables were destroyed before the fire was put out. 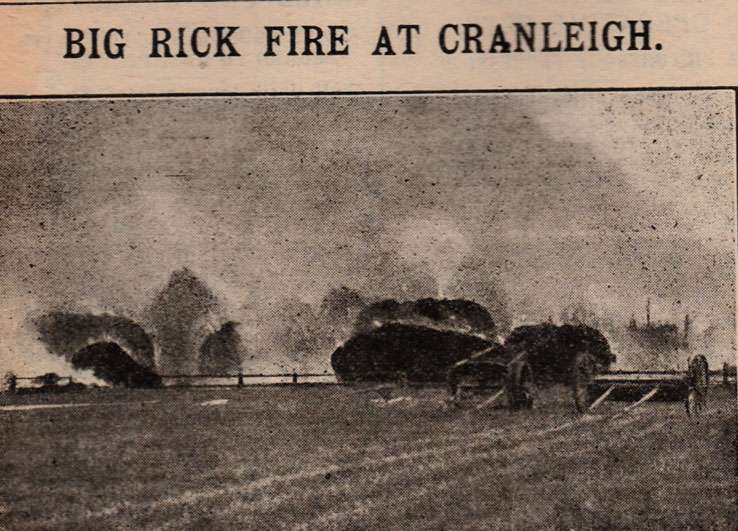 Mr A.B. Johnston, who had acquired this land and farmhouse, decided not to rebuild, but instead to develop some of the land as housing. Using the builders Auchterlonie and Reeves (whose manhole covers can still be spotted around Cranleigh), he built three houses, and named the road ‘St Nicolas Avenue’, after the church whose land it had been for centuries. 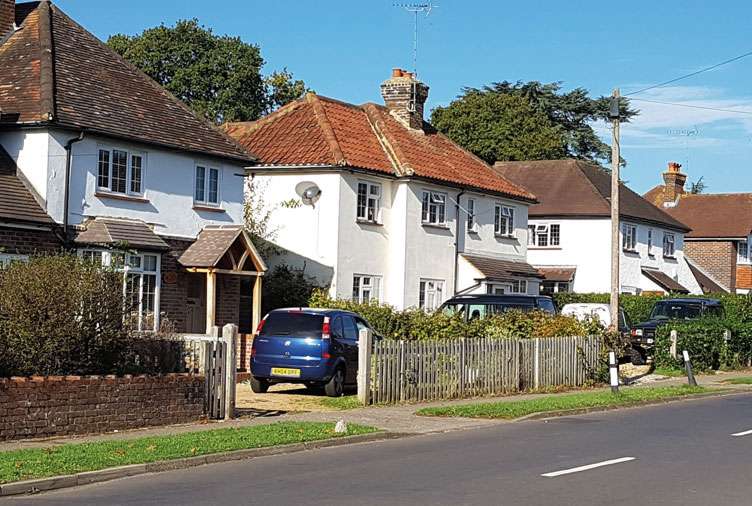 (Grateful thanks to Brian Cheesman for the loan of James Puttock’s ledger book; to Geoff and Jean Edwards for letting me see the deeds of their house; and to Mrs Catherine Ferrier for the newspaper accounts of the fire in the Frank Warren Papers.)

The Cranleigh History Society meets on the second Thursday of each month at 8.00pm in the Band Room. The next meeting however will be a tour of Cranleigh churchyard led by Michael Miller at 2.30pm on Thursday June 13th.