Have any of you noticed how clean the front of your car is nowadays?

Some 15 to 20 years ago there was a regular chore to complete after every significant journey.

Hot water, a bucket, soap and a brush were needed to scrape off a grim gallery of dead insects on the headlights, radiator grill, and number plate.

Front windscreens had to be cleaned even more regularly to remove the smears left by splattered butterflies, moths and bugs.

But now our vehicles stay largely splat-free and that is not just because of their more aerodynamic shapes. Older Land Rovers are as sleek as a brick, but they are experiencing the same phenomenon.

Industrial agriculture and insecticides have taken their toll. Flower-rich meadows, havens for pollinators such as bees and hoverflies, are disappearing. Other complex factors play their part too in the demise of a vast array of insects.

And that all contributes to the pressures facing a bird that comes to breed in our orchards, parks, gardens and wooden clearings. The Spotted Flycatcher. Or ‘Spot Fly’ as we birders refer to it. Best to be quick – by the time you say the five-syllable full name it might have flown off.

This sub-Saharan migrant is the latest to arrive back to us each year, checking in during the second or third week of May from its winter quarters in coastal West Africa. Bang on cue to benefit from the newly emerging meaty-winged morsels that are back on the menu.

It has come from as far away as Angola, the Congo Basin, Gambia and Nigeria. The earliest I have seen around Cranleigh and surrounding villages was on the 5th of May, back in 2003.

Slimmer than a similar-sized House Sparrow, this mostly greyish-brown bird with faintly streaked (hence ‘Spotted’) breast, silver-white belly, and black legs may not be the best looker. It is not a notable singer either, managing only a quiet, high pitched ‘see.’ 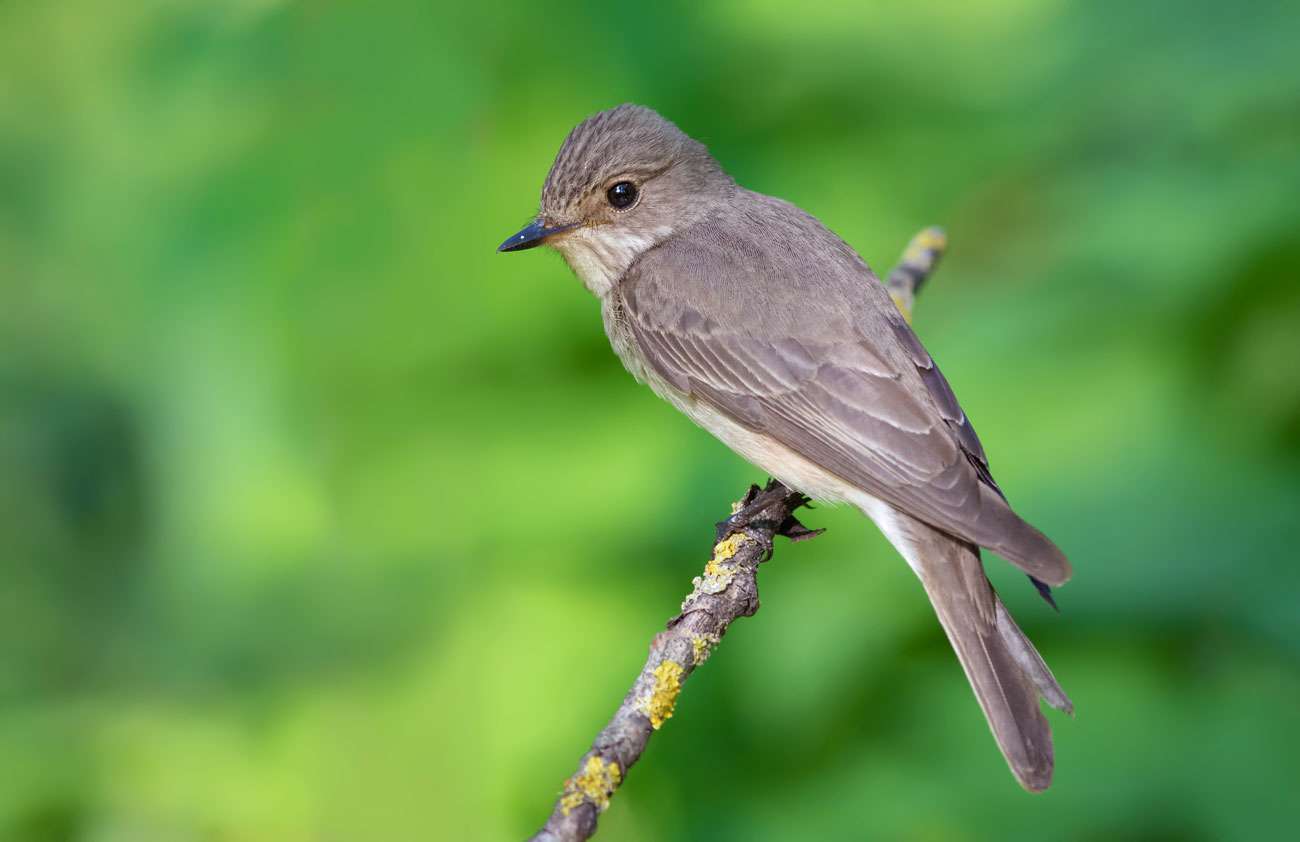 But its ‘armoury’ gives it plenty of character to make it a top performer. A relatively long tail, and wings, provide the power for dashing sorties from a prominent perch to snatch passing flies with its long thin bill. Get close enough and you can hear the ‘snap.’ Then it doubles back for a quick snack at its lookout post on a branch, wall, or fence post and awaits another unsuspecting passer-by.

Last year a pair bred within a short walk of the Cranleigh Magazine offices and it was a privilege to see them busily fly-catching to feed their youngsters.

Often this species will return to a nesting site in subsequent years, but they are getting spotted lesser and lesser. Now only very small numbers can be found in publicly accessible areas around Cranleigh and Ewhurst.

Suitable habitat exists in the gardens of large country houses in this part of the Surrey Hills where horse paddocks provide the food and the woodland clearings the Spotted Flycatcher craves.

Summer days past in the early years of this century revealed as many as three pairs within a few hundred yards of one another in Cranleigh. One was on patrol in Cranleigh High Street.

But these are regrettably just memories and early Autumn now seems to be the best time to find the Spotted Flycatcher. Family groups are then feeding fast to be fit for their night flight south. My latest sighting here was 27th September, so you have hopefully got more than another three months to find one.

We are not the only ones to witness this bird’s decline. As an official ‘red-listed’ species it has the highest conservation priority. Its numbers are down throughout its European range and there has been a national fall of 88% since 1970 including a 50% drop between 1995 and 2010.

You can try and do your bit to help if you have a big garden, stables, or farmland – or know someone who has. Invest in an open fronted nest box. Even if your target does not use it, another species might benefit.

Exactly why the Spotted Flycatcher is having such a hard time remains a puzzle. But, as the Surrey Bird Club chair Eric Soden has reported (Surrey Bird Atlas 2007-2012), this bird is one of several long-distance migrants wintering in West Africa’s humid zone that are showing a steep population decline.

This suggests the cause is to be found in their wintering grounds or on migration. It might not all be our fault.