Joy of Cranleigh – The Vanished Buildings – May 2019

For 75 years, almost every picture postcard of Cranleigh Common included a view of the large church of St Andrew, yet now its existence is almost entirely forgotten. 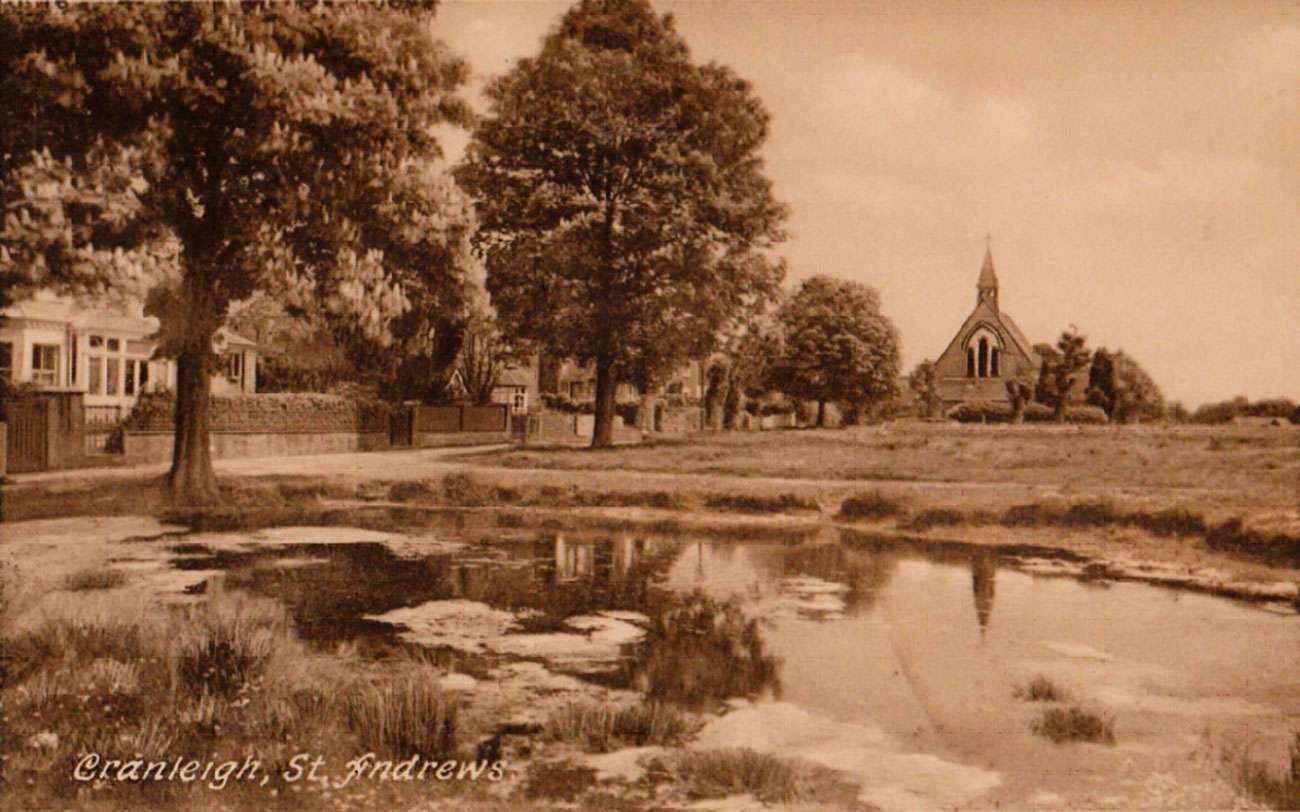 The clergy and parishioners of St Nicolas church decided in 1897 that a new church building was needed for the west end of Cranleigh village, because of ‘the rapid rise in population’. This was certainly true. Cranleigh had 1,090 people in 1801 and would rise to 2,752 in 1901. Parkgate Cottages and many houses in Elmbridge Road had recently been built in west Cranleigh, besides buildings associated with Cranleigh School. 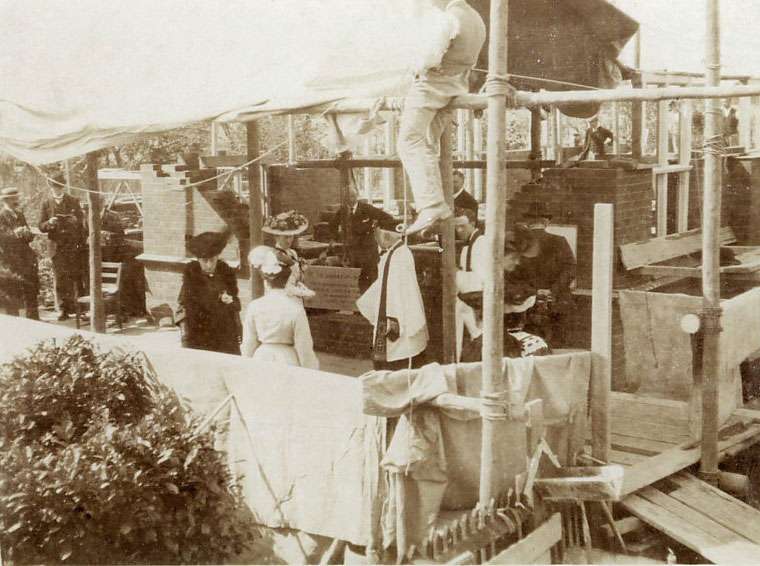 By April 1898, the fund for a new church building had reached £1,980, and the plans by Edward Lunn, architect, and the tender of Messrs Mitchell Bros of Shalford were accepted. In June the foundation stone was laid by Lord Ashcombe, with a great gathering of local clergy and people, the ladies wearing their best and most elaborate hats. According to the foundation stone, the building was ‘a thank-offering to Almighty God for the blessings of Queen Victoria’s reign, 1837-97’. 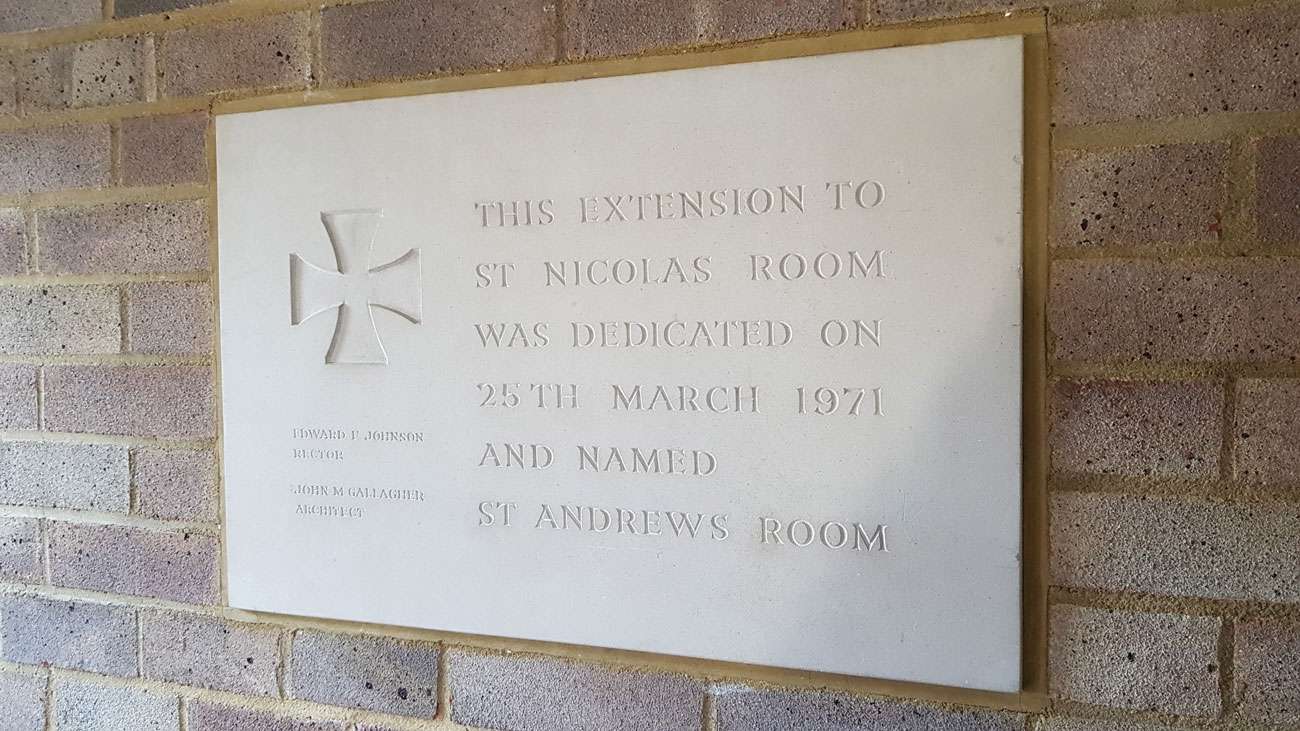 The plaque outside St Andrew’s Room

The building was completed by April 1899, when it was dedicated by the bishop of Winchester. The building was in Gothic style, faced in hand-made red bricks produced locally at the Hazelwood Brickworks. Later a church room was added for mid-week activities, and an organ was installed in 1910. The assistant curate of St Nicolas was responsible for conducting services, with occasional help from the chaplain of Cranleigh School. The St Andrew’s cricket club originated here. The bakery next door to the church became known as ‘St Andrew’s Bakery’. 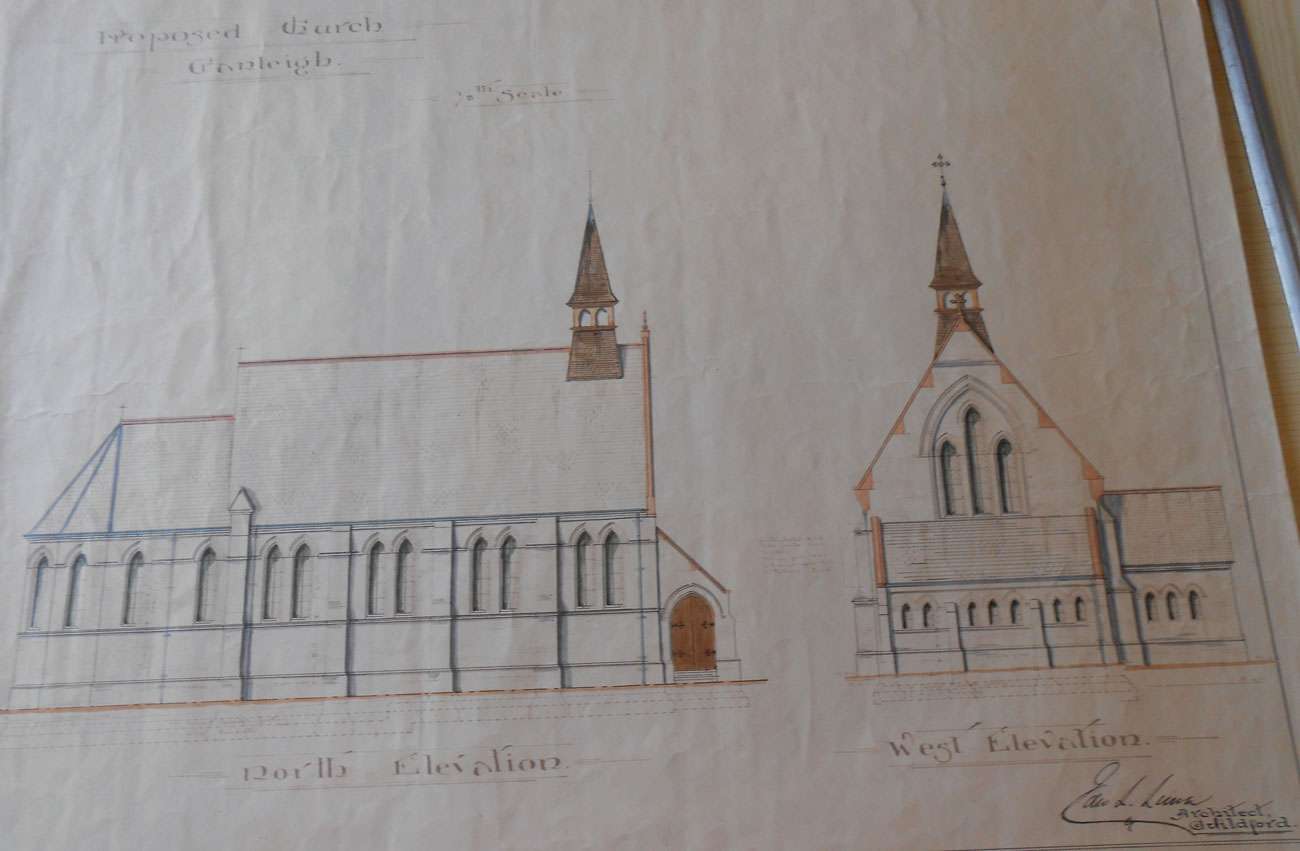 Plans for the new church by Edward Lunn, architect

When Essex schoolboys lived at Elmbridge School, from 1940 onwards, they regularly attended here, walking in file along Elmbridge Road. There was a full range of services and activities for all ages, and in 1940 the church became financially independent of the mother church, St Nicolas. However, expensive repairs to the fabric were required after the Second World War, so, despite the fact that about 60 people were attending services regularly, the decision was taken in 1964 to cease holding services. 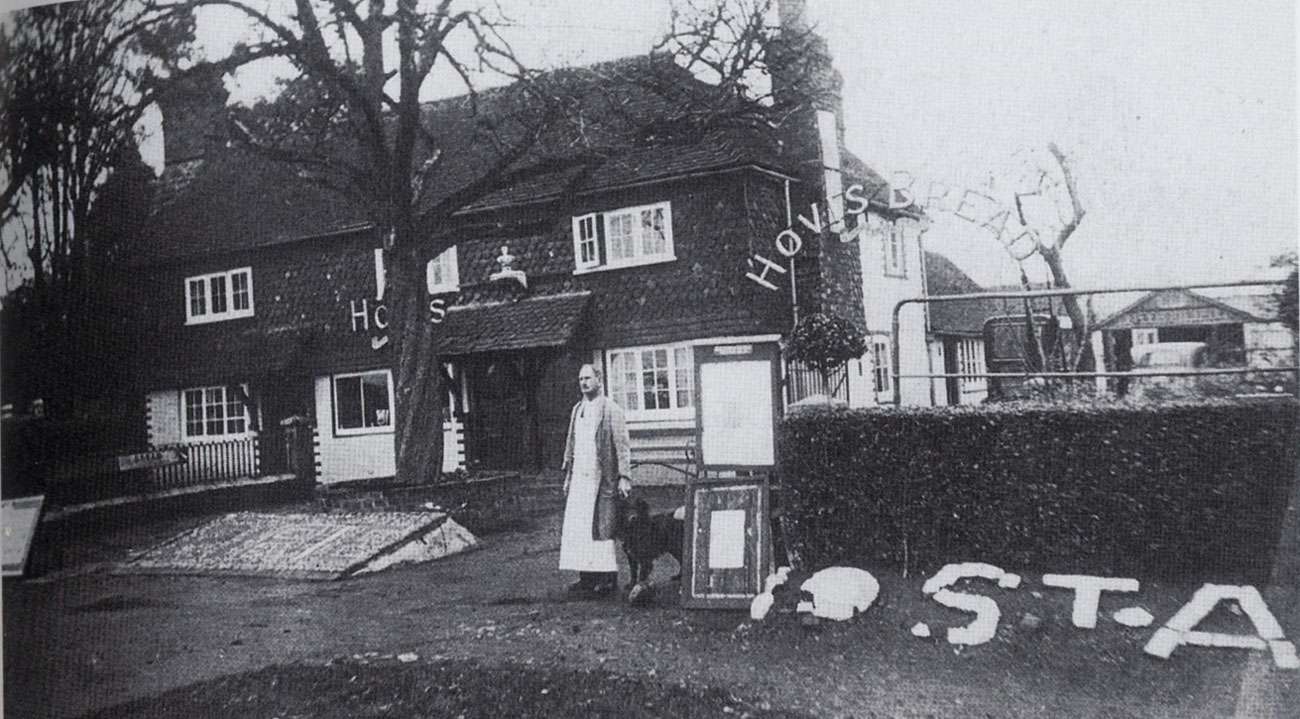 It was discovered that because the building had been ‘dedicated’ and not consecrated, there was no need for it to be deconsecrated. So it was sold to Hambledon Rural District Council, who eventually demolished it in 1975. The organ was given to All Saints church, Kampala, Uganda and the church bell sent to a church in the Gilbert and Ellice Islands in the South Pacific (now called Kiribati and Tuvalu). Flats for senior citizens were built on the site.

A bus was laid on to bring West Cranleigh people to St Nicolas church on Sunday evenings. When a second church room was built at the main site in 1971, it was named in memory of St Andrew’s church. The very active ‘St Andrew’s Adult Club’ met in this room every Tuesday evening until 1999. They went carol-singing at Christmas around the Common and Guildford Road. Every Easter they supplied the lilies for the church display and ran the grocery stall at the Rectory Fête. 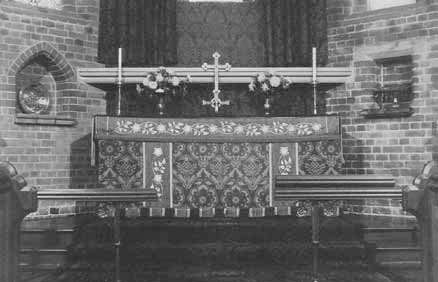 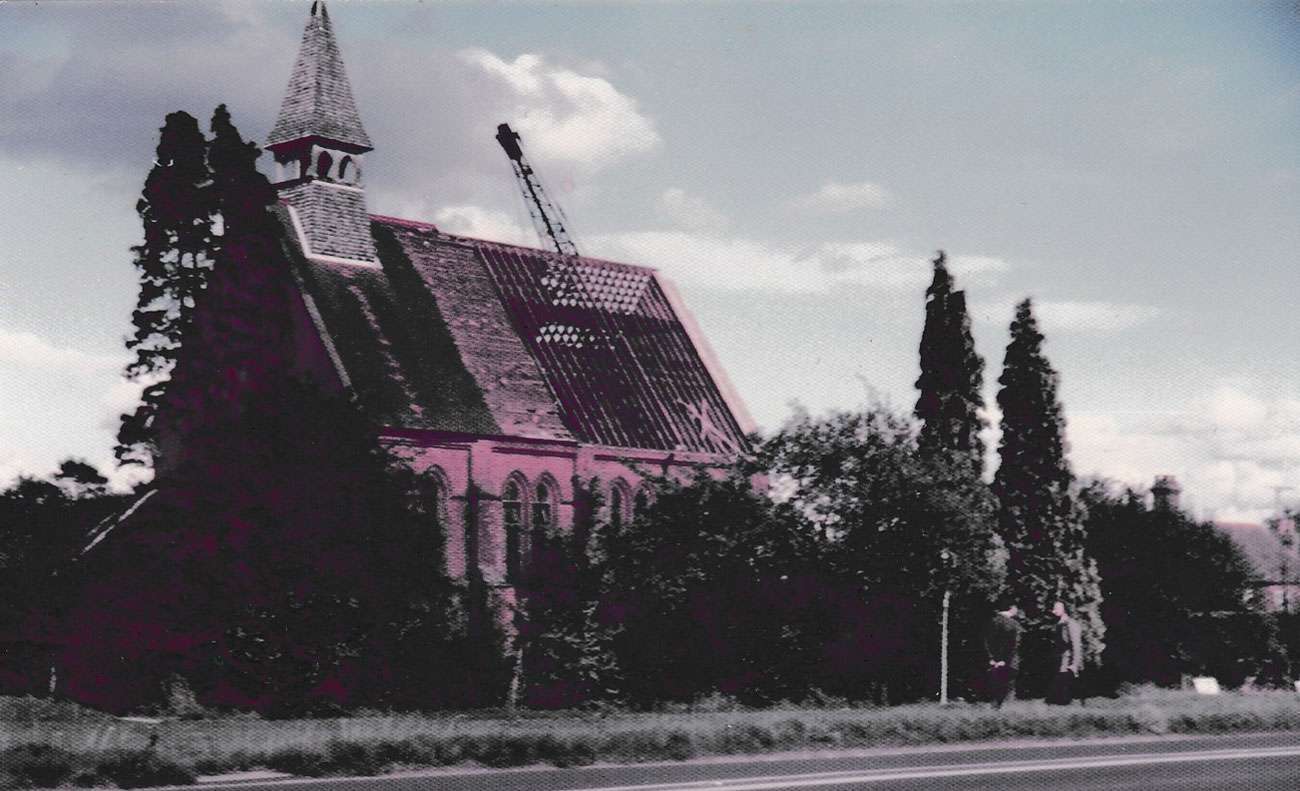 (Grateful thanks to Brian Bagot for information and advice.)

The Cranleigh History Society meets on the second Thursday of each month at 8.00pm in the Band Room. The next meeting will be on Thursday May 9th, when Katherine Stearn will speak on ‘The Life and Times of William Cobbett’.

Back Blindsided by a Cancer Diagnosis?
Next Crane Spotter – May 2019 – Birds of the Cranleigh Underground
Related Articles
1 Comment