Home » Local Cranleigh » Joy Of Cranleigh – What was happening in Cranleigh in September 1916?
0

Joy Of Cranleigh – What was happening in Cranleigh in September 1916?

The annual  report of the Village Hospital came out at the end of September. During the previous year, 98 patients had been treated and 45 operations performed, with an average stay of 13.6 days.

One of the hospital’s medical staff, Dr Alexander Hope  Walker, was away  serving with the Royal  Army Medical Corps. We know from the 1911 Census that he  was  45 then,  so  he  was  particularly  patriotic  to volunteer  for active service in his fifties. The picture shows him under  the ‘Cranleigh Oak’  on the Common, with a group  of  recovering patients from the Oaklands Military Hospital, in their distinctive blue- and-red uniform, known as the ‘Blighty  Blues’. This is presumably after Dr Walker’s return to Cranleigh in 1917. Dr Walker’s house was  ‘East  Gables’ on the Common, which  is the left-hand  two-thirds  of what is now Maple Tree House and Kelsham Dental Care.

Doctors or dentists who joined the RAMC  received a commission, and  were  in charge of 80-100 men. Cranleigh man  Rennie Crick, of  the  Northampton Boot  Store  here, was  one  of  those  in the ranks  of the RAMC. After service with the 34th Field  Ambu- lance in Gallipoli and Egypt, as par t of the 11th Division,  he was  brought  to the Western  Front in July 1916.

What struck  him on arrival from Egypt was  first the rain, and  second the large number  of  aeroplanes, both Allied and German. The 11th Division took over part of the front in the 3rd Army sector, and  as the Battle of  the  Somme  continued they  were  in the thick of the action.

On September 14th Rennie wrote in his  diary, ‘the 11th Division  charged the Germans at 6 pm and  I was  working  all night taking  in casualties’. He  took in 278 on the first night. It sounds as though he was working  in an  Advanced Dressing Station,  where wounded men were  received, patched up and  if necessary passed further back from the front line to a Main Dressing Station or even a Base Hospital. 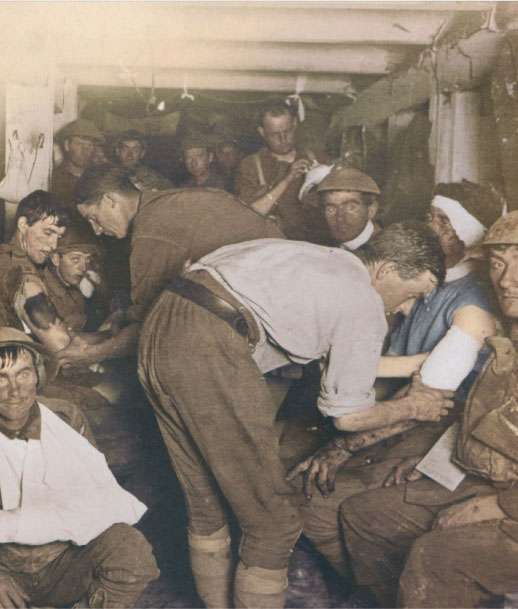