For the first twelve years of my life, I lived with my family in South West London, after this time we moved to Surrey. Some of the highlights of my early years, were when my father drove us to the countryside in his car. He encouraged me to stop, look and appreciate the countryside around me and the beauty of nature and God’s creation.

Although a Londoner by birth, he was a countryman at heart. Since then the appreciation of all I see around me in nature, has never left me. In particular, I grew up with a strong love of all animals, so I feel very fortunate that life led me into an occupation which involves living and working with them. 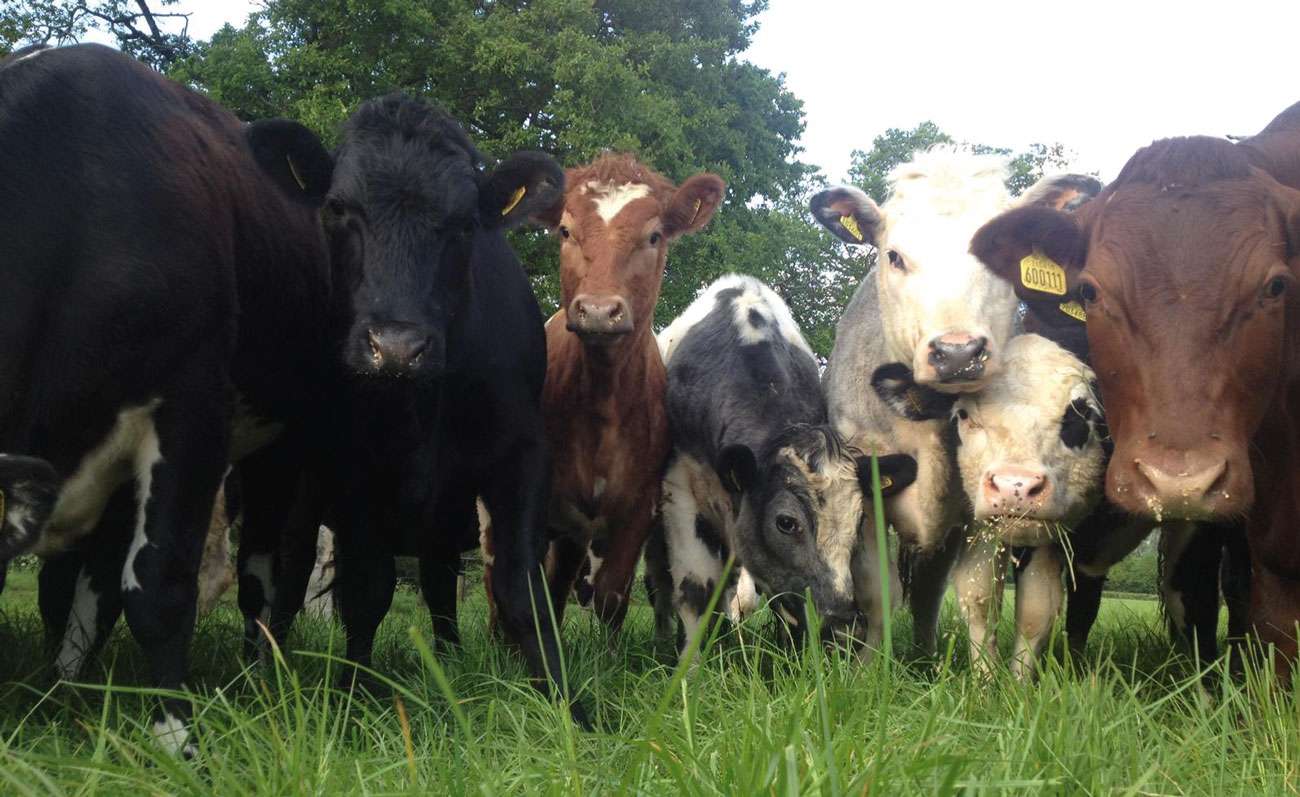 A herd of our cattle coming up to check me out

I left school in 1962 at the age of sixteen with no real clue what I wanted to do. I ended up taking a secretarial course, which led to a job in a builder’s office where I gained experience in general office duties. However, I always found the outdoors to be a great distraction and loved the freedom of being outside. I later left and moved to a large office in Reigate where I stayed until I married and moved away.

I was eighteen when I first met David, my ‘husband to be’. He was a farmer. He worked with his father and brother on a farm at Sutton Green, near Guildford, which was owned then by Paul Getty. They milked a dairy herd of cows and farmed store cattle and sheep. Through spending time with David and his family on the farm, I was introduced to a very different way of life to the one I knew and I loved it. 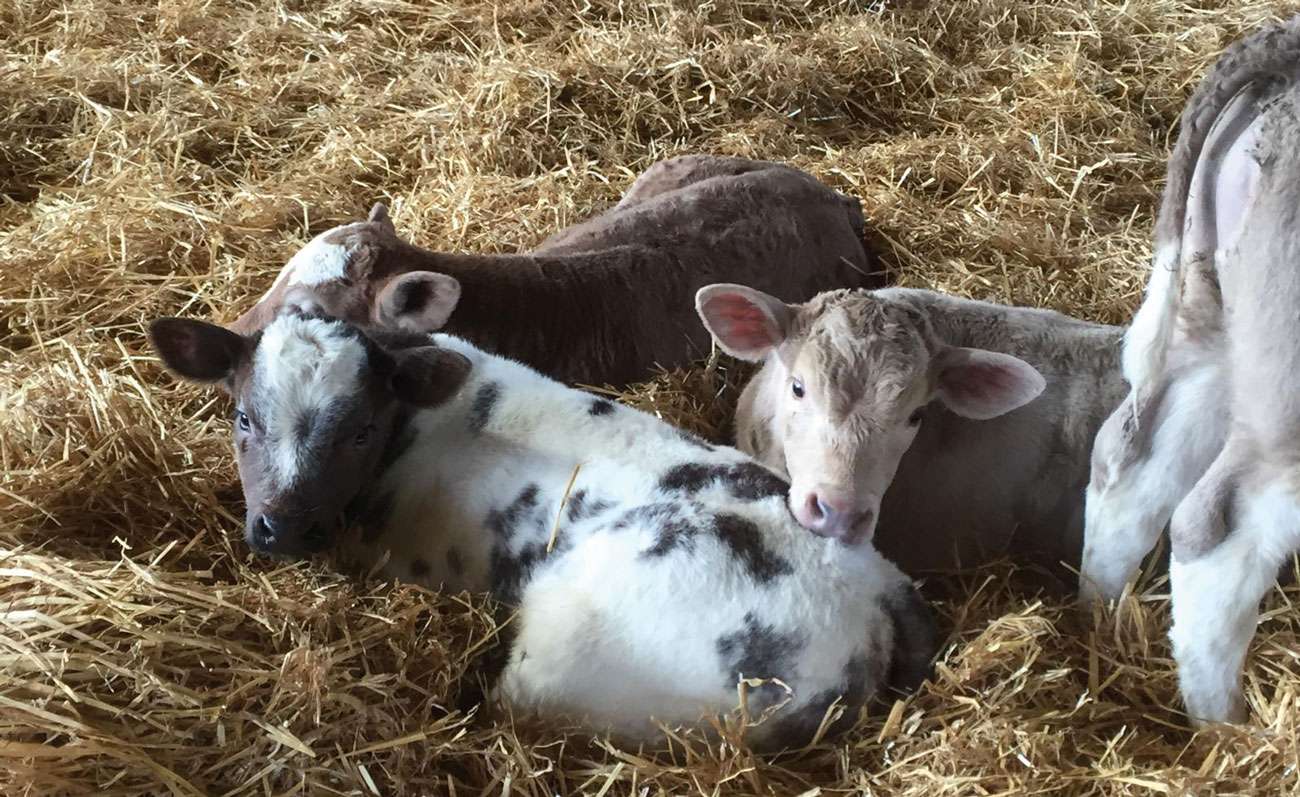 Young calves born on the farm

However, I quickly realised that it was not an easy way of life. Farming involves long hours and hard work and alongside David’s family this was very evident. But I could see the rewards as well – new birth all around in the spring, with new lambs and calves, the joy and freedom of being outside in the fields taking part in all that needed to be done. I was always happy to help out in any way I could and would often astonish my office friends on a Monday morning when asked what I’d been up to at the weekend, with tales of farm life!

Later that year we became engaged and married one year later. I can remember the day after I got back from my honeymoon, waking up with the realisation that I had jumped into farming life at the deep end and feeling that my life would quite possibly never be the same again. 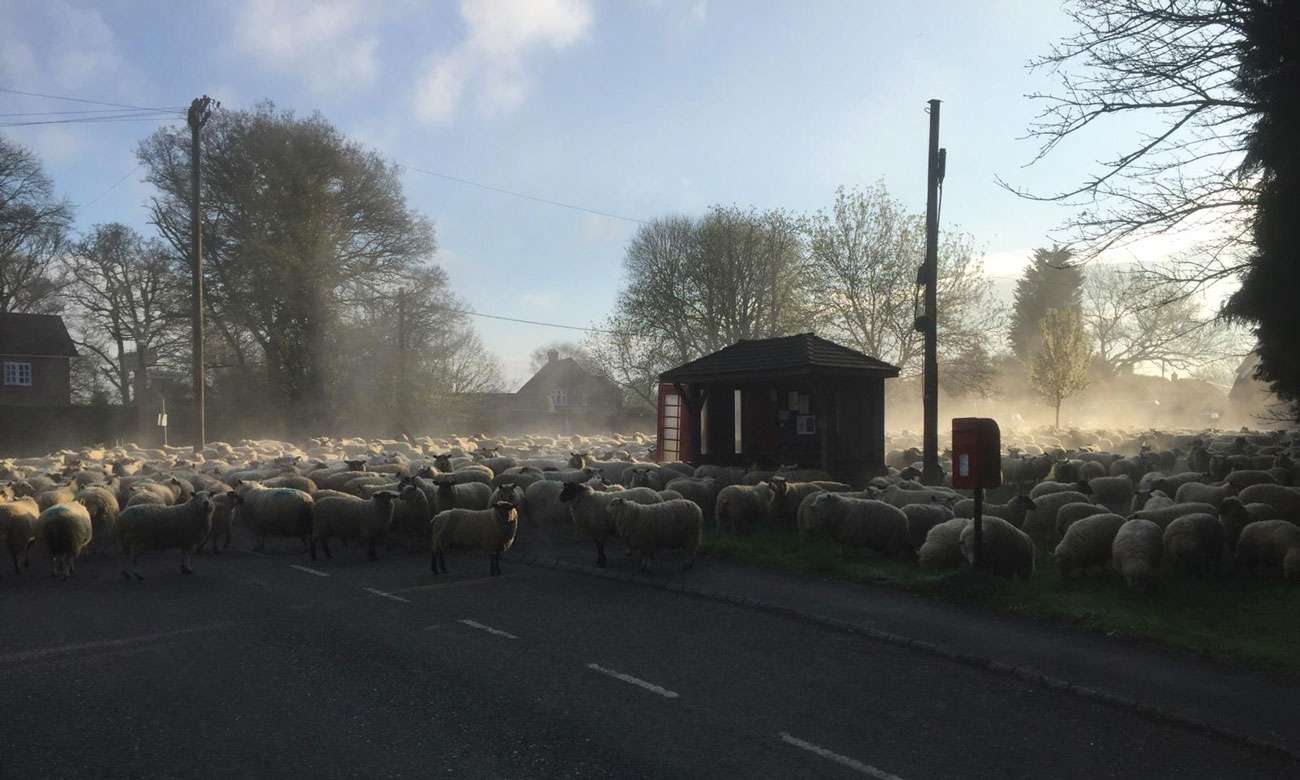 Sometimes things can get out of hand – traffic wise – when there’s a queue for the telephone. During winter months we farm storelambs, which are sold in the Spring. Occasionally we move them from one field to another along the roadway.

Time passed and we took on the tenancy of a farm in Egham, Surrey. We lived in an old Victorian farmhouse with many rooms. It was draughty and cold in the winter, with no central heating. That was when the hard work really began. We started with a small herd of dairy cows and some sheep. Over time the farmland was improved and the livestock numbers grown. On top of milking the cows twice a day, David carried out agricultural contract work as well! He was a very hard-working man, in fact some might say a work-acholic. He was always very ambitious for the future and the future of his family.

“they say the grass is always greener on the other side”

I would feed the cattle, look after sheep and the farm while he was away. It was tough, especially during the winter months, but I enjoyed it. The springtime was always so welcome when it eventually came. I always looked forward to the time when the weather would begin to change and all of nature would start to spring into new life. We stayed on the farm in Egham for sixteen years, but the insecurity of renting a farm year to year on a contract basis eventually got too much. In the early eighties we decided to make the move to a larger farm of our own near Cranleigh on the Surrey/Sussex border. By that time, we had actually converted over to beef farming. 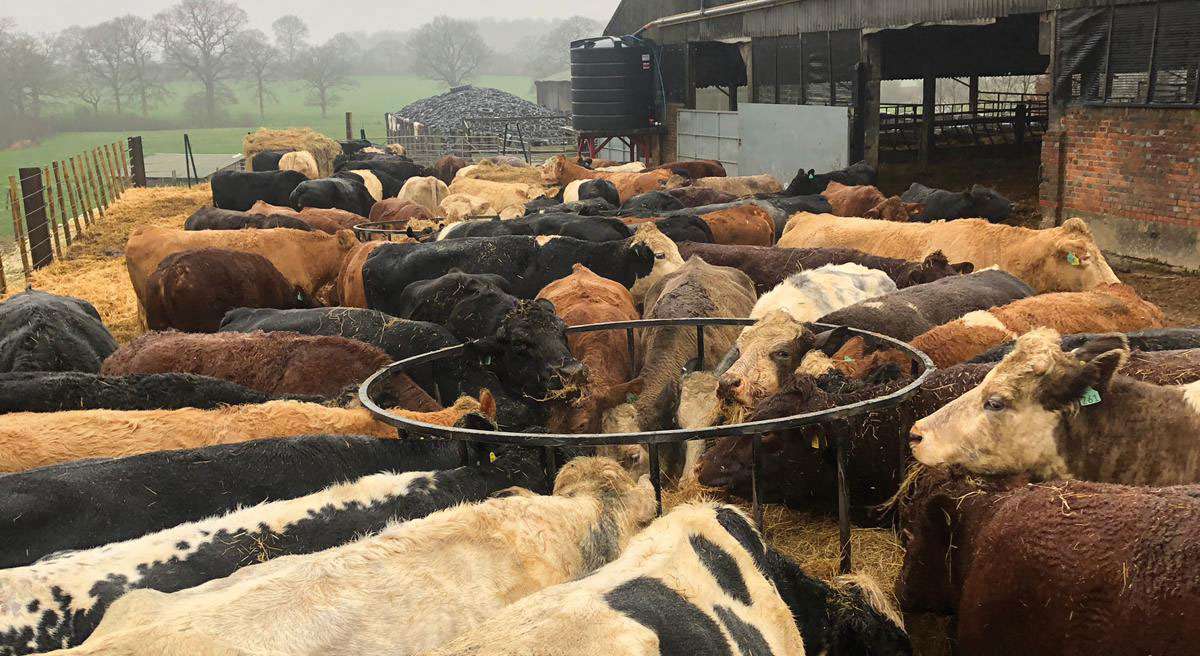 There is always work to be done on the farm

Over the years we were blessed with four children, a daughter and three sons. Juggling home life with the farm was often challenging but always greatly fulfilling.

The children were able to grow up enjoying the space and freedom that farm life offered. They were often out in the hayfields or in the cowshed in their pushchairs. We involved them in farm life from a very early age, and they were always with us, helping with what we were doing in whatever way they could.

Though the days were long, farming life meant that I was always there when my children got home from school, I longed for the school holidays when I could have them at home with me all the time. The children grew up to love and enjoy farming just as much as I have over the years, and now they’re all farmers in their own right, with their own farms and families. 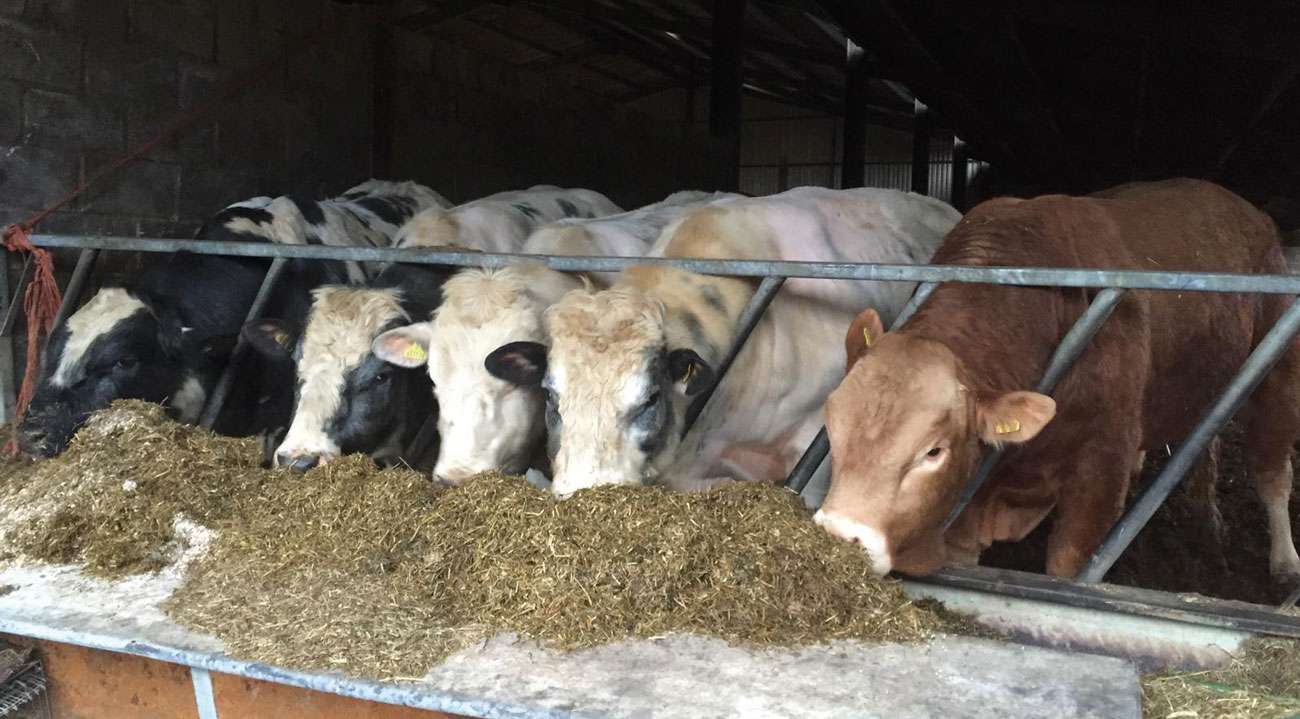 Cattle are fed from our own home-grown crops

Sadly, in 2010 after a four-year illness my husband David passed away, leaving a huge hole in all of our lives. But I have found comfort in the farm and watching the many grandchildren I’ve been blessed with, growing up.

These days it can be disturbing to see how detached people are from where their food comes from There’s been a great deal of bad publicity around factory farming and cattle that are housed in poor conditions their whole lives. However, a lot of people are also unaware of how farms such as ours are run. Providing a natural environment with grain, silage and hay that’s all home-grown on site. 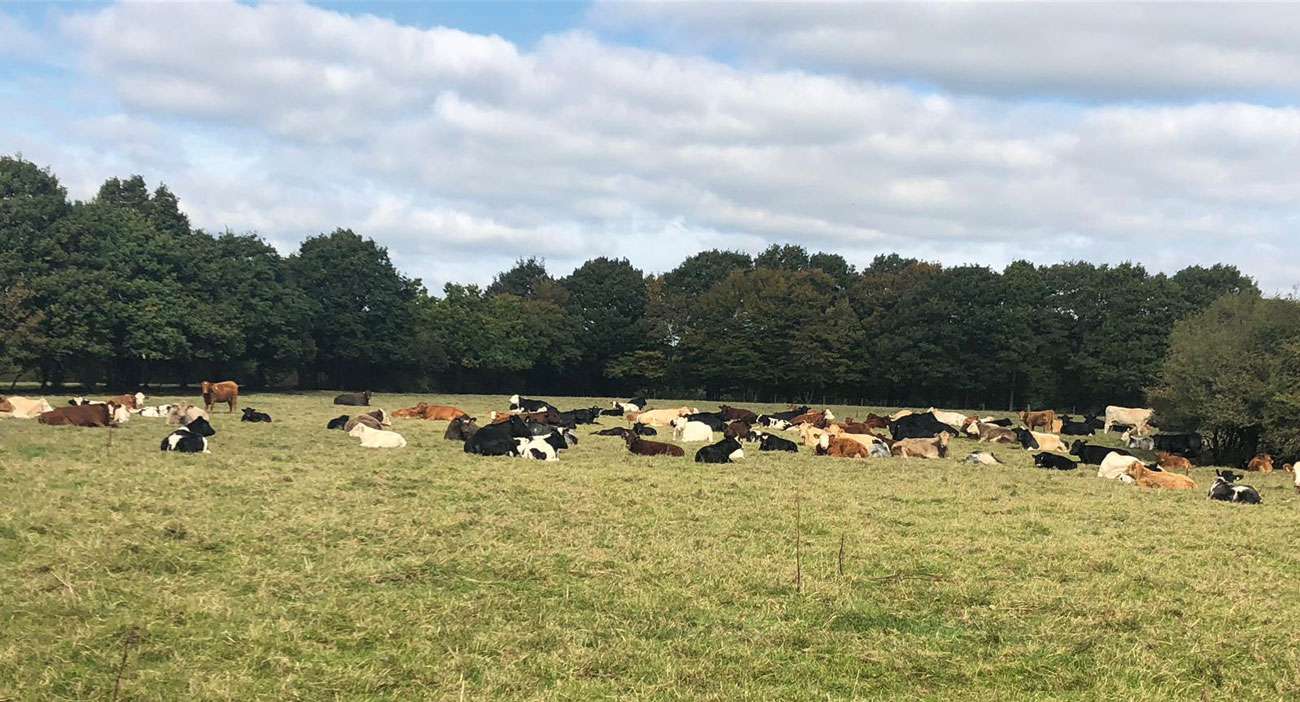 I really believe education is key and that more children should be taken to farms to experience the environment, learn about how they are run and where their food comes from. Over the past years we’ve hosted ‘day trips’ for classes of school children from inner city London and I’ve been astonished by some of the questions they’ve asked and shocked at some of the things they’re ignorant about. It’s very saddening to see lives being lived more and more remotely away from nature.

Farming life has changed dramatically over the years, becoming much more mechanised with larger and more efficient machinery. There are not so many successful small farms in this country now. The majority are subsidised in some way or incorporated into bigger farms where a larger amount of mechanisation is available, helping to keep labour costs to a minimum. 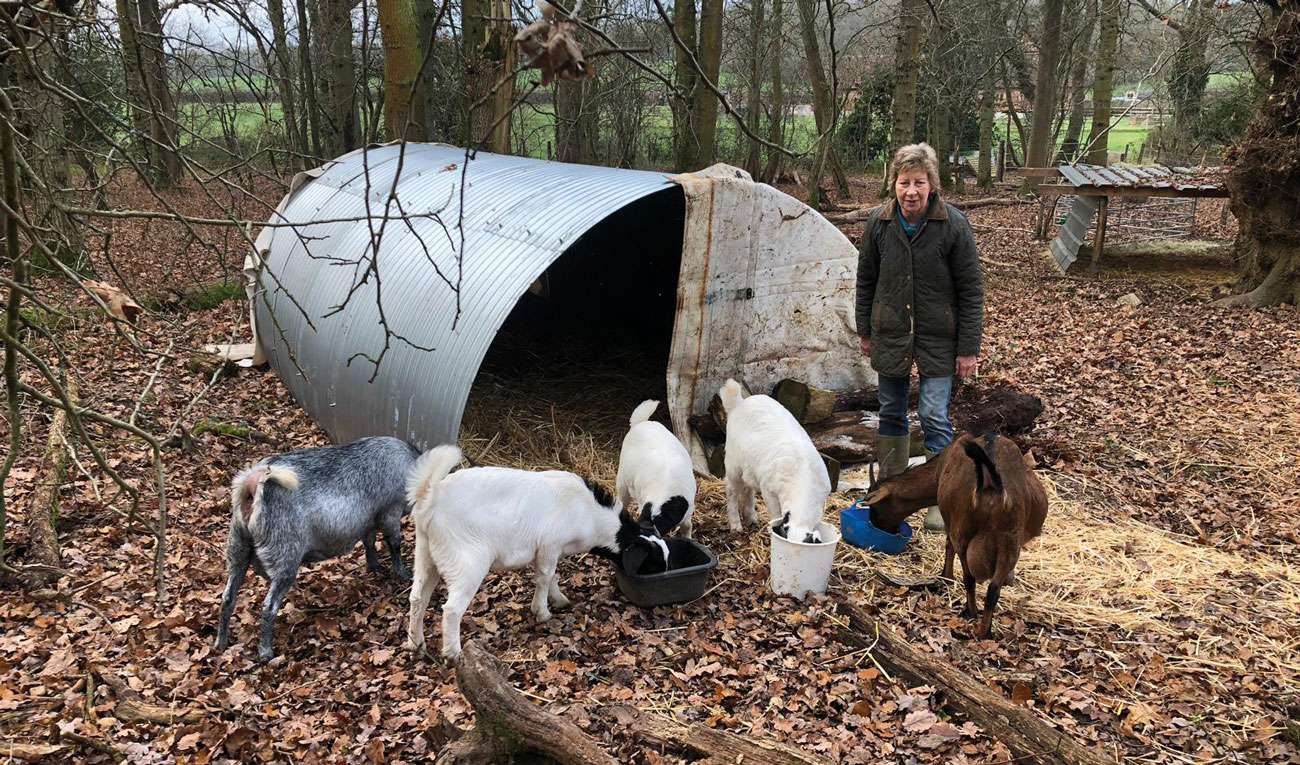 We now have a mixed herd of 100 breeding cows and continental bulls on our farm today, and as we come into March time, I’m as excited as ever with the promise of Spring and all that the new season has to offer. Wild flowers are beginning to bloom, and calving season is almost upon us.

We always keep our calves until they’re around two to two and half years old when they are mature animals. They have a very happy life with us on the farm from beginning to end, grazing in the summer and housed comfortably in the winter.

Every new birth is a joy and a miracle to me and something I feel so grateful to be a part of.