Remember the famous cinema quote from Tom Hanks, playing the Forrest Gump character in the film of the same name? ‘Momma always said life is like a box of chocolates. You never know what you’re gonna get’.

I always recall those words when I hear or see an increasingly scarce visitor to Surrey Hills’ heathlands and forests.

Thanks though to the greater availability of one of its favourite foods you probably stand a better chance of seeing one in your garden than did the last generation of bird watchers.

Look again at your feathered friends battling the freeze around your feeders. Closer inspection may reveal a sweet surprise.

If you see some apparently brownish little birds, about the size of a Goldfinch, do try and study them a bit longer.

That’s often not easy when there is a continual flurry of comings and goings, but you may be rewarded with good views of Redpolls.

They just love those oil-rich tiny black seeds in your niger feeders and will often punch well above their weight to be in pole position at the holes.

Add to the avian mix those squabbling Siskins, grappling Goldfinches, and the resident ruffled House Sparrows – all trying to feed from the same outlets – and there is only one way to find out who is toughest. As comedian Harry Hill would say: ‘Fight!’

The Redpolls can be feisty and will guard their turn at the feeders with much snarling aggression and pecking gestures towards rivals. And who can blame them – they have come many miles to try and survive the winter with us.

Our birds may be visitors from Northumberland, Wales, Scotland, or Scandinavian countries. This year they arrived in my garden on a record early date in January. Last year it was February but the year before there were none. You just never know what you are going to get from one season to the next. 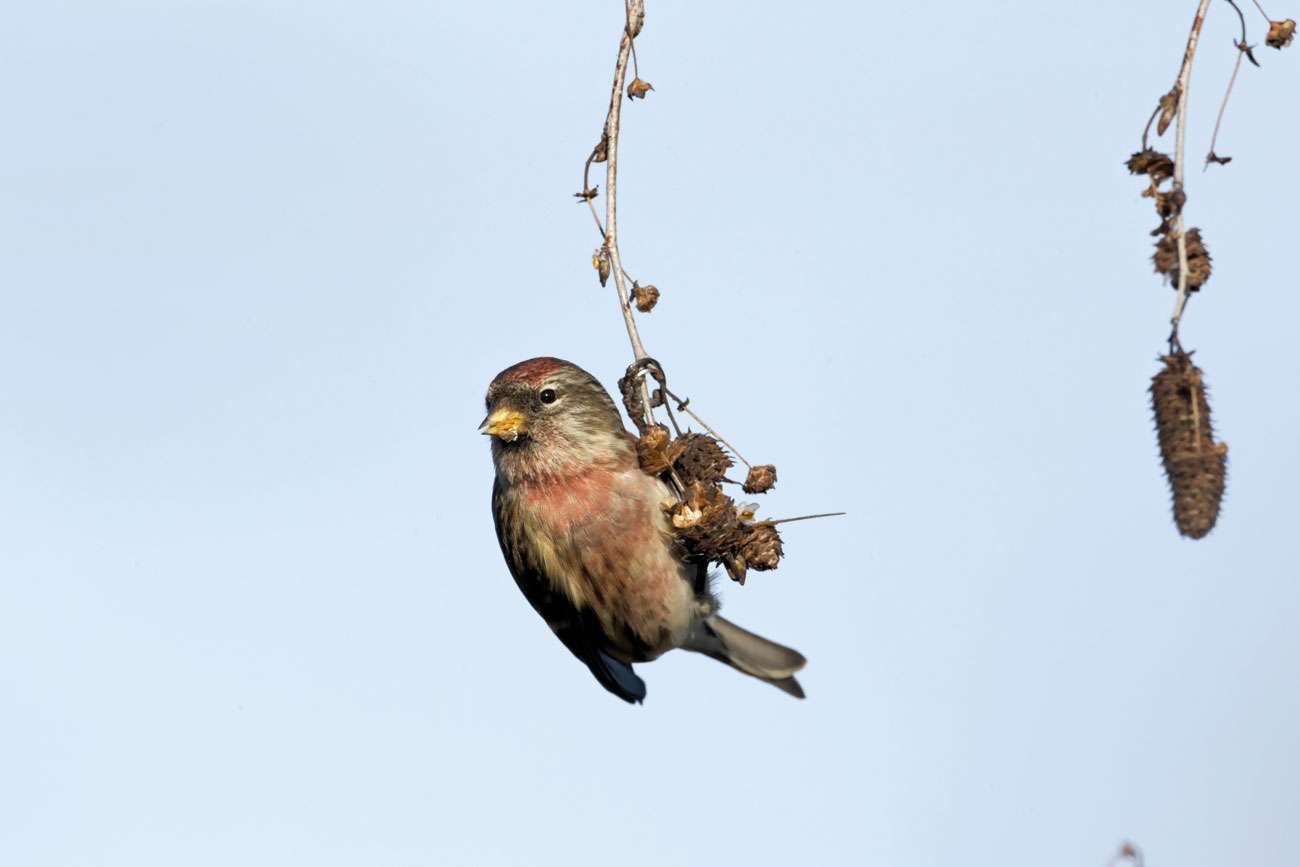 Plumages of the Lesser Redpoll, to give them their full name, vary considerably. There are rare bigger and whiter Arctic versions too.

The ones we see have proportionately long, notched tails with a small yellowish bill and dark bib. The detail depends on age, sex and the time of year.

Females and juveniles can be drab, featuring milk and dark chocolate coloured streaks over the head and down the back. Adult females have a small red ‘poll’ on the forehead, and, like the males, they have two pale wing bars and white bellies with brown streaking.

But the males can really turn it on with a much bigger and stronger red ‘poll’ and dazzling pinkie/red extending all down the breast, below the eye, and on the rump. One observer got it just right when he said these varieties looked as if they had dipped themselves in a jar of raspberry jam.

Redpolls show up around the Surrey Hills from October although they have been recorded from the second week of September. Usually they have migrated north by April to breed in wild areas of young conifers or birch forest.

Away from garden feeding stations you can find them munching quietly – often upside down – in alder trees beside the Wey and Arun Canal, or in roadside birch trees.

Usually I hear them first because their call as they flick by overhead, in a somewhat flimsy and bounding flight, resembles a little metallic motor – chi-chi, chi-chi, chi-chi.

In some recent years there have been local flocks of over 100 in good habitat, such as Leith Hill, but in others a flock of 20 might be notable.

They once bred, rarely, in Surrey but in less than an average human lifetime they have gone from reasonably common status to one of bitter decline.
It sadly appears there is no evidence they have bred in the county since the 1990s and they are now on the official red-list of species of national conservation concern.

The Redpoll’s ‘chocolate box’ looks like it is fast heading towards empty. We can only hope there is another tier.