Me and my twins, Amelia and Billie

I was born in Harrow, Middlesex, where I lived with my husband and 3 children, 2 girls and a boy. After I separated from my husband I moved to Horsham initially, for a new start. I then lived in Billingshurst for 10 years where I had twin girls. While living there I started my care business. At that time a lot of the clients were in Cranleigh which is where I met Phil, my present partner who is Cranleigh born and bred. In my business I was a registered care provider in the area, predominantly providing private care for clients that were prepared to pay for it themselves. I had a small team and offered a lovely 1-to-1 service. My eldest daughter Stacey worked alongside me virtually from day one.

Stacey had previously done some training in a care home. I had a 10 year previous history of working in care myself and so I started the business. She came and worked with me and it just grew to a team of about 10 but still maintained our aim of ‘1 on 1’ care. One of the local doctor’s surgery always referred patients to us. I was definitely their first care provider. I then became a trainer in palliative care so I could train my staff in palliative care and we started providing care to NHS patients for palliative, end of life care. 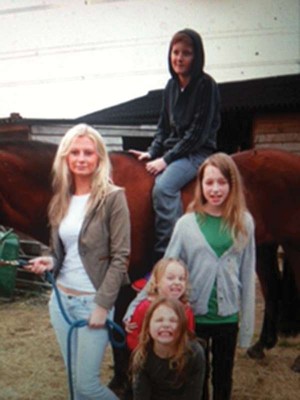 All my children, left to right, Stacey, Piers, the twins – Billie Mae, Amelia and Karis

Stacey and I worked well together in the business. She had a caring nature. She was very calm and level-headed. I’m more highly strung. She was quiet though always smiley and very reliable, punctual and everyone liked her. She knew how to keep her work at work and home at home. She was good at what she did whereas I struggle with shutting off. I can be a workaholic. Then one day everything changed. Stacey had just had a baby and was breast feeding. At first she found a lump under her arm. Because of the breast feeding we just thought it was mastitis. Then 2 days later she noticed another lump on the top of her head so I took her to the GP. The doctor thought it was mastitis too and didn’t make a fuss, said there was no real rush to investigate. But he did get the lump under her arm checked and it turned out to be a melanoma, skin cancer. They were going to give her surgery to take all the nodes away but after a CT scan they realized the cancer was stage 4 which meant it was terminal and she had 6 months to live. Stacey was just 28 years old. She was a mother to a 2 year old child and a 12 week old baby.

Throughout her illness she was very positive. She decided to become a vegan and started a chemo trial which we knew would never cure it but we thought it might give her more time. It must have been horrible for her. It was horrible for both of us. All the things we’d been doing for our clients at work were happening to her. 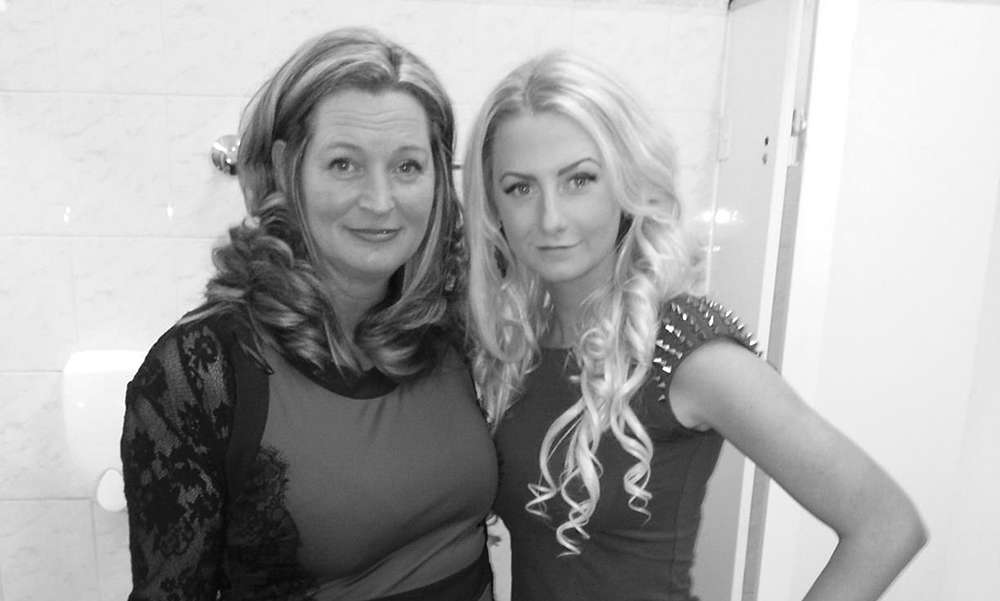 Me and Stacey, my eldest daughter

I found it difficult to cope. Thankfully I was helped massively, by a very good friend of mine – Dean who was my next door neighbour at the time. He was there for me 24/7. He had some understanding because he was an amputee himself, he was an amazing friend. I spent a lot of my time crying with him, but every time I went to see Stacey I put on a brave face, trying to be practical and encouraging. Unfortunately I had to wind down the business. I stopped working so many hours and didn’t take on any more new clients. I rented a bigger house so we could all spend Christmas together – there were 15 of us for Christmas dinner that year – 2015. We had a big family Christmas and we were all being positive. Unfortunately, the cancer had spread rapidly and her condition deteriorated. The consultant took me aside telling me she had just weeks to live. Stacey was a beautiful stunning girl. She wanted to get married so we needed to get on and do it. I then had to be positive and say ‘Let’s plan your wedding darling!’

I got going and managed to organize a big white wedding within 10 days. I had a lot of help from the community, mostly Horsham based people because she lived in Partridge Green. People donated all manner of things. I created a Just Giving page. Loads of people helped. We had cars and flowers donated. I bought her dress and the bridesmaids dresses. The Just Giving page raised £8000 so that paid for her wedding and subsequently her funeral. She was married 4 weeks before she died. I was emotionally and financially completely broken, totally. Although all Stacey’s care was free I hadn’t been able to focus on work though I tried to keep the business running. I gave all my clients to other care companies to be with her as much as I could. 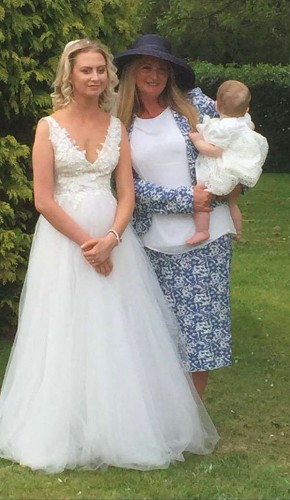 Me and Stacey at her wedding

I spent every day and every other night with her. It was very draining even though the hospice did all her care. The driving to and fro took its toll though you don’t think about it at the time. It was incredibly hard and I wasn’t coping well either. I felt terribly lonely and finances were an added burden. I had gone from having silly amounts of money to nothing. I took another 9 months off work. I didn’t work at all at that time. I just muddled through with the support of my partner Phil. We lost the house straightaway. It was only rented but it had to go. I was lucky I had a caravan down on Hayling Island so I went to stay there which was a lot cheaper than renting a house.

We stayed there for months and then once I was strong enough to come back to work I took on a couple of clients back up here so we were commuting. It wasn’t too bad coming up the A3 from Hayling Island. It sounds a long way but we would drive up very early and return very late. The journey took about 45 minutes. Hayling Island is a lovely place to live but we realized it just wasn’t practical for us by then. 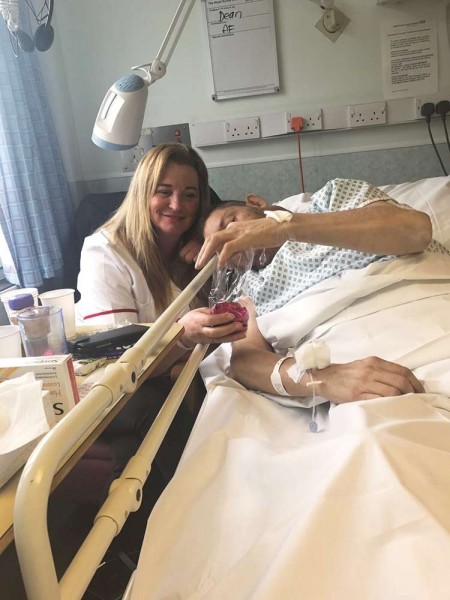 Visiting my neighbour Dean, in hospital

Through Facebook I took on a couple of clients and started rebuilding the business. Obviously I had a good reputation. I am now at a stage where I have 4 clients, working just by myself. I don’t specialize in personal care or palliative care anymore. I just look after people, keep them running on a daily basis, for up to 3 hours a day for each client. I provide meals for all my clients now which are home cooked, hot meals. I’ve also just started pet therapy. So I’m doing care but in a slightly more alternative way so it doesn’t take up my whole life. I have a bit more free time to share with my family and I’m doing something I enjoy more rather than going back fully into the whole caring, hands-on, end of life work. It’s a gentle way back in to earning some money. I’ve always been a workaholic so I need to work just to keep myself functioning. Things are going well and hopefully after Christmas I plan to re-register the company and take on some staff again.

Before then though I am off to Australia for 2½ months. I made a friend over there who’s son died at the same age as Stacey. We met through a grieving mother’s site so I’m going to spend a couple of months with her as part of the healing process. As well as losing Stacey there was a big family breakdown after her death. I was a palliative trainer myself but I didn’t realise when she was dying what else was going on around me. I now see that much clearer. When people die it can bring the best out in someone. 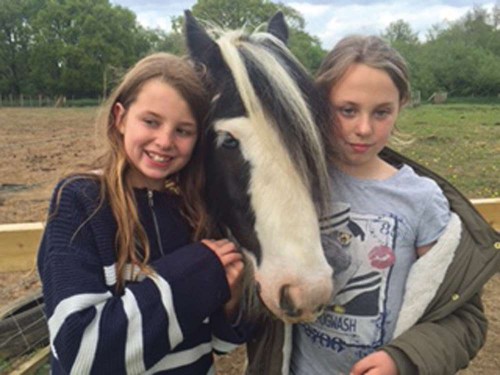 Amelia and Billie Mae with their pony

Looking to the future my long-term vision is to have an amazing care company, totally different to anyoneelse where it is far more personal, not too large. I won’t have any of this dashing in for half an hour, flicking a flannel round people’s faces and leaving. I don’t agree with ‘mass produced care’ at all. I was hoping to hand the business down to Stacey which would have been a natural progression, and then to retire. Her other sister Charis is 20 now. She is at University doing a psychology degree. My son Piers is 19 and the twins are only 10. I was hoping it would be a family business. I was hoping Charis would join the business at some stage in the future but she’s not showing any interest yet. Piers is just Piers! The twins are quite caring so maybe I will hand it down to them.

A year before Stacey died I was offered a lot of money for my company but I don’t regret not accepting their offer. Everyone encouraged me to keep it – ‘Don’t sell it, it’s your baby, you love what you do’ my friends said. You never know what’s round the corner do you? After someone dies people say it affects you spiritually but I’m an atheist. I’m sure there’s something out there. I do have a lot of signs from Stacey which pull me through especially at low points. But I don’t believe in God or heaven, I’ve not gone that way. Maybe that’s to come but at the moment it’s quite raw and as I said I’m having a lot of help coming to terms with it. I had Stacey when I was 19 years old. It was 10 years before I had any other children. There’s a big gap. It’s just horrible but I do believe I’m here for a reason. I can’t just give up. I have to fulfil that purpose. I think I’m pretty good at what I do and I will strive to do things better, in a more individual and varied way.

Walking in the garden with a patient