Home » Local Cranleigh » Joy Of Cranleigh – What was happening in Cranleigh in May 1916?
0

Joy Of Cranleigh – What was happening in Cranleigh in May 1916?

On April 22nd, George Edmonds of the Common died at the early age of 44. He had come to Cranleigh fourteen years previously and married Miss Margaret Johnston of New Park. Together they had acquired the Cranleigh Hand Laundry, and had built up a flourishing business on the Common, next to the Cranley Hotel. This provided jobs for over 20 women, besides deliverymen, and must have kept many grateful Cranleigh households in clean sheets. Margaret carried on the business alone for several years.

Empire Day was observed every year on May 24th.The Village School normally held a special service on the open gravel space between the school and the Lady Peak Institute (as in this pre-war picture).But in 1916 the service was held in the Rectory garden.Soldiers recuperating at the ‘Oaklands’ military hospital attended it, with members of the staff. After the service, the schoolchildren enjoyed a half-holiday.

The Parish Magazine carried an urgent plea for indoor footwear for the convalescents of ‘Oaklands’.Doubtless the village rose to the challenge. A ‘Smoking Concert’ was held for the wounded soldiers at the Greyhound Inn (where the Post Office now is), organised by the Dennis Dramatic Club. The aim was to provide cigarettes for the soldiers, and £2 was passed to the hospital’s commandant.

Two weeks later a further smoking concert was held there, with 20 wounded soldiers present. This time £2 13s was raised, to provide stamps and stationery. 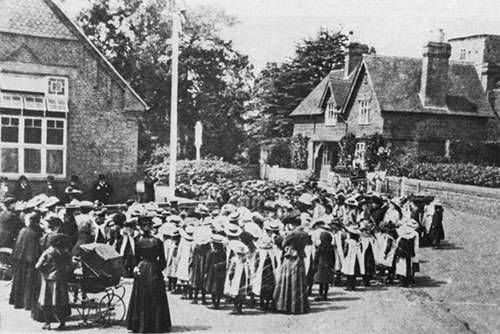 (Above:An Empire Day service before the War. Notice the girls’ pinafores and hats).

Arthur H. Sherriff, 32, master baker of Bank Buildings (where Roger Coupe is now), appeared before the Hambledon Tribunal this month, and stated that he had tried to sell his business so that he could enlist,but had been unsuccessful. He asked for time to enable him to dispose of it, and was granted three months. Interestingly, a Chiddingfold farmer,who applied for the exemption of his head carter,was asked if he employed women labour. He replied that he had tried one girl, ‘but … she is running after the soldiers at night, and every dinner-time as well.’

One item of good news resulted from the war. Every spring, the parish council decided how much tax should be levied to pay for the village street lighting, which was by gas. This year, they reported a balance in hand of £96, ‘which would probably cover expenses should the war end and lighting be resumed before the end of the coming winter’.Therefore no money needed to be raised! It sounds from this that there was no street lighting at all during the war.

In London, the musical review, The Bing Boys are Here, opened on April 19th at the Alhambra Theatre, Leicester Square. It included one of the most popular songs of the war. Had this bit of escapism reached Cranleigh yet?

(Below: George Robey, Violet Lorraine & Alfred Lester in ‘The Bing Boys are Here’). 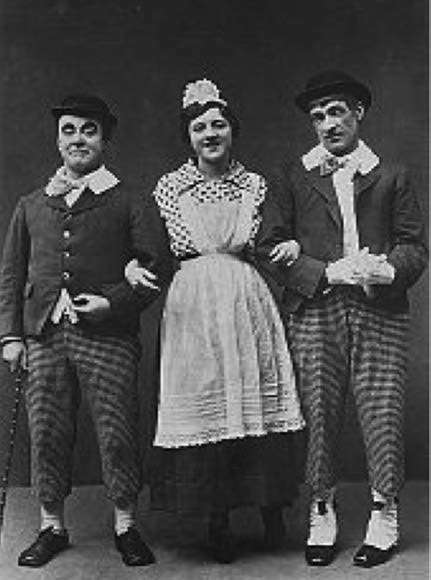 Nothing else would matter in the world today –
We could go on loving in the same old way.

A garden of Eden just made for two,
With nothing to mar our joy.

The Cranleigh History Society meets on the 2nd Thursday of each month at 8.00pm in the Band Room. The next meeting will be on Thursday 12th May, when Michael Edwards will speak on ‘Gertrude Jekyll’.

Back Crane Spotter – May 2016 – Swifts Will Be With Us Any Day!
Next Moroccan Chickpea Soup
Related Articles
No Comments